Twenty years ago, a group of Australian activists invented open source online publishing, by creating a website that went on to be pivotal in the Battle of Seattle protests.

The violent clash, which took place on November 30, 1999, between anti-globalisation activists and Seattle police, caught the world’s attention. It was also the first large-scale use of technology that allowed anyone to upload stories, photos, and video in a live feed to a website.

But this format, used on sites like Facebook and Twitter, was first conceptualised, coded and adopted by a handful of Sydney-based activists back in the 1990s.

These individuals were pioneers in kickstarting the digital disruption of mainstream media, and their actions enabled the world to openly and easily share content online.

Just days before the events in Seattle, two software programmers, Matthew Arnison in Sydney and Manse Jacobi in Colorado, posted a message on indymedia.org, a new website they had developed.

The resistance is global… a trans-pacific collaboration has brought this web site into existence. The web dramatically alters the balance between multinational and activist media.

The Seattle Independent Media Centre (Indymedia) website coordinated the protest and allowed reporters to share events to the world, live.

The original Indymedia logo used on the website in 1999, in all its 90s low-pixel glory. Matthew Arnison

The site received 1.5 million hits that week. Arnison had created a movement.

Indymedia’s model was developed by activists in Sydney, several months before it went live on November 30 from a small shopfront in Seattle.

Activist collectives Reclaim the Street and Critical Mass regularly took over public spaces in Sydney during the 1990s. 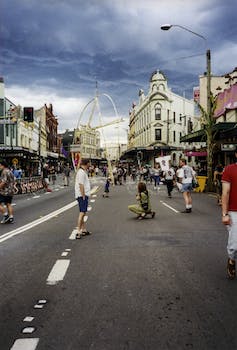 A Reclaim the Streets protest on November 6, 1999, at the corner of King and Wilson streets at Newtown, Sydney. (Private collection)

It was the protest-related needs of these collectives that spurred coders’ efforts to find solutions. Programmers including Arnison began writing code that allowed the sharing of stories, images, and live webcasting.

They built a website (j18.cat.org.au/) to allow global coordination and sharing of live video – what Arnison at the time called “frozen media nuggets”.

When the adapted and fine-tuned model went live in Seattle on November 30, word got out.

Wired Magazine covered a scene that foreshadowed the digital newsrooms of today. Arnison and his colleagues had created the first open sharing internet platform.

Arnison told me that before then, “it was very difficult to share photos and post text and stories online, it was impossible to do in real time and without technical skill and special type of access”.

Read more: Death on smartphones: in a world of live streamed tragedy, what do we gain?

Imagine a world where sharing a photo or a story online required complex computer skills and often took up to a day. And a “Kids Guide to the Internet” (in VHS) was required for “all that cybernet stuff”.

The start of Active Sydney

Active Sydney inspired the Seattle site in the way it created an online space for activists to share information about events and actions, using open source code that Arnison made available to anyone around the world wishing to do the same.

Sydney resident and cofounder Gabrielle Kuiper described the site at an Amsterdam conference in March that year as:

…an online interactive forum for information and inspiration about social change in Sydney… It’s the only website which is linked to an email list operating at a city scale.

These days we’re used to the idea of information as a commodity owned and exploited by global online corporations.

In the pioneering days of the internet, the beginnings of data commercialisation existed alongside the notion that “information wants to be free”. Hackers and cyberpunks created open source software that enabled the free flow of online content.

Open publishing is the same as free software. They’re both (r)evolutionary responses to the privatisation of information by multinational monopolies.

Looking back today, this seems ironic. But in 1999 there was a feeling that information and self-expression would tip the scales towards protesters.

Arnison notes there’s “a different type of asymmetry” at play now. He echoed theorist McKenzie Wark by saying that in today’s world, political economies rely on the asymmetry of information as a form of control.

Twenty years after the Seattle clashes, the roles of protester and politician are reversed.

In 1999, protesters used new online tools to challenge free trade. They deployed a form of citizen journalism that countered mainstream reporting, in a bid to share and obtain authentic messages.

Read more: The Punishing of Anonymous

Today, populist politicians want to be perceived as authentic, so they use live platforms like Twitter to get messages out directly and avoid the filter of mainstream media.

What we didn’t see coming

When Arnison spoke to me, he noted that one thing early activist communities didn’t predict was the proliferation of online trolling and hate speech.

Hateful and toxic posts were rare in those eventful early days, when a core activity drove content sharing.

Kuiper said at the time they “had no problems with people writing inappropriate or even boring news”.

“Twenty years ago we didn’t envisage how (the internet) could be corporatised or how personal data could be monetised,” she said.

Perhaps the internet will continue to mature and flip on its head yet again.

Arnison hopes so: “I am hoping … there will be a third stage … where we figure out how to manage that toxic behaviour which made this network so wonderful in the first place.”

Read more: How Facebook and Google changed the advertising game