Clive James has left a valuable legacy of astute observation and witty interpretation of his world through his writing. He has also left another legacy. He has increased public awareness of leukaemia by sharing his cancer diagnosis over the decade before his recent death.

Clive was diagnosed with leukaemia in 2010 along with kidney failure and the lung condition emphysema. When he discussed his illness publicly in 2012, he said:

I’m getting near the end. I’m a man who is approaching his terminus.

So, many people may be surprised to hear he died nine years after this diagnosis.

The type of leukaemia is defined by what type of white cells are affected. For example, lymphocytes are a type of white blood cell that help the body fight infection by producing antibodies. If they become cancerous, lymphocytic leukaemia results.

Leukaemia develops when the genes which help control the growth of the lymphocytes become altered. What causes this damage is not clear but there can be an increased risk in some families.

Clive James had chronic lymphocytic leukaemia. Around 1,000 Australians each year are diagnosed with this type. It’s most common in people over 60, and more common in men than women.

People can go to their doctor looking pale, and complaining of tiredness and breathlessness when exercising. They are anaemic (have low levels of red blood cells), and have high levels of white blood cells.

They may bruise easily and are prone to infections. Glands in the neck, the armpits and the groin may be swollen or there may be discomfort under the left rib cage because of a swollen spleen. They may have lost weight and have started to sweat at night. 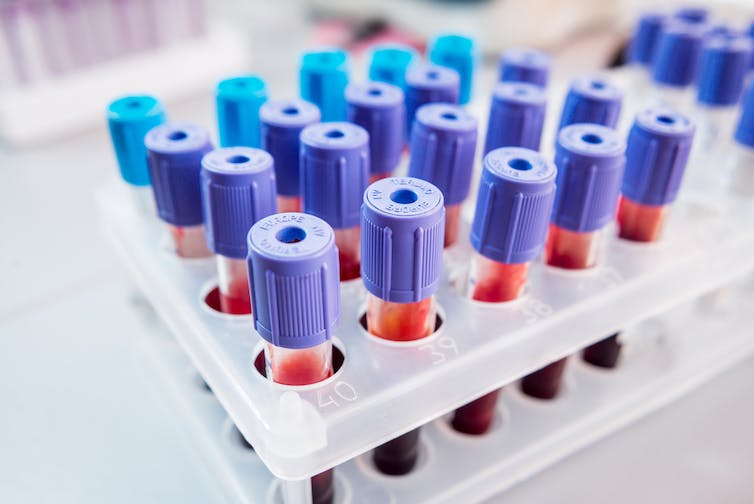 Some people do not have any symptoms. They find out they have chronic lymphocytic leukaemia after having a blood test for some other reason. from www.shutterstock.com

Many of these symptoms could be due to other causes such as a viral infection. But a diagnosis of leukaemia is made with a blood test showing increased numbers of white blood cells or a bone marrow biopsy (a sample taken of the bone marrow), which reveals the overgrowth of the abnormal white blood cells.

Some people do not have any symptoms. They find out they have chronic lymphocytic leukaemia after having a blood test for some other reason.

People with chronic lymphocytic leukaemia don’t need to be treated until they have symptoms. So it may be several years before treatment starts.

Then, the treatment is chemotherapy, commonly with the drugs fludarabine and cyclophosphamide. These are often combined with an antibody, rituximab, which targets the abnormal white cells.

Read more: Explainer: what is chemotherapy and how does it work?

These treatments will not cure the disease, but can help control it for long periods of time. Further drugs are also being developed.

People with chronic lymphocytic leukaemia are also advised to avoid infections, which may overwhelm a vulnerable or weakened immune system. Avoiding contact with people who are unwell, maintaining good personal hygiene and having flu shots are among what’s recommended.

The life expectancy of a person diagnosed with chronic lymphocytic leukaemia can range from a few months to several decades. The mid-range is around ten years, as it was with Clive James.

Just over 80 out of 100 adults diagnosed with chronic lymphocytic leukaemia will still be alive after five years.

This shows the type of leukaemia is vital to determining the time-course of the disease. Adults with chronic leukaemias survive much longer than those with acute leukaemias, where only a quarter of those diagnosed are expected to be alive five years after diagnosis.

About just under half of people with chronic lymphocytic leukaemia die when the disease progresses. Others die of infections because their immune system is not working as well as normal, and one-fifth of people die of other cancers. One-quarter die of illnesses unrelated to their leukaemia.

The burden of multiple illnesses

People can become very unwell when multiple illnesses add to their symptoms, reducing their quality of life.

An example is emphysema, permanent damage to the lungs often associated with heavy smoking. This restricted Clive James from flying and therefore returning to visit his Australian birthplace in his last years.

Although unrelated to chronic lymphocytic leukaemia, emphysema could increase the likelihood of lung infections when paired with it. Other illnesses can also make a person too weak to tolerate the side effects of their leukaemia drugs.

Clive James entertained and informed us as he shared his observations on his life through decades of writing. So it is fitting he should be publicly sharing the health issues that resulted in his death. As such, he provided one last opportunity to educate his readers — in this instance about leukaemia.

Read more: Clive James on death, dragons and writing in the home stretch