A team of scientists in Hungary recently published a paper that hints at the existence of a previously unknown subatomic particle. The team first reported finding traces of the particle in 2016, and they now report more traces in a different experiment.

If the results are confirmed, the so-called X17 particle could help to explain dark matter, the mysterious substance scientists believe accounts for more than 80% of the mass in the universe. It may be the carrier of a “fifth force” beyond the four accounted for in the standard model of physics (gravity, electromagnetism, the weak nuclear force and the strong nuclear force).

Read more: Why do astronomers believe in dark matter?

Most researchers who hunt for new particles use enormous accelerators that smash subatomic particles together at high speed and look at what comes out of the explosion. The biggest of these accelerators is the Large Hadron Collider in Europe, where the Higgs boson – a particle scientists had been hunting for decades – was discovered in 2012.

Attila J. Krasznahorkay and his colleagues at ATOMKI (the Institute of Nuclear Research in Debrecen, Hungary) have taken a different approach, conducting smaller experiments that fire the subatomic particles called protons at the nuclei of different atoms.

In 2016, they looked at pairs of electrons and positrons (the antimatter version of electrons) produced when beryllium-8 nuclei went from a high energy state to a low energy state.

They found a deviation from what they expected to see when there was a large angle between the electrons and positrons. This anomaly could be best be explained if the nucleus emitted an unknown particle which later “split” into an electron and a positron.

This particle would have to be a boson, which is the kind of particle that carries force, and its mass would be around 17 million electron volts. That’s about as heavy as 34 electrons, which is fairly lightweight for a particle like this. (The Higgs boson, for example, is more than 10,000 times heavier.)

Because of its mass, Krasznahorkay and his team called the hypothetical particle X17. Now they have observed some strange behaviour in helium-4 nuclei which can also be explained by the presence of X17.

This latest anomaly is statistically significant – a seven sigma confidence level, which means there is only a very tiny possibility the result occurred by chance. This is well beyond the usual five-sigma standard for a new discovery, so the result would seem to suggest there is some new physics here. 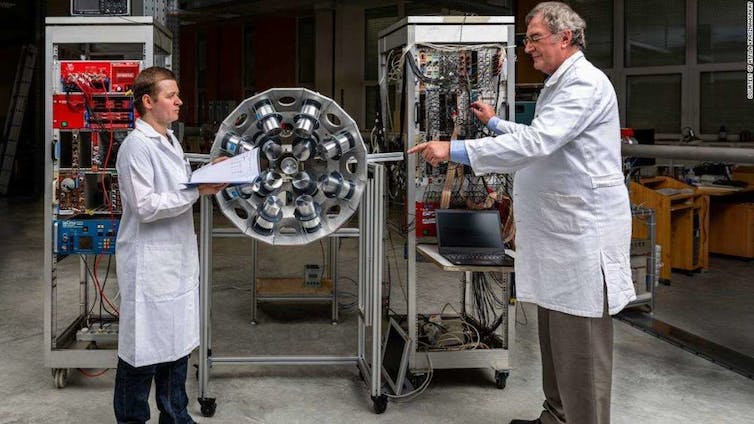 However, the new announcement and the one in 2016 have been met with scepticism by the physics community – the kind of scepticism that did not exist when two teams simultaneously announced the discovery of the Higgs boson in 2012.

So why is it so hard for physicists to believe a new lightweight boson like this could exist?

First, experiments of this sort are difficult, and so is the analysis of the data. Signals can appear and disappear. Back in 2004, for example, the group in Debrecen found evidence they interpreted as the possible existence of an even lighter boson, but when they repeated the experiment the signal was gone.

Krasznahorkay and his group first reported weak evidence (at a three-sigma level) for a new boson in 2012 at a workshop in Italy.

Since then the team has repeated the experiment using upgraded equipment and successfully reproduced the beryllium-8 results, which is reassuring, as are the new results in helium-4. These new results were presented at the HIAS 2019 symposium at the Australian National University in Canberra.

What does this have to do with dark matter?

Scientists believe that most of the matter in the universe is invisible to us. So-called dark matter would only interact with normal matter very weakly. We can infer that it exists from its gravitational effects on distant stars and galaxies, but it has never been detected in the lab.

In 2003, in one of us (Boehm) showed that a particle like X17 could exist, in work co-authored with Pierre Fayet and alone. It would carry force between dark matter particles in much the same way photons, or particles of light, do for ordinary matter.

In one of the scenarios I proposed, lightweight dark matter particles could sometimes produce pairs of electrons and positrons in a way that is similar to what Krasznahorkay’s team has seen.

This scenario has led to many searches in low-energy experiments, which have ruled out a lot of possibilities. However, X17 has not yet been ruled out – in which case the Debrecen group might have indeed discovered how dark matter particles communicate with our world.

While the results from Debrecen are very interesting, the physics community will not be convinced a new particle has indeed been found until there is independent confirmation.

So we can expect many experiments around the world that are looking for a new lightweight boson to start hunting for evidence of X17 and its interaction with pairs of electrons and positrons.

If confirmation arrives, the next discovery might be the dark matter particles themselves.