Scott Morrison is picking up that Australia’s devastating, prolonged fires are producing a soured, anti-government mood among many in the community.

It may not be entirely rational for people to turn on politicians in such situations. The actual fighting of the fires, driven primarily at state and local levels, appears to have been efficient.

But the government has invited anger in terms of the broad debate by being so inactive and partisan about climate change over years.

Morrison is struggling to navigate his way through these fraught days before Christmas. He’s stressing unity - “I want to reassure Australians, that the country is working together … to deal with the firefighting challenge”. He’s refusing to meet calls for a national summit or a COAG meeting on the fire effort, but he’s highlighting the federal government’s co-ordinating activities.

He’s placing the most positive spin he can on what Australia is doing on climate change, but all the time emphasising Australian emissions are only a tiny portion of the global total “so any suggestion that the actions of any state or any nation with a contribution to global emissions of that order is directly linked to any weather event, whether here in Australia or anywhere else in the world, is just simply not true”.

The fires are putting pressure on the government by elevating the climate issue and opening new division among Liberals. Only this time – and importantly - the internal wedge is coming from the left rather than the right of the party. The PM is being pushed to do more, rather than being held back.

Morrison is no longer able to gloss over the climate debate. The big question for the next year or two is whether he will reposition the government.

Read more: Now Australian cities are choking on smoke, will we finally talk about climate change?

Morrison is the ultimate pragmatist and so, if he sees it in his interest, he may well be willing to readjust. Not radically, nor quickly. Just enough, as and when he judges it, to satisfy middle ground voters.

He did a little of this before the election, when he topped up funding for “direct action” and advanced pumped hydro, although some read more into the shift than was there. 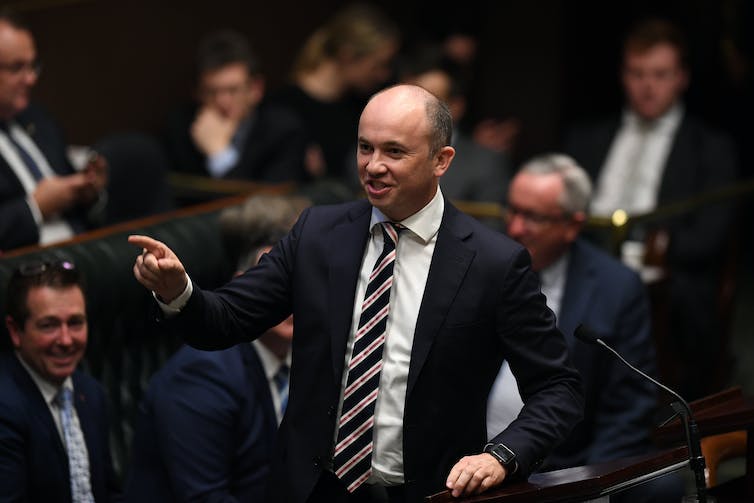 “Let’s not beat around the bush … let’s call it for what it is. These bushfires have been caused by extreme weather events, high temperatures, the worst drought in living memory - the exact type of events scientists have been warning us about for decades that would be caused by climate change,” said Kean, who is the leader at state level of the moderate faction.

Kean also notably acknowledged the “leadership” on the climate issue of Malcolm Turnbull (who again prodded the bear on Monday’s ABC Q&A).

One federal Liberal says, “for a long time [Kean’s line] is where the overwhelming majority of the party has stood [but] nobody was willing to say it. The community is so concerned it has given us the cover to come out and say it”. The MP points to the impact of the issue in Liberal heartland seats in Sydney and Melbourne.

Read more: It's the 10-year anniversary of our climate policy abyss. But don't blame the Greens

Yet it is the states’ targets for renewables that are helping the national effort on emissions reduction, according to figures just released by the environment and energy department in its report “Australia’s emissions projections 2019”.

Looking at Australia’s progress towards its 2030 Paris target of a 26-28% reduction on 2005 levels - which, incidentally, can only be reached via the much-criticised course of carrying over Kyoto credits - the report has revised down its 2018 estimate for projected 2030 emissions.

Reasons for this revision include the boost to the “direct action” fund and “stronger renewables deployment”. A factor in the latter was “the inclusion of 50% renewable energy targets in Victoria, Queensland and the Northern Territory”.

The projection is now for Australia to have renewables generating 48% of its electricity by 2030 – very close to the Labor policy of 50% of which the government was so critical.

Energy Minister Angus Taylor’s speech at the United Nations COP25 conference in Spain this week showed how, as the inevitable transition to clean energy progresses, the government is conflicted. Regardless of years of scepticism about renewables from the federal Coalition, Taylor in Madrid lauded Australia’s achievements in this area.

“In Australia, an unprecedented wave of low emissions energy investment is already underway,” he boasted.

“Last year, renewable investment was Australia’s highest on record at A$14.1 billion, which is world leading investment given our population. Renewables are now more than 25% of our electricity supply in our National Electricity Market.”

Read more: For hydrogen to be truly 'clean' it must be made with renewables, not coal

Reality is gradually proving stronger than ideology as the energy mix changes, but not entirely. The debate around a new coal-fired power station goes on. The government before the election promised a feasibility study into a possible venture in Queensland, and the Nationals continue to push for action.

If a feasibility study left the way open for a coal-fired station, would the government be willing to provide any financial help or guarantee for a portion of the energy output? Given the reluctance of private capital, that would likely be the only way it could happen.

There was a certain irony in Anthony Albanese touring coal country in central Queensland this week, given the climate debate.

Visiting Emerald, Rockhampton and Gladstone among other stops, Albanese was beginning his mission to reconcile the strands in Labor’s climate messages, after Bill Shorten failed to do so, costing vital Queensland votes.

This week Albanese has been talking up the domestic transition to renewables, while providing reassurance to the coal areas by declaring the world will continue to want Australian coal for the foreseeable future.

He says the role of government in relation to new coal mines is to make the environmental judgements; if they pass that test, then such projects live or die on their ability to raise private finance. On Adani, he says it has its approval and he’s urging it to get on with providing the jobs (the company says it is doing so).

As to a new coal fired power station: he believes it would not get private finance.

Very aware Shorten was smashed for trying to walk in different shoes on climate and coal when he was in the inner city and in regional Queensland, Albanese is aiming for a story to which he can get a favourable reception all round the country.

That won’t be easy. Then nothing is, for anyone, on the climate issue.