For 40 years I have studied bushfires in Australia. It has been my life’s work to try to better understand Australian landscapes and the interaction of humans and landscape fire.

As we contemplate a future where catastrophes like the one currently engulfing Australia become increasingly frequent, there’s an idea to which I keep returning: maybe it’s time to say goodbye to the typical summer Australian holiday.

Perhaps it’s time to rearrange Australian calendar and reschedule the peak holiday period to March or April, instead of December and January.

It’s easy to dismiss this idea as stupid but that’s the nature of adaptation. Things that once seemed absurd will now need serious consideration.

What’s truly absurd is the business-as-usual approach that sees thousands of holidaymakers heading directly into forests and national parks right in the middle of peak bushfire season.

Bushfire evacuees walking down to the beach at Mallacoota to board vessels and be ferried out to HMAS Choules. HELEN FRANK/Royal Australian Navy/AAP

All of the indications are that we are galloping into changing fire regimes. We can certainly see that with what’s occurred in the Australian alps (the snow country in southeastern Australia, near Mount Kosciuszko). There were incredibly intense fires there around the early 2000s and now those areas are re-burning.

To me, as a fire researcher, that’s an astonishing thought.

Yes, there have been very large fires in the past but they weren’t followed up with yet more very large fires a mere 15 years later. Normally, you’d be expecting a gap of 50 or 100 years. So the ecology is telling us that we are seeing the intervals between the fires shrinking. That is a really big warning sign.

One of the great exacerbating factors of this crisis is the fact that it’s occurring in a holiday period. It makes things incredibly difficult for emergency management. The fact is that it would be a lot easier for firefighters to focus on stemming fires if they didn’t also have to manage mass evacuations, and deal with populations that are dispersed and far from home.

It’s also really terrible for holidaymakers themselves. People are in desperate need of a break, to spend time with family. Instead of returning to work rested and re-energised, many will be stressed, tired, perhaps even traumatised. (And let’s not forget the firefighters themselves, also denied a break with friends and family over the holidays).

And having the major holiday right in the middle of bushfire season also means that many people are denied a chance to experience national parks, as authorities close them off to reduce risk. 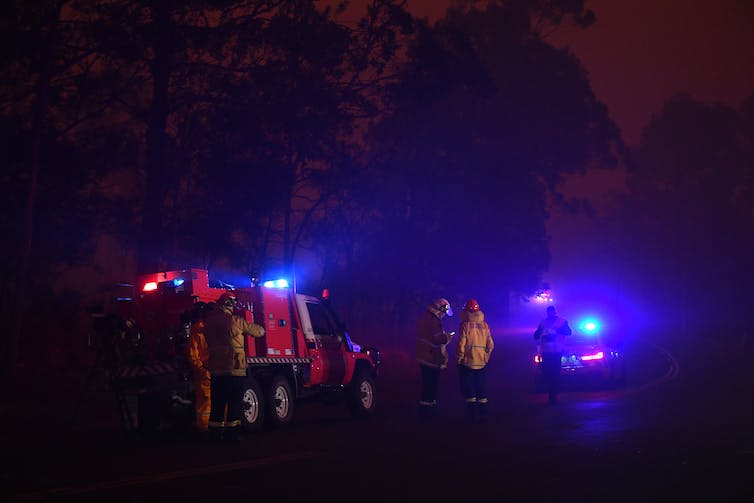 Rural Fire Service personnel at a roadblock near a bushfire in North Nowra, a popular holiday spot 160km south of Sydney. AAP/MICK TSIKAS

The old idea was that we can head off the crisis by reducing our emissions through decarbonisation. We had an opportunity to do that and we didn’t take it. We still have to decarbonise but now we also have to adapt.

And the sort of adaptation needed is not just about infrastructure, it’s also about the way we shape our lifestyle, our culture and traditions.

Climate change adaptation will nearly always be met with political, social and cultural resistance. It is not easy. But something like completely rearranging the Australian calendar around increased risks – it’s not even the biggest change required of us.

Some of the other things we are going to have to do will at first seem absurd, will be unbelievably painful economically and will require major adjustments.

There’s going to need to be a systematic change in behaviour and lifestyle as we adapt.

This crisis occurring in peak holiday time is highlighting the fact that the assumptions of normality we have got are being challenged by climate change.

It is confronting, but adaptation also brings with it great benefits – less loss of life, greater certainty and opportunity for businesses and holidaymakers, and smoother handling of fire crises as they emerge.

We need to put some serious thought into what future life will be like under climate change. Perhaps shifting peak holiday season to the cooler months is the place to start.