After reporting on the deadly 2011 Queensland flash flood disaster, I spent a year documenting accounts of heroic rescues, tragic deaths and extraordinary survival.

Five years later, I returned for a follow-up study. I found some survivors had recovered, but many were far worse off.

This research suggests there is a long road ahead for survivors of the current bushfire crisis. However, there are key lessons to be learned.

At the time of the 2011 Queensland flood crisis, the Australian Defence Force arrived to help. Community spirit was high. Australia and the world donated very generously.

Blanket media coverage of the crisis soon dwindled. And for many people, there simply was no return to “normal” life. 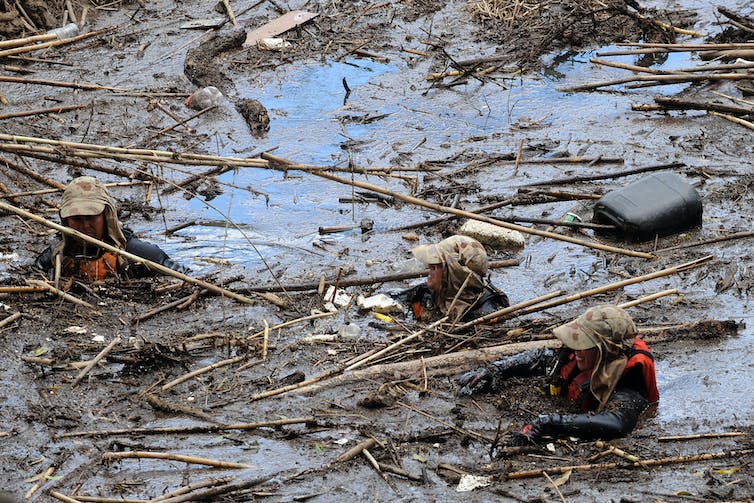 Police divers conducting a search amongst debris in waters around Grantham in the Lockyer Valley shortly after the 2011 flash floods. AAP/DAVE HUNT

Five years after the event, many still struggled. The journey was far longer and more difficult for people who:

After five years, some people realised they would never recover. Some said they would have preferred to die than endure the five years post-flood.

Several survivors spoke of the “near miss” they had with death. For some, it was an incentive to live every day with renewed gusto. For others, the near miss reinforced the fragility of life and left them feeling more vulnerable. 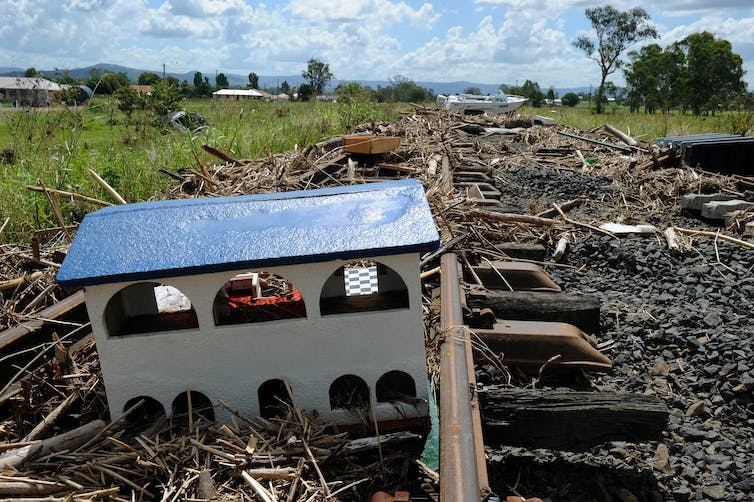 A dolls house sits amongst debris on the railway line through Grantham in the Lockyer Valley, shortly after the 2011 flash floods. AAP/Dave Hunt

Thirty-three of the rescuers and survivors in the disaster experienced a near-death experience. Five years on, some of them had still not attended any counselling and reported memories of near-death experiences playing out in their minds in an endless video-loop. Some became hermits, afraid to leave home.

One of the rescuers told me it took five years to even acknowledge he had risked his life.

One mother whose children were at risk said:

Life as you know it changed on that day. You know that one second your life is normal and then how quickly things can change. I scan all the time. I scan rooms for the exit. I scan terrain in case something happens […] which is the quickest way to escape?

Two thirds of the people interviewed still had ongoing traumatic memories five years after the disaster – including seeing or hearing the sounds of the disaster, smelling the fetid aromas associated with floods or feeling anxious at the sound of helicopters.

For some, the trauma triggers occurred only in the flood zone, while for others it could be anywhere, whcih meant moving away offered no respite.

Read more: It's hard to breathe and you can't think clearly – if you defend your home against a bushfire, be mentally prepared

In the small town of Grantham, where 13 people died, witnesses told an inquiry into the disaster that counsellors changed from week to week (meaning survivors had to retell their stories again to a new counsellor). The service then stopped because townspeople didn’t want to see them. 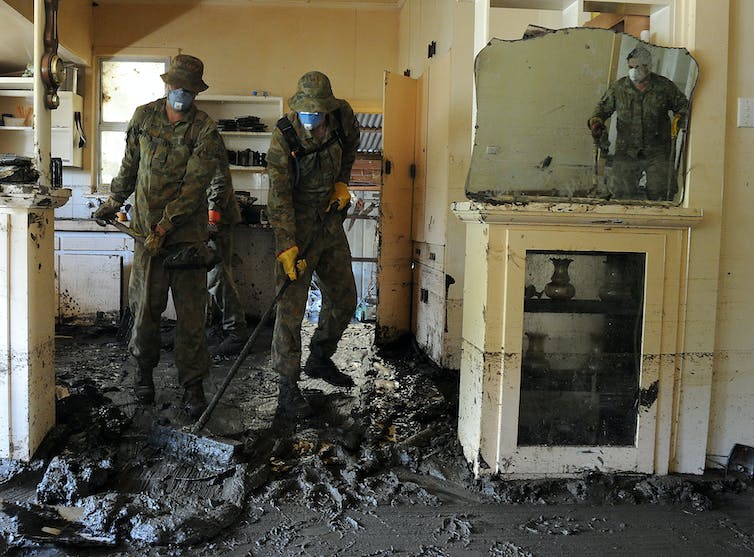 Return or move away?

Many people no longer felt safe at home. People who had to rebuild as property values fell and insurance premiums skyrocketed – some up to A$34,000/year – could not afford to insure their house. They feared a total loss of their homes next time.

Some people who never returned to affected towns fared better psychologically than those who did go back.

Some people returned initially, rebuilt, but then sold up and left again. Some told me they would not be alive unless they got out when they did.

Whole communities all but disappeared as almost the entire population left town. 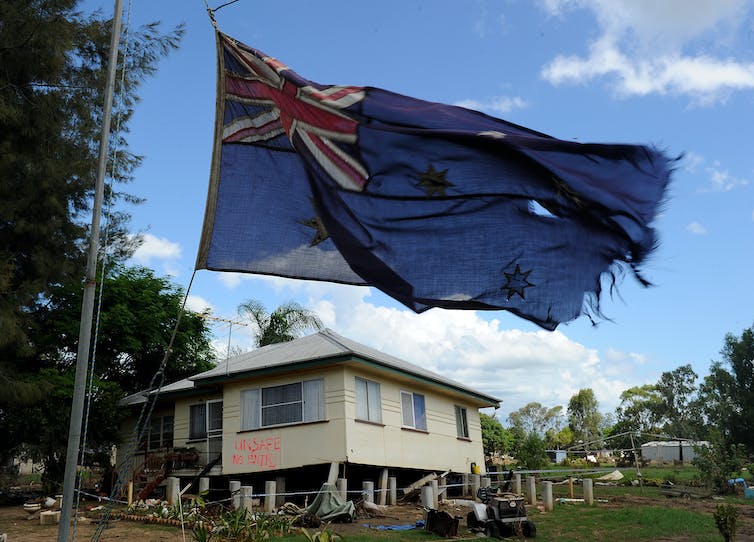 After a natural disaster, mortgages still need to be paid, even on houses that are uninhabitable. Accommodation costs mount. The risk of homelessness and bankruptcy increases and relationships can be put under enormous stress.

Property values in the towns and districts affected by the 2011 floods fell dramatically and immediately, meaning some people couldn’t sell and move away.

Several survivors were unable to return to their old jobs because their workplace had been destroyed or because it was too traumatic.

One who stayed to rebuild his business experienced another disaster two years later and lost his service station a second time. He rebuilt again only to have his business destroyed a third time the following year.

People who are injured at work in Queensland are eligible to claim on WorkCover, a government funded program that assists workers to recover and return to work. People injured in disasters, however are not eligible for the same type of assistance.

Many people relied on charities for food, clothes and shelter for months to years after the flood. Some refused or resisted charitable help or government help.

Some older people reported becoming dependent on their adult children for the first time. 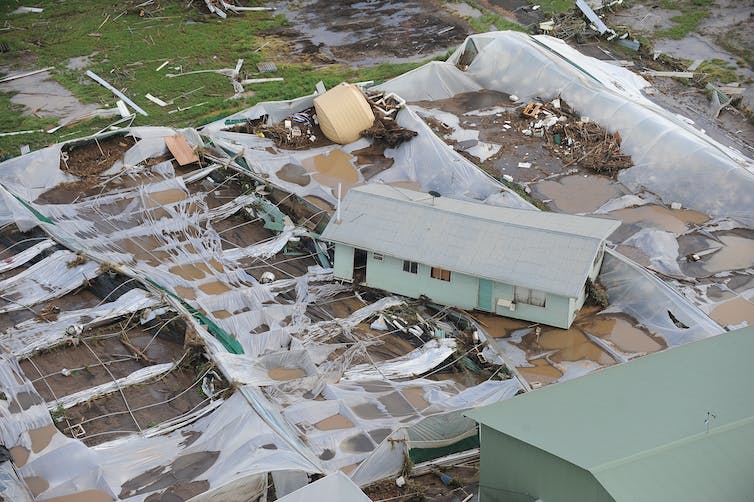 A house finds its resting place after floating away in flood waters in the town of Grantham, where flash floods hit in 2011. AAP/Dave Hunt

The research suggests several possible ways to help natural disaster survivors including, but not limited to:

All of this sounds expensive. But the cost of not learning these lessons may be greater in the long run.