Industrial livestock farms or factory farms account for more than 50% of global pork and poultry meat production and 10% of beef and mutton production. Graphic exposés of how animals are...

Industrial livestock farms or factory farms account for more than 50% of global pork and poultry meat production and 10% of beef and mutton production. Graphic exposés of how animals are processed in such places rarely fail to shock us.

It’s important to keep the welfare of animals at these facilities at the forefront of the story. But along the way, it is worth remembering that working in these environs can have devastating impacts on abattoir employees, too.

Australian research suggests repeated exposure to violence in an abattoir causes psychological damage. It found aggression levels among meatworkers were so high they were “similar to some reported for incarcerated populations”.

A Human Rights Watch report also named meatpacking as “one of the most dangerous factory jobs in America, with injury rates more than twice the national average.”

So before you next go food shopping, its worth learning more about the human suffering behind meat production. 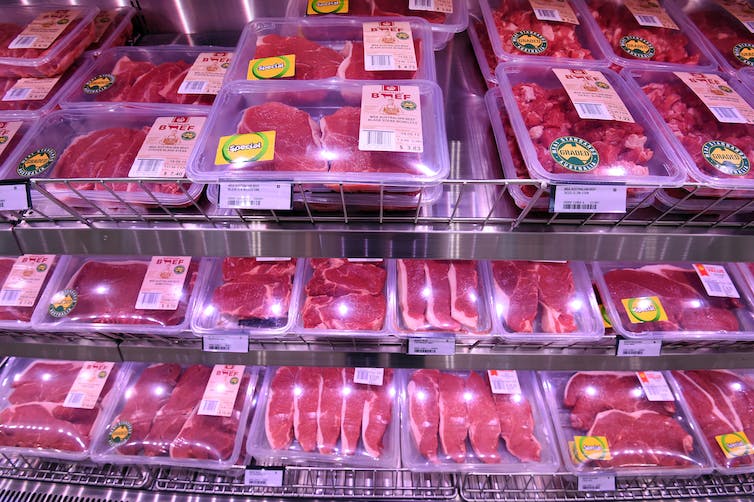 Research has shown the occupational hazards faced by abattoir workers include:

The industry also tends to have high levels of turnover and absenteeism.

The hazards are psychological as well as physical. One paper on the psychological harm suffered by slaughterhouse employees in the US noted that abattoir workers

view, on a daily basis, large-scale violence and death that most of the American population will never have to encounter.

Another study noted relatively high levels of anxiety, anger, hostility and psychoticism among slaughterhouse workers. Symptoms can also include violent dreams and some workers seek treatment similar to that used to help war veterans. 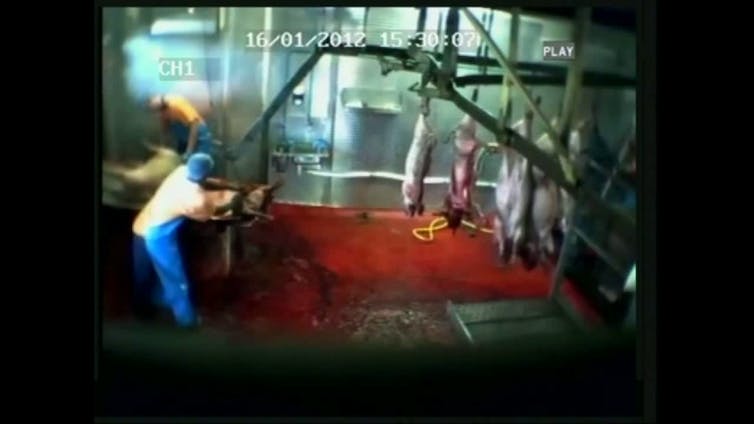 Surprisingly, Flinders University research has found female abattoir workers had higher propensities for aggression – particularly physical and verbal – than their male colleagues. The study had a small sample size, but pointed to the need for more nuanced research into meatworkers, including gender differences.

‘Down in the blood pit’

The work is monotonous and unrelenting. Author Timothy Pachirat, who wrote about his time working at a slaughterhouse in the US, notes

the reality that the work of the slaughterhouse centers around killing evaporates into a routinized, almost hallucinatory blur. By the end of the day […] it hardly matters what is being cut, shorn, sliced, shredded, hung, or washed: all that matters is that the day is once again, finally coming to a close.

Author Gail Eisnitz, who researched the industry for a book, quoted a slaughterhouse worker as saying:

Down in the blood pit they say that the smell of blood makes you aggressive. And it does. You get an attitude that if that hog kicks at me, I’m going to get even. You’re already going to kill the hog, but that’s not enough. It has to suffer. 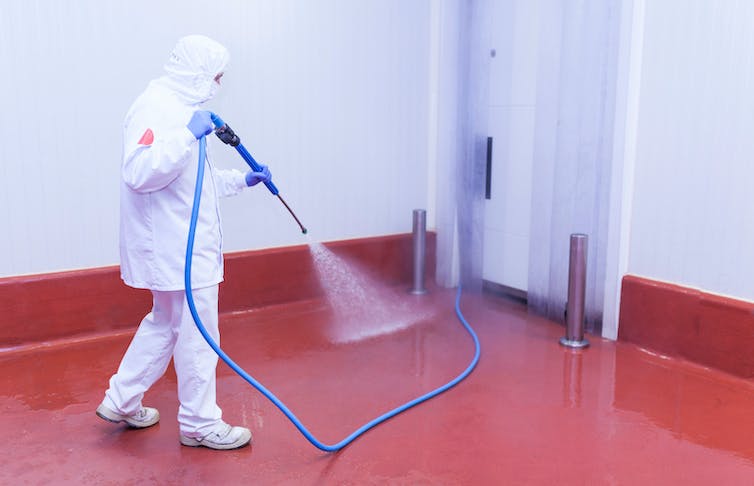 It’s not an easy job. Shutterstock

One news investigation said of employees in slaughterhouses that they are:

most often immigrants and resettled refugees, slaughter and process hundreds of animals an hour, forced to work at high speeds in cold conditions, doing thousands of the same repetitions over and over, with few breaks.

US researcher Stephanie Marek Muller, in her paper Zombification, Social Death, and the Slaughterhouse: US Industrial Practices of Livestock Slaughter, argued:

Another study in the US called for a closer examination of a possible link between animal abuse and violence between humans, including in “institutionalised social practices where animal abuse is routine, widespread, and socially acceptable.”

Meat on the consumer’s plate today is often distanced from the reality of suffering of non-humans and humans alike.

More research in this field is needed. But what’s clear is that working in an abattoir can be extremely taxing – both physically and psychologically.

So when buying farmed meat, perhaps spare a thought for not just the animals but also the workers who helped produce it.