This championing of Australia’s record, however, sits oddly beside our own well-publicised violations of human rights, most visibly on asylum seekers and Indigenous rights.

My new book, Human Rights in Twentieth Century Australia, probes this contradiction. One of the questions I grapple with is how a nation that crows of its achievements in certain areas of human rights can so flagrantly breach others.

One answer is that Australia has long used its British heritage of civil and political rights and higher average standard of living to discount more expansive social, economic and cultural rights, particularly when it comes to questions of race and citizenship.

It is often forgotten that Australian representatives joined those of seven other nations to draft the Universal Declaration of Human Rights, adopted by the UN General Assembly in 1948.

Attorney-General Herbert Vere Evatt headed the negotiating team. He argued for a strong document enforceable by an international court, which would defend traditional “negative” rights like freedom of expression, alongside “positive” ones such as the right to work.

Even at this high point of global consensus following the second world war, Australia’s double-handed approach to human rights was apparent. While Evatt likened the UDHR to Australia’s sentimental belief that everyone deserves a “fair go”, he guaranteed the White Australia Policy would not be threatened by such a document. 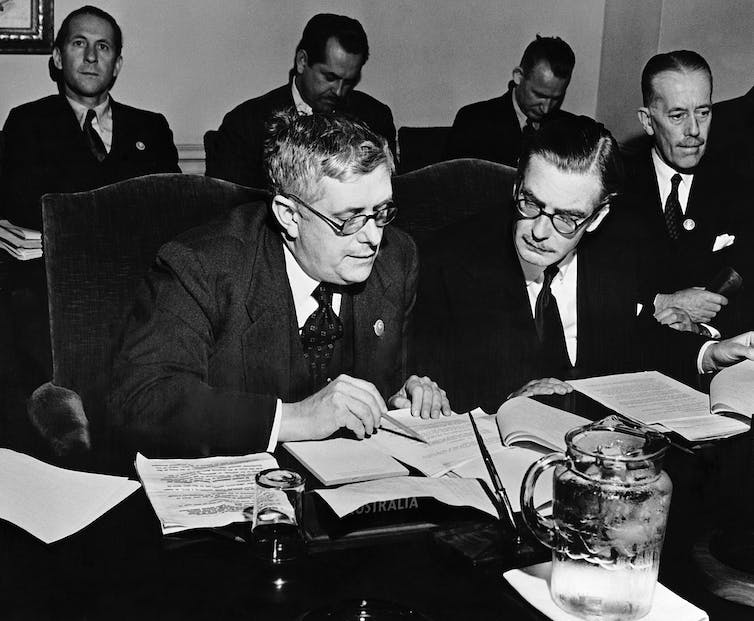 There is no relationship between the Declaration of Human Rights […] and the exercise by a country of its national right […] to determine the composition of its own people.

This argument for the primacy of so-called “domestic jurisdiction” was also extended to the rights of Indigenous peoples by Evatt and other Australian leaders at the time, meaning their rights were considered to be only of national concern.

The Communist newspaper Tribune captured this in a cartoon depicting the worldly Evatt set against an enchained Indigenous man to whom rights had little meaning.

By positioning itself as a responsible “middle power” on human rights, while also insisting it be judged by a scorecard of its own choosing, a benchmark was set for future Australian governments.

Human rights have, henceforth, been understood very restrictively in Australia.

Despite such evasions, Indigenous people, refugees and other social movements have long used human rights discussions and debates to further social and political agendas.

Chinese wartime refugees, dubbed a “recalcitrant minority” by Immigration Minister Arthur Calwell, were threatened with deportation in 1949. They petitioned the newly formed Australian Human Rights Commission, protesting “in the name of humanity” for their protection “from the arbitrary and inhuman actions” of the minister.

While Australia insisted the country’s Indigenous policy accorded with the UN’s language of equality, a 1970 petition by five Indigenous Australians - delivered in person to the UN offices in New York - declared nothing had changed.

Alleging the ongoing “literal, physical destruction of our people”, the petitioners demanded Australia be judged

in light of what it does […] rather than what it says. 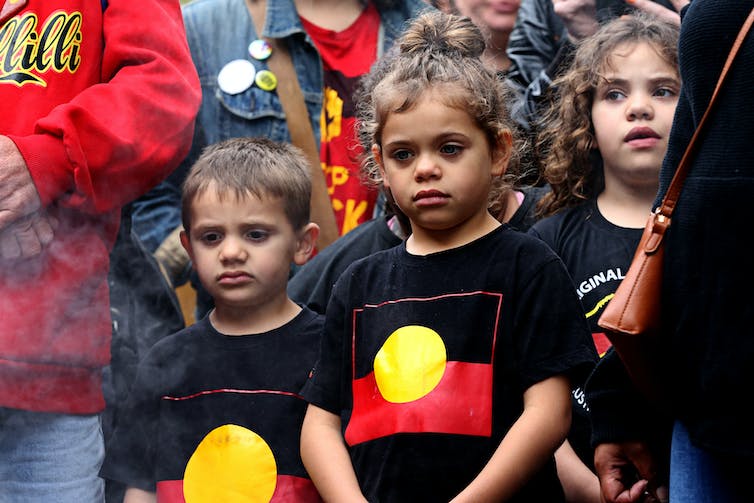 Indigenous peoples have been petitioning the Human Rights Commission for greater recognition of their rights since the 1960s. Danny Casey/AAP

From collective to individual rights

Starting in the late 1970s, the focus of international human rights shifted. Protecting individuals from suffering and violence replaced the fight for collective economic and social rights that defined the era of decolonisation in the 1950s and ‘60s.

Groups like Amnesty International, which won the Nobel Peace Prize in 1977, made political prisoners and basic sufficiency the watchwords of rights activism.

Economic, social and cultural rights were thus downgraded in importance compared to civil and political ones. Such a focus imposed few obligations on Australia, already a constitutional democracy governed by the rule of law.

Gareth Evans, attorney-general under the Hawke government, said in 1978 the very idea of economic and social rights was:

beyond the scope of the topic ‘human rights’ as that term has meaning in this country.

Since the late 2000s, though, the ground has moved quickly. On one hand, Australia’s continued violation of Indigenous rights has garnered more international condemnation.

The failure to deliver on the promise of constitutional recognition – one of the “pillars” of Australia’s Human Rights Council bid – seems particularly egregious.

The Declaration on the Rights of Indigenous Peoples in 2007 has also created reporting and compliance mechanisms unavailable to earlier generations. Under this declaration, the UN has already condemned the so-called “Intervention” in the Northern Territory and the revelations of abuse at the Don Dale detention centre.

Western governments like Australia are also back in the crosshairs on economic rights.

It’s now necessary to view human rights as a “package”, Naidoo said, including renewed focus on economic rights. And importantly, western and non-western nations can - and must - be judged on an equal footing.

Australia has already seen what this future looks like. The UN’s special rapporteur on extreme poverty, Phillip Alston, recently said in a widely publicised report the so-called “Robo Debt” and Cashless Welfare Card schemes were bringing forth a “digital welfare dystopia”.

Australia should expect more uncomfortable finger pointing in future. If we are to remain a human rights leader at home and abroad, the ranking of some rights as more important than others must come to an end.