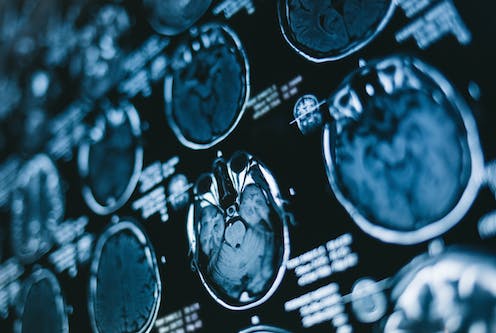 Changes in brain temperature can indicate there is a disease developing, but researchers have struggled to measure it. The use of conventional thermometers is very invasive, and remote...

Changes in brain temperature can indicate there is a disease developing, but researchers have struggled to measure it. The use of conventional thermometers is very invasive, and remote measuring techniques are blunt and often inaccurate.

But a new technique that combines infrared light with temperature-sensitive nanoparticles could be the solution.

Temperature is tightly regulated in living beings, so sudden changes usually indicate that something is amiss. The brain is no exception to this. Brain temperature depends on neural activity, and will vary if blood flow is disrupted (as occurs, for instance, in stroke).

Brain temperature is not only relevant for diagnosing conditions, it can also be harnessed for therapeutic uses. Heat can kill cells, which may be useful in treating tumours. Manipulating brain temperature can also activate or suppress neural activity, which may be used to alleviate the symptoms of some neurological disorders, such as Parkinson’s. 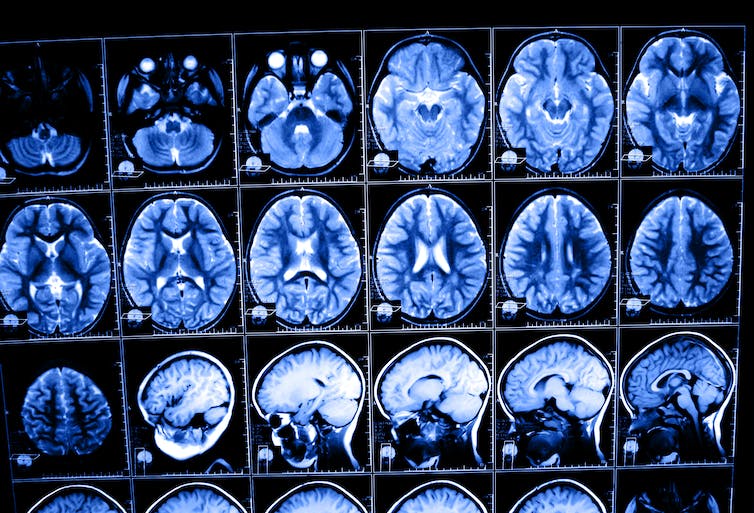 The brain is very complex and well-protected, which makes it difficult for researchers to measure its temperature. Shutterstock/Nata-Lia

Researchers have struggled to detect neurological disorders based on changes in brain temperature. This is because it is difficult to measure brain temperature accurately with current technology.

The brain is not only extremely complex, it is also very delicate and well-protected. To make matters more complicated, brain temperature changes associated with significant variations in neural activity are usually small (below 1℃) and may occur very rapidly over a small area.

Conventional thermometers are not a great option for sensing brain temperature. They require contact with the object they are measuring – so in this case, they need to be inserted into the brain itself. This very invasive procedure requires drilling a hole in the skull and can damage and scar the brain permanently.

The reward for such a risk is very limited. These thermometers can only measure the temperature at a single spot, making them useless to understand how it changes across different brain regions.

There are options for remote temperature sensing, but they also fail at mapping brain temperature effectively. They can only record surface temperature, or are not sensitive and fast enough.

Measuring temperature without entering the brain

To measure brain temperature accurately, we need a very sensitive technique that can measure small temperature changes remotely, in real time, and with good spatial resolution. This is where near-infrared fluorescence comes in.

Fluorescence is a common technique for high-resolution, real-time imaging of cells. Researchers use contrast agents (dyes or nanoparticles) that emit visible light when illuminated. Some of these contrast agents change their fluorescence depending on the local temperature, acting as local, tiny, thermometers.

But fluorescent thermometers that emit visible light are not very useful when it comes to measuring temperature below the skin surface – they would only be if our skin was transparent.

The skin, however, is quite transparent to near-infrared light, and the same is true for fat, muscle and bone.

Visible light is just the part of the electromagnetic spectrum that our eyes can see. Invisible, near-infrared light has a slightly shorter wavelength that our eyes – and conventional fluorescence imaging cameras – cannot detect.

Using near-infrared fluorescent contrast agents, researchers have been able to see blood vessels in the brain through the skull in live mice – even tiny vessels no thicker than a few microns (one thousandth of a millimeter).

Some near-infrared nanoparticles are highly sensitive to changes in temperature. Combining them with wide-field fluorescence imaging, it is possible to measure the temperature of the brain temperature through the scalp and skull - no drill holes or inserted thermometers required. 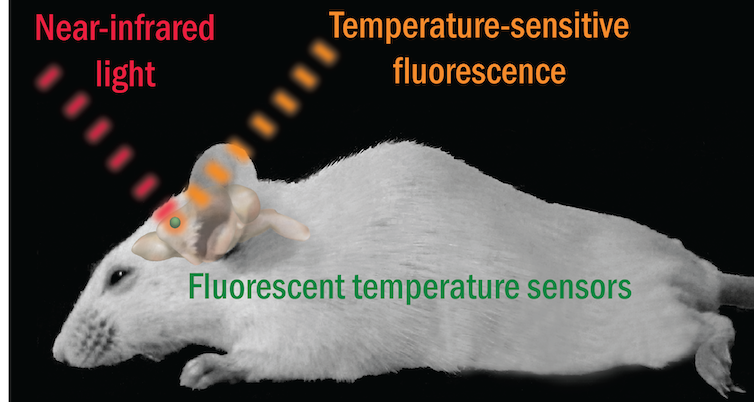 My research used this technique to see, in real time, how brain temperature drops in live mice after drug administration. Near-infrared fluorescence thermometry can help us understand how brain temperature and neurological diseases are related – eventually leading to the application of temperature-based diagnosis in humans.

For this technique to become fully useful, the delivery of the temperature-sensitive contrast agents still needs improvement. Having them reach the brain and stay there for as long as required – without altering the function of the brain – is still a major challenge. To avoid invasive brain injections (as we used in our work), the next step is developing an efficient method to get the contrast agents across the blood-brain barrier.