The recent killing of Hannah Clarke and her three children by her estranged husband has raised national attention to the types of behaviour that might lead to such a horrific crime, and how we might spot it early enough to intervene.

Researchers have known for decades most family violence involves forms of abuse other than physical violence, such as social isolation, emotional abuse and financial abuse.

However, we are now experiencing a watershed moment where the broader community is starting to recognise that too.

Read more: Why do men kill their families? Here's what the research says

Evidence is mounting that Hannah’s husband had a long history of psychological abuse and controlling behaviours, sometimes called coercive control.

This is something we and others believe should be a crime in all jurisdictions across Australia.

In a nutshell, coercive control is a collection of behaviours designed to strip someone of their sense of autonomy and self-worth. Some examples of these behaviours include removing male contacts from a partner’s social media, dictating where and when their partner sleeps and eats, threats of self-harm if the relationship ends, and physical violence.

Perpetrators are nearly always male. And research by the UK charity SafeLives shows perpetrators can come from all works of life and social demographics.

There is a recognised timeline of behaviours that tend to occur before one partner (or ex-partner) kills the other.

A review of 372 intimate partner homicides in the UK found many men who kill their intimate partners (and it is almost always men killing women) followed an eight-stage homicide timeline.

The eight stages that tend to lead to one partner killing another.

For instance, the offender tends to have a history of abuse (either against the same or a different victim), the relationship often doesn’t start out as abusive, their behaviour tends to gradually become controlling, there’s a trigger (such as the end of the relationship) and then they escalate and kill their partner. There are clear similarities between the killing of Hannah and her children and this timeline.

Because we can predict these incidents, perhaps we can prevent them.

Just as importantly, not only is coercive control a warning sign for intimate partner homicide, it is also a wrong in itself. Victims report coercive control is often worse than all but the most extreme physical violence.

Tasmania is the only jurisdiction to have made certain coercive controlling behaviours (in particular, economic abuse and emotional abuse) criminal offences in Australia.

But we and others believe coercive control should be a criminal offence in its own right in each state and territory.

Such criminalisation needs to be part of wider reforms to address the unacceptable reality that a current or former partner murders a woman every week in Australia, and millions of Australians experience emotional abuse by an intimate partner at some stage in their lives.

Read more: It's time 'coercive control' was made illegal in Australia

How has this worked internationally?

England and Wales made coercive control a crime in 2015. Ireland and Scotland followed suit in 2019, with promising early results in Scotland. And last week a Californian senator introduced a bill to criminalise coercive control.

To illustrate the types of cases these laws might apply to, consider the first successful conviction for coercive control in Ireland.

According to media reports, Kevin Dunleavy called his partner nearly 6,000 times in three months (more than 60 times a day). He made her take her phone with her when she left the house. He made her answer video calls so that she could show him where she was and who she was with. He threatened and attacked her. And he burned her clothes so she couldn’t leave the house.

Because the court could look at his behaviour as a whole, he was given a sentence that reflected the overall seriousness of his behaviour, nearly two years in prison.

In jurisdictions other than Tasmania, the types of behaviours we might call coercive control are recognised as forms of family violence. But, generally, these behaviours can only be prosecuted as a breach of an intervention order (otherwise known as a domestic or apprehended violence order).

This is an issue because many women who need protection do not have intervention orders. Even when they do, police don’t always take action when those orders are breached. And it sends the wrong message to victims: that these behaviours are only wrong if a court order is in place. 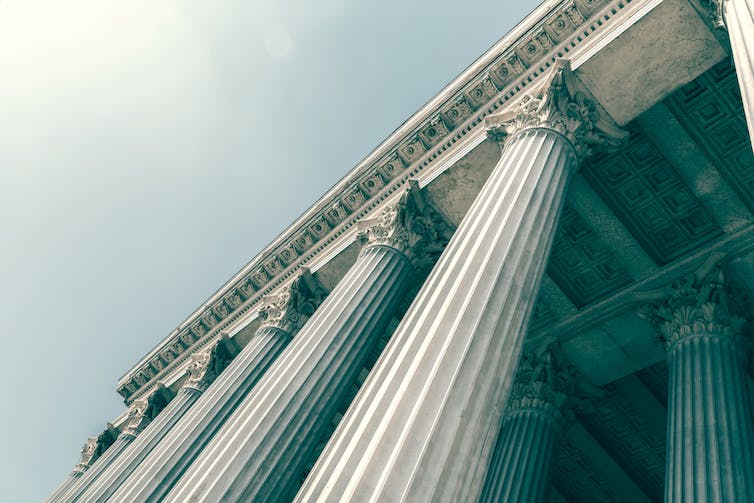 Not all victims of coercive abuse go to court to get an intervention order, so are not covered by existing domestic violence legislation around Australia. from www.shutterstock.com

Criminalising these abusive behaviours demonstrates our strongest denunciation of them. It legitimises victims’ perceptions that what they are experiencing is unacceptable. It gives the broader community a language and shared understanding that can lead to long-term changes in attitudes. It gives police and others in the justice system a tool to intervene. And because of that, it may even save some lives.

There are, though, some concerns. Most importantly, the criminal justice system already struggles to respond to physical violence. And women are often misidentified as the perpetrator, especially in intervention order proceedings. Why should we expect it to do any better with the more complex concept of coercive control?

The answer, which is supported by conversations we’ve had with police and service providers in the UK, is that with proper resources and training, criminalising coercive control becomes more than just adding another crime to the thousands already in the statute book.

It necessitates a fundamental shift in the way police, prosecutors and judges see domestic abuse, not as a series of separate events but more like the way victims experience it: cumulatively, and comprehensively.

Criminalising coercive control isn’t, though, as simple as just cutting and pasting from one jurisdiction to another. It would require a detailed review what’s happened in other countries, and how best to legislate in each state and territory. It will also take time to implement, and uptake may be slow, as has been the case in England and Wales. That is, this isn’t the sort of reform that can happen overnight.

Instead, criminalising coercive control is the kind of reform that, done right, could lead to generational change in how we as a society conceptualise domestic violence.

If this article has raised issues for you or someone you know, contact the national sexual assault, family and domestic violence counselling service – 1800 RESPECT (1800 737 732).