Last week, Russian President Vladimir Putin denied using a body double, saying he’d been offered one before but declined. The rest of us, in our glorious anonymity, might take up the offer. An actual person could shadow us through daily life. They could hold us tight while we attend to the task of living. They could reply to emails, chauffeur children and stand in for us at work while we go to the beach instead.

Common to the works is the use of shadows, body doubles and mirrors, many of which challenge a straight forward understanding of photography and the moving image.

The camera can lie

Shadow Catchers shows that since the first photography in 1827, the medium has given us truthful copies of ourselves and the world. However, we also know it is easily exploited. In the era of fake news, we increasingly question the veracity of images.

One of the oldest works in the exhibition, Clarence H. White and Alfred Stieglitz’ 1907 work Experiment 27 (lady in white with crystal ball), shows images have long performed a dual function of revealing but also manipulating or concealing reality. The exhibition presents us with distortions, mirror images and doppelgangers and brings us truth and fiction in equal measure.

Viewing the works of Patrick Pound, Jacky Redgate and Debra Phillips, I wondered whether I was seeing the moon, the Earth, a UFO, a mirror or a simple ball. 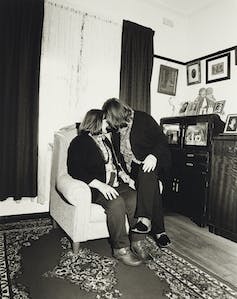 I was drawn into the cosy domestic space of what I thought was a lesbian couple. Instead, I was being intimately invited by Emma Phillips to witness the tenderness of twin attachment.

Ilse Bing’s intimate self-portrait from 1931 illustrates the central curatorial premise, duplicating her dark beauty in a staging of two angled mirrors where she looks both at us and away from us.

Other highlights include eight imposing photographs by Eugenia Raskopoulos. Activating the illusory properties of the mirror after a hot shower, letters from the Greek alphabet are wiped onto the steamy surface. 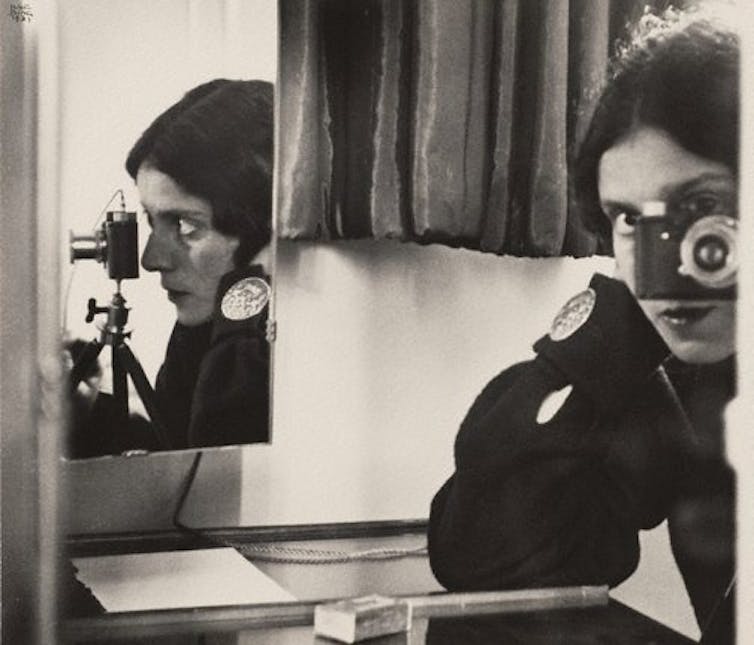 Merilyn Fairskye’s large scale portraits, printed on a plastic substrate, emit a shadow onto the wall behind them and create a schism that gently ruptures the faces of her subjects.

Body double, a work by Julie Rrap, is the centrepiece of the exhibition. The artist has worked with notions of the double in sculpture, video and photography since the early 1980s. Two silicon rubber casts of the artist’s body lie corpse-like on a stage, one face down and one face up. A ghost-like figure of a man or a woman is projected onto the bodies. The projection of the body rolls across the stage from one figure to the other, appearing to resuscitate the silicon forms. 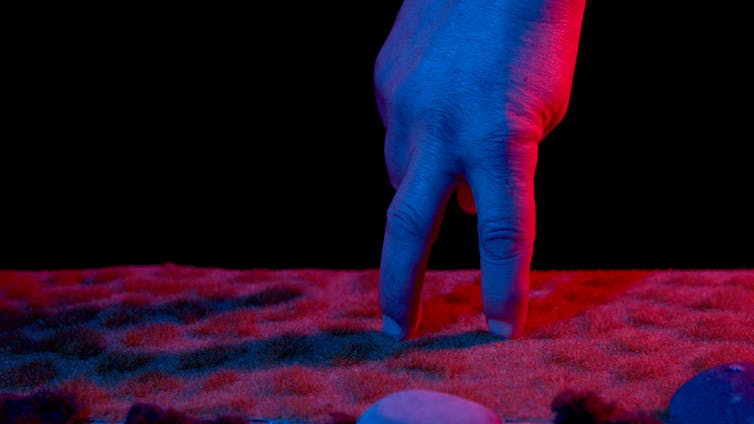 The organisation of the works across four rooms intermingles historical works with the contemporary, reminding us that the present is always informed by the past.

The exhibition offers a poetic reflection and critical account of our enduring fascination with technologies of representation.

While the exhibition successfully returns us to photography’s past and the defiant contribution of postmodern approaches to “doubling”, it neglects to question our current and future predicament.

The world today is saturated, even drowning, in shadows, which we are too slow or too tired to catch. Today we share the world with millions of our body doubles whether we want to or not.

Shadows and mirrors follow us through daily life and reflect us in the screens of our digital devices, ultrasound images, x-rays, dentists’ moulds; our experience of ourselves in the world is constantly mediated through the experience of seeing ourselves duplicated. Bitmoji, digital avatars, gaming skins, VR personas, Instagram feeds, CCTV surveilance and passport scans mean we have plenty of body doubles lurking in cyberspace.

It is suggested we live in a post-photographic time. What this means is that technology is creating images of and with us, for and not for us. These may be better or worse than our mortal bodies and mostly beyond our control.

Shadow Catchers is showing at Art Gallery of New South Wales until May 17.