It’s nigh on impossible to calculate with accuracy how many ants are on Earth, but estimates put the number at about ten billion billion. And sometimes, it can feel like a good proportion of those ants are marching through our homes.

Ants usually come indoors in search of food or nesting habitat. Even small amounts of food, like pet food crumbs, can attract hordes of industrious ants.

Ants are one of Earth’s most successful animals, and comprise more than 13,000 species. They live almost everywhere except Antarctica, the high Arctic and a small number of islands.

Despite ants’ ubiquity, people can still be surprised, or even horrified, to see a line of ants crawling along their kitchen bench. So should you get out the insecticide, or learn to live with them?

What are ants doing in my house?

Ants are part of nature’s cleaning crew: they efficiently find and remove food left around the house. The problem is, sometimes humans don’t want their help.

Ants occasionally come inside in search of water, particularly during dry periods. In this case you may see them in bathrooms or other humid parts of the house.

Heavy rains can also cause ant nests to flood and force them to relocate to nearby buildings, such as your house. 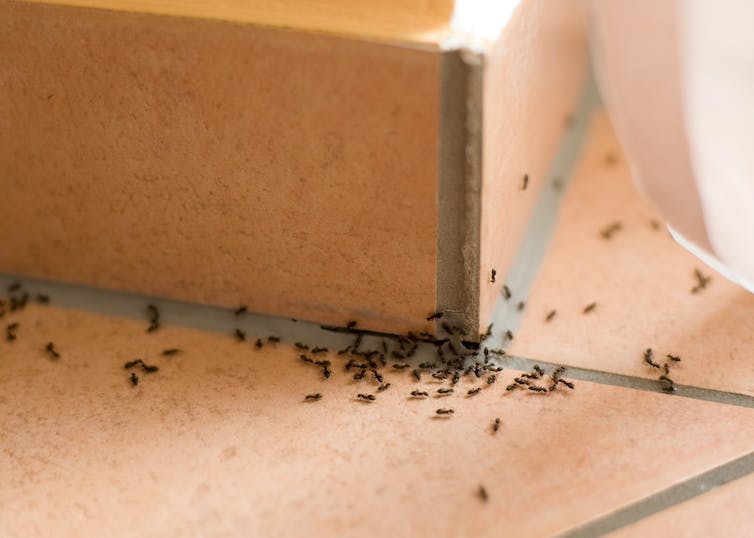 Ants are social animals and live in colonies with hundreds, or even millions, of others. They have tiny brains – in many cases smaller than a grain of sand. So how are they so clever at getting into our homes and finding our food? Because they are masters of cooperation.

Read more: Here's what that house proud mouse was doing – plus five other animals who take cleaning seriously

Consider the way some ants march in a line towards that drop of honey on your kitchen bench. When worker ants of some species find a tasty piece of food, they respond by placing a tiny droplet of pheromone on the ground. They continue to leave a trail of pheromones all the way back to the nest.

Only one ant needs to find the food and lay a trail. Once that happens, hundreds of others can follow the trail to the food source.

How do I get rid of ants?

The first step to dealing with ants in your house is ensuring they don’t have access to food. Seal all food in airtight containers, clean behind the fridge and in the toaster, do not leave pet food out longer than necessary, ensure your bins are tightly sealed, and generally make sure there is no food around to entice ants (I know, easier said than done).

If you’ve seen ants marching in a line, try wiping down the surface with vinegar or bleach to disrupt the chemical trail.

Prevent ants from entering your home in the first place by sealing up cracks and holes in walls. This will also prevent them from nesting inside wall cavities.

If all else fails, insecticidal baits can be used to control ant numbers. But before you take that route, ask yourself whether the ants are actually a problem (more on that later).

Insecticides may harm other insects

If your ant problem has got out of hand, contact a pest control professional rather than attempting to deploy a bug bomb or similar insect spray yourself.

DIY methods rarely work because ants mostly live in protected spaces (such as underground or in walls). You might kill a few worker ants, but probably won’t harm the colony. 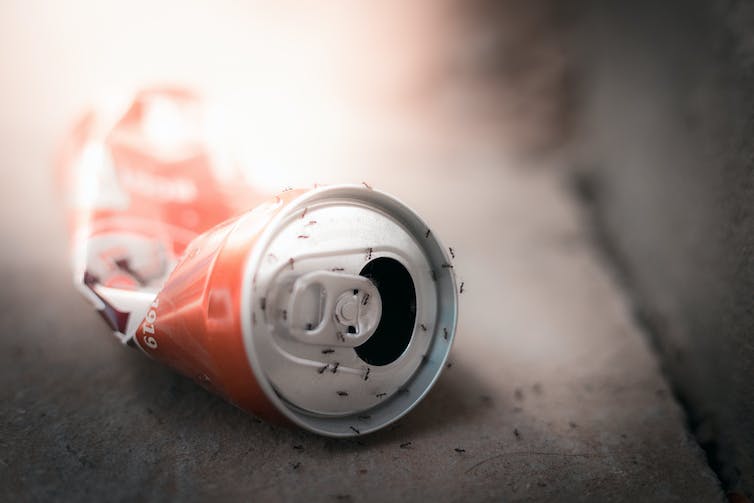 Wiping a surface with vinegar can disrupt the chemical trail ants use to march in a line. Shutterstock

If you (or a professional) do use insecticides, avoid using them outdoors and look for ones specifically designed for ants. Most insecticides are broad spectrum chemicals that can kill other types of insects. This includes insects beneficial in your home and garden, such as ladybirds, mantises and parasitoid wasps.

It may take a while for the ant colony to die, especially if it is large. Some species distribute themselves among several nests which makes them much harder to eradicate.

In most ant species, the queen is the only individual who can produce new workers. So to destroy the colony, you need to kill the queen.

But some species, such as the rock ant (Temnothorax albipennis), have evolved an ingenious way to protect the queen and her larvae from poisoned food.

Read more: These ants have evolved a complex system of battlefield triage and rescue

Some worker ants stay in the colony and receive new food from forager ants – storing the food in their abdomen and regurgitating it when their nestmates are hungry. Since these “storage ants” collect and mix food from many workers, they help ensure that incoming poisons are diluted before they reach the queen. They also act as poison testers: if the food is toxic, they die before they can pass it on to the queen.

Remember that ants can be beneficial predators – I’ve seen ants attack and kill cockroach nymphs. Ants also play an important role in spreading the seeds of native plants, and of removing waste from our environment.

Ants are a normal and important part of our urban ecosystems. So if we want to protect our precious biodiversity, this may mean tolerating our tiny neighbours - even when they seem intent on taking over our kitchen or ruining our picnic.

No one wants ants ruining their food. But if you have a small number of ants wandering around the house, is that really a big deal?