It might surprise you to learn that nuclear bomb tests during the Cold War are now helping conserve whale sharks, the largest living fish.

Growing up to 18 metres – longer than the average bus – whale sharks live in all tropical oceans. In Australia, they are found off tropical coasts in the north, particularly in Western Australia.

Whale sharks face a number of threats. Globally they are listed as endangered, and their numbers continue to decline.

Until recently, key information about the life history of whale sharks was missing, which prevented informed choices about how they were managed. In particular, scientists were not able to accurately assess their age and growth patterns.

Our research, published today in Frontiers in Marine Science, changes that. We examined the skeleton of whale sharks, using carbon from Cold War atomic bomb testing as a “time stamp” to reveal their true age. The findings will help protect these beautiful animals into the future. 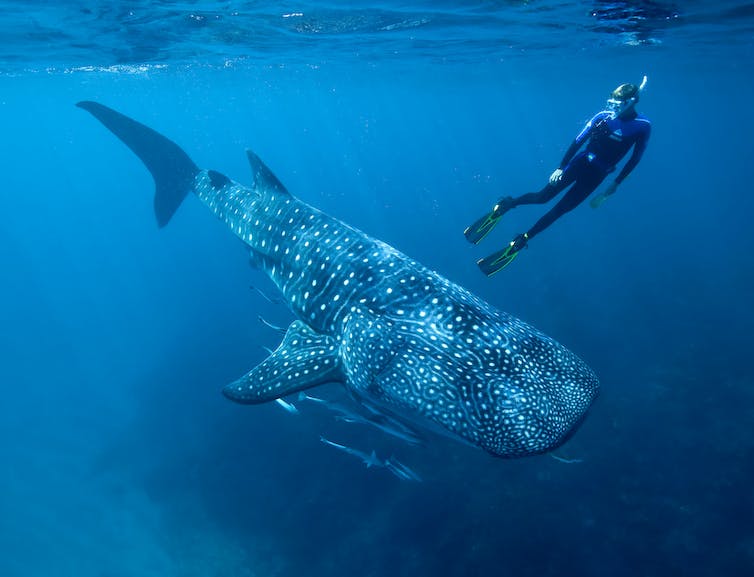 Until now, it’s been difficult to assess the age of whale sharks. Wayne Osborn

Whale sharks are placid “filter feeders”, which basically means they eat by opening their massive mouths and straining small fish and plankton that pass through the gills.

They are covered in a pattern of stripes and spots that provide camouflage as they bask at the surface. Whale sharks’ gentle nature and striking appearance has made them a drawcard for tourists who pay to snorkel or dive with the animals.

Whale shark ecotourism is big business. At Ningaloo Reef off Western Australia, the industry is worth an estimated A$12.5 million per year.

The industry is also valuable for small island nations such as the Maldives and developing countries including the Philippines and Indonesia. It has lifted thousands of villagers from poverty and provided an impetus for governments to protect whale sharks.

But all is not plain sailing for these animals. In some parts of the world they are hunted for their fins, meat, oil and skin. The flesh resembles tofu when cooked, and is a popular menu item in parts of Asia, particularly China.

When shipping lanes are established near whale shark habitat, the animals are frequently struck by vessels and either die or suffer propeller injuries such as fin amputation. Their habit of basking at the surface of the ocean during the day puts whale sharks at particular risk of ship strike.

This combined with other threats – such as warming sea surface temperatures due to climate change – has created an uncertain future for these charismatic and valuable animals. 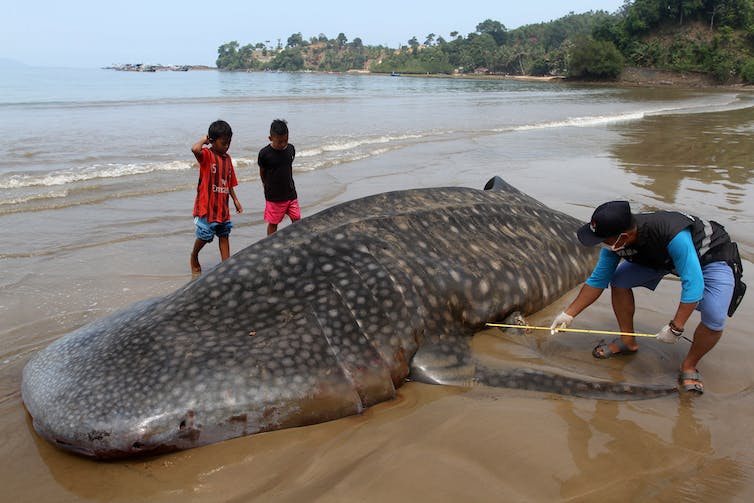 The silver lining on the mushroom cloud

Just how vulnerable whale shark populations are to these threats is not clear. Growth rates of fish species – or how many years they take to reach a certain size - determine their resilience, and how fast populations are likely to recover if severely damaged.

But determining the age of whale sharks has, to date, been very difficult. Their vertebrae feature distinct bands, similar to the rings of a tree trunk, which increase in number as the animal grows older. But the bands could not conclusively be used to determine age because some scientists believed a ring formed every year, but others suggested one formed every six months. 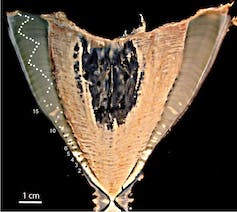 To settle the debate, we turned to the radioactive legacy of the Cold War’s nuclear arms race - specifically, carbon-14.

Carbon-14 is a naturally occurring radioactive element. But in the 1950s and early 1960s, nuclear weapons tests by the US, Soviet Union, Great Britain, France and China released enormous amounts of carbon-14 into the air.

It travelled into the world’s oceans, and into every living organism on the planet – including the skeletons and shells of animals.

We analysed the vertebrae of two whale sharks collected many years ago in Taiwan and Pakistan. By counting back from the peak carbon-14 level, we concluded the rings were formed once per year. This meant that for the first time, the age and growth rate of a whale shark could accurately be determined; a 10-metre shark was 50 years old.

We know whale sharks can grow to almost twice the length of the animals we analysed, and have been estimated to live as long as 100 years. The results of our study makes that prediction now seem more likely. 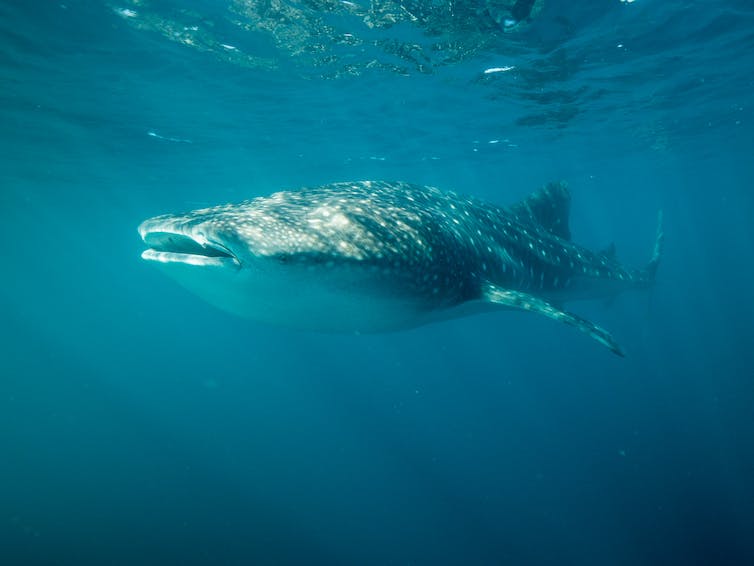 Whale sharks can live as long as 100 years. Wayne Osborn

What does this mean for whale sharks?

Slow-growing species with long lifespans are typically very susceptible to threats such as fishing. This is because it takes many years for animals to reach reproduction age, and the rate at which individuals are replaced is very slow.

Our study explains why fisheries targeting whale sharks almost immediately collapse: the species is not built to cope with the added pressures of human harvests.

Whale sharks populations take a very long time to recover from over-harvesting. Governments and management agencies must work together to ensure this iconic animal persists in tropical oceans - for both the future of the species, and the many communities whose livelihoods depend on whale shark ecotourism.