Since the Gorkha earthquake killed almost 9,000 people in April 2015, Nepal has been on a slow and arduous route to recovery. Nepal’s vibrant cultural heritage of monuments, religious places, crafts, festivals and traditional practices has been key to this process.

Heritage reconstruction in Nepal has been prioritised in the UNESCO World Heritage Site of Kathmandu Valley and received vast amounts of international assistance. But this reconstruction has also become the source of growing tensions between global institutions, national politics and local aspirations.

Bhaktapur city is home to one of seven monument zones of the valley. It has been undertaking a novel form of locally led recovery, focusing on built heritage to restore its tourist potential and – more importantly – rebuild community life and the resilience of residents.

Bhaktapur is 13km from Kathmandu with a population of 82,000. The city has a long history stretching back to the 12th century as a prominent seat of power for the Malla Dynasty.

The central Durbar Square, an ensemble of palaces, temples and rest-houses, showcases centuries of history, architecture and craftsmanship. Declared a World Heritage Site in 1979, Bhaktapur is often referred to as a city of “living heritage”, with over 130 heritage sites and an annual calender of festivals, processions and crafts.

Bhaktapur suffered extensively in the earthquake, with over 300 deaths and 2,000 wounded. Over 30,000 houses and 116 monuments were significantly damaged. 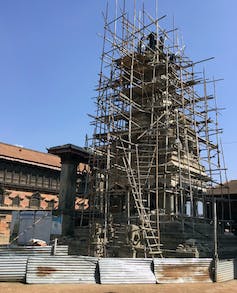 For residents, heritage reconstruction is a prominent, tangible sign of post-earthquake recovery, offering a renewed sense of local pride. Sites being reconstructed are not simply monuments for tourists to visit, but essential places for public life: temples for worship and rest-houses for community gatherings.

The president of one of the local user committees, Ram Hari Kora, tells me why he volunteers for heritage reconstruction: “All these monuments are properties left by our ancestors. They have cultural significance as well.”

Continuing to celebrate festivals has become the city’s way of returning to normalcy. The annual August festival of Gai Jatra commemorates the dead through a week-long series of rituals and processions through the city.

Images of deceased family members are part of the processions, accompanied by riotous and energetic dances, traditional costumes and masks.

In 2015, the festival offered locals the opportunity to share in collective grief.

Five years on, close to 80% of the restoration and reconstruction work in Bhaktapur has been completed. Local consumer committees handle finances and planning of individual projects. Funds are supplemented with donations of cash and building materials from residents, and locals volunteer to work on reconstruction sites themselves.

Bhaktapur resident Deepesh Raj Sharma recalls how, in the aftermath of the earthquake, residents rallied together to catalogue and store important fragments of several temples that had fallen down to ensure their safety.

“Protecting our heritage and the wealth of our ancestors is part of our duty towards the community,” he says.

In stark contrast to its neighbours Kathmandu and Patan, Bhaktapur maintains a high degree of autonomy in reconstruction. Less than 10% of heritage sites in Bhaktapur have been directly assigned to the Department of Archaeology of Nepal. The city famously declined over US$10 million (A$16 million) in foreign funding from the German Development Bank in 2018 over disagreements about the way reconstruction projects would be commissioned and implemented.

Read more: Kathmandu locals are fighting 'injustice' to save their city's heritage, years after deadly earthquake

Several local approaches conflict with international guidelines on heritage protection, which has led to critiques by conservation experts. The use of new materials and techniques and the lack of detailed documentation and research are ongoing concerns.

But most locals I interviewed are satisfied with the steady progress that is visible within the city. Many have a distinct sense of ownership of their city’s heritage recovery.

Literature student Samriddhi Prajapati tells me: “Ongoing reconstruction of heritage makes me proud, because this way we can preserve our culture and encourage tourism side by side.”

Not all heritage, not all people

Unfortunately, not all Bhaktapur’s heritage buildings have received the same care.

While public and community heritage has received sustained attention and funding, many private houses have disappeared into piles of rubble. Houses that survived have been languishing. 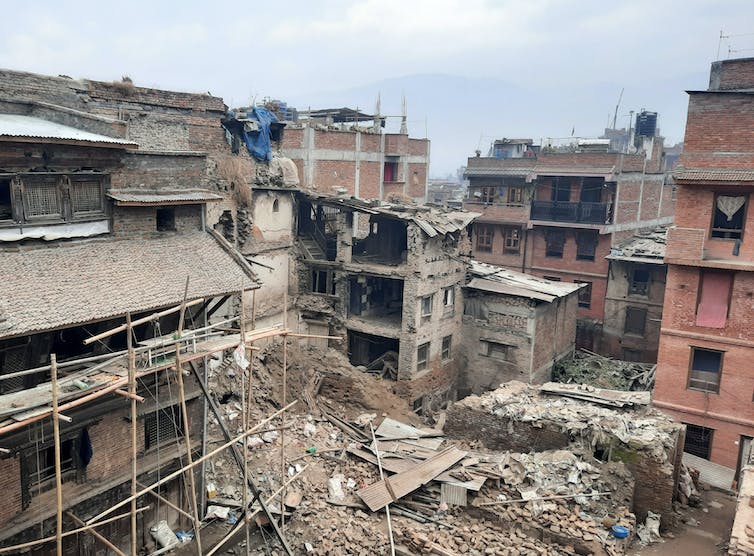 Many houses over 150 years old are still standing in Bhaktapur, while others were destroyed by the earthquake. Newer construction systems and materials replace the old building stock. Vanicka Arora, Author provided

Housing needs to follow strict bylaws to qualify for funding incentives, leading to conflicts slowing down reconstruction. Concerns for safety and efficiency also override heritage, so almost all new houses are built using modern construction materials. The city’s ageing housing stock is being abandoned or replaced.

Heritage is not a priority for all of Bhaktapur’s residents, particularly its poorest and most marginalised communities, which have more immediate concerns about housing, food and employment. For them, recovery is a distant dream and heritage is a luxury.

But Bhaktapur’s heritage recovery process leverages its past for its future, building disaster resilience and fostering social and cultural ties while rebuilding local and national identity.

As tourist guide Sahana Chitrakar tells me: “People can see their reflection in heritage, they can see their parents and grandparents, so they want to keep it for the future”.