What price are you willing to pay for food?

For most of us, that’s a question about money. But what if the cost were actual pain, injury and death? For some seals and dolphins, this a real risk when hunting.

We took a close look at a New Zealand (or long-nosed) fur seal that stranded at Cape Conran in southeastern Australia, and discovered it had numerous severe facial injuries. These wounds were all caused by fish spines, and they show the high price these animals are willing to pay in pursuit of a meal.

When the unfortunate seal was first spotted dead on the beach, it was clear something was amiss: the animal was emaciated, and had a large fish spine stuck in its cheek. 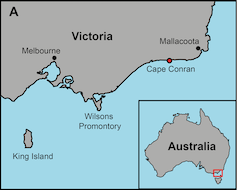 Location where the seal was found in south-eastern Australia. David Hocking

A team of scientists from the Department of Environment, Land, Water and Planning (DELWP), Museums Victoria and Monash University decided to investigate, and took a CT scan of the seal’s head. The results were striking: fish spines had penetrated not just both cheeks, but also the nose and jaw muscles.

On closer examination, we also found ten stab wounds, likely from further fish spines that had been pulled out. The wounds were spread all over the face and throat, and at least some appear to have festered. They may have made feeding difficult, and ultimately may have caused the animal to starve.

These wounds were likely not the result of unprovoked attacks. They were probably inflicted by prey that simply did not want to be eaten. 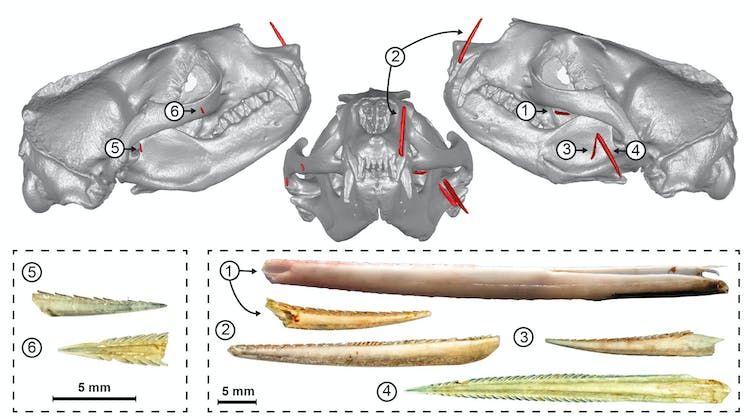 3D computer models of the seal’s skull showing the position of the stingray barbs and ghostshark spines. David Hocking

Many fish species have evolved elaborate defence systems against predators, such as venomous spines that can inflict painful wounds.

Our seal appears to have been done in by two species of cartilaginous fish. One was the elusive Australian ghostshark (also known as elephant fish), a distant relative of true sharks that has a large serrated spine on its back.

The other was a stingaree: a type of small stingray with a venomous tail barb that can be whipped around like a scorpion’s tail. Its sting is normally aimed at would-be predators, but sometimes also catches the feet of unwary humans. 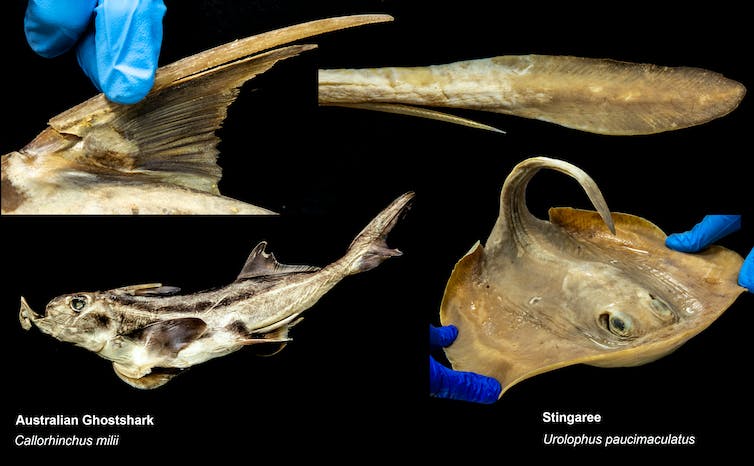 Sharp harpoon-like barb from the tail of a stingaree that was found embedded within the face of an unlucky New Zealand fur seal. David Hocking, CC BY-SA

How to eat a spiky fish

Until recently, most of what we knew about the diet New Zealand fur seals was based on bony remains left in their poo. This technique largely overlooks cartilaginous fish, whose skeletons are made of cartilage instead of bone. As a result, we didn’t realise fur seals target these creatures.

New studies of the DNA of devoured prey in the seals’ scats now suggest they commonly feed on ghostsharks. Stingarees and other rays are less common, but evidently still form part of their diet. So how do the seals handle such dangerous prey on a regular basis?

It all comes down to table manners. Ghostsharks and rays are too large to be swallowed whole, and hence must be broken into smaller chunks first. Fur seals achieve this by violently shaking their prey at the water’s surface, largely because their flippers are no longer capable of grasping and tearing.

Shaking a fish in the right way (for example by gripping it at the soft belly) may allow seals to kill and consume it without getting impaled. Nevertheless, some risk remains, whether because of struggling prey, poor technique, or simply bad luck. The wounds on our seal’s cheeks suggest that it may accidentally have slapped itself with a ghostshark spine while trying to tear it apart. 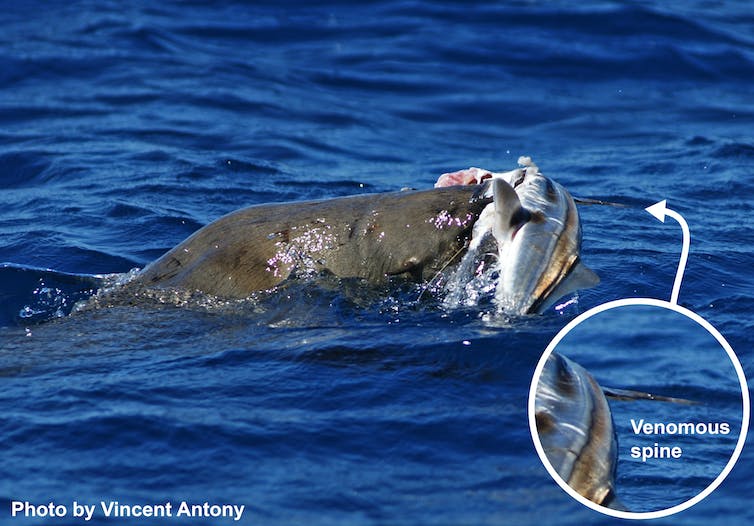 Australian ghostshark being eaten by an Australian fur seal belly first, thus avoiding the sharp spine on its back. Photo by Vincent Antony 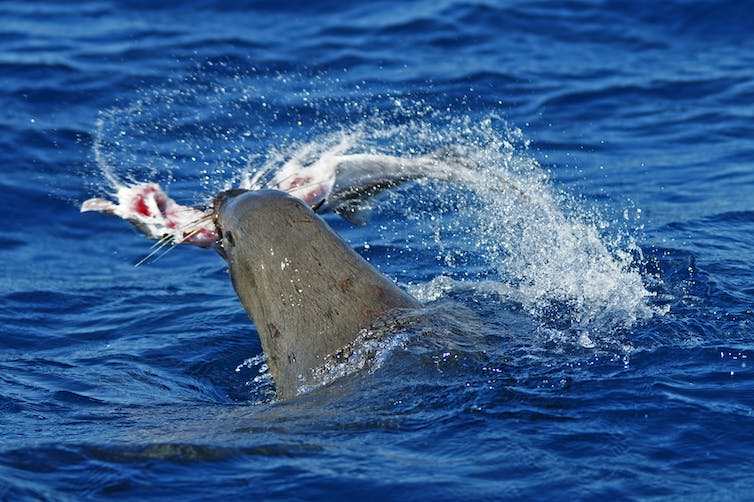 Australian ghostshark being eaten by an Australian fur seal belly first, thus avoiding the sharp spine on its back. Photo by Vincent Antony

One of the challenges we face as scientists is knowing how to interpret isolated observations. Are fish spines a common problem for fur seals, or was our individual just particularly unlucky? We don’t know.

New techniques like analysing DNA from scats means that we are only just beginning to get a better idea of the full range of prey marine mammals target. Likewise, medical imaging techniques such as CT scanning are rarely applied to marine mammal strandings, and injuries like the ones in our seal may often go unnoticed. 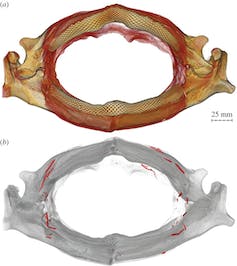 Nevertheless, fish spine injuries have been observed in other ocean predators, including dolphins, killer whales, and rays. One wedgefish described in another recent study had as many as 62 spines embedded in its jaw! Now that we know what to look for, we may finally get a better idea of how common such injuries really are.

For now, this extraordinary example vividly demonstrates the choices and dangers wild animals face as they try to make a living. For our seal, the seafood ultimately won, but we will never know if the fish that killed it got away, or if the wounds they left are evidence of the seal’s last meal.