Woman? All they knew for sure was that they desired her. Désir, a gigantic five-letter word.

So commented American artist Dorothea Tanning recalling her time in the surrealist milieu of New York in the 1940s. 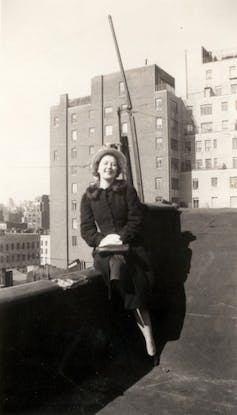 On a New York rooftop in 1938. Dorothea Tanning Estate

She had met German artist Max Ernst one day in 1942 when he came to her Manhattan apartment to look at some paintings for an all-woman show at Peggy Guggenheim’s gallery. He selected the only two completed works she had; they played chess and he never went home.

By the time Max knocked on her door, Tanning had seen the Fantastic Art, Dada and Surrealism exhibition at Museum of Modern Art in 1936 and was already a convert to surrealist imagery. She described it as “the infinitely faceted world I must have been waiting for”.

The fact the imagery of Dali, Man Ray and Duchamp and their ilk emphasised a “male gaze” did not deter her. While the male surrealists of the time objectified the female body and revelled in desire, Tanning’s work was notable for its interest in actual female experience while also exploring the unconscious – our inner most dreams – as well-springs of creativity.

From a place where nothing happened

Tanning was born in 1910 in Galesburg, Illinois, a town in which she declared “nothing ever happened but the wallpaper”. A self-taught creator, she sustained herself as a successful commercial artist while pursuing her own painting.

She was in New York as the surrealists began to arrive, exiled or rescued from a ravaged Europe, and she forged deep friendships with the likes of John Cage, Marcel Duchamp, Joseph Cornell and Lee Miller.

She and Ernst (who’d previously been married to Peggy Guggenheim) married in 1946 in a double ceremony with Man Ray and Juliet P. Browner. The couple moved to France in 1950s after Ernst relinquished his American citizenship in the rigid conservatism and nationalistic Cold War fervour of the McCarthy Era. 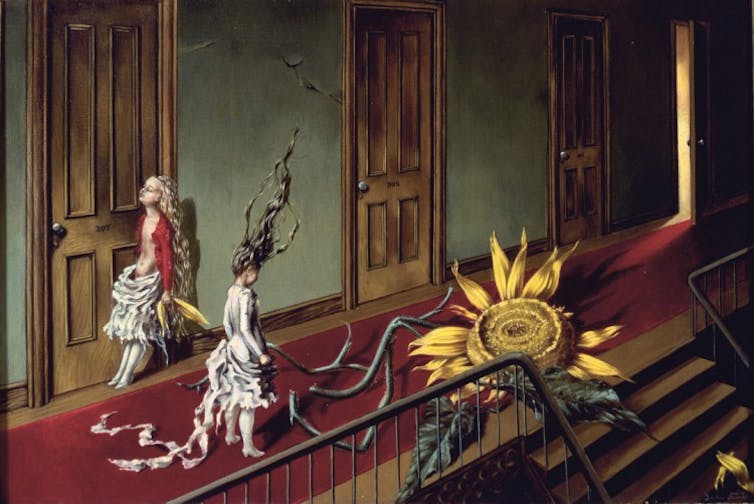 Tanning developed her own visual language to explore her experiences in a world alive with emotional and psychological complexity. She aimed “to capture the moment, to accept it with all its complex identities”. She was interested in the fluid spaces in between realities – places of infinite possibility.

Accordingly, her characters are often caught in states of physical, emotional or psychological transformation. Her work demonstrates a preoccupation with thresholds, liminal and transitional spaces in which fantasy, reality, sensation and imagination converge. Her 1976 work Murmurs illustrates this.

Her repeated motifs of doors, wallpaper and cloth are symbols of these thresholds that create otherworldy spaces. She was interested in how irrational events are folded into mundane, everyday interiors. 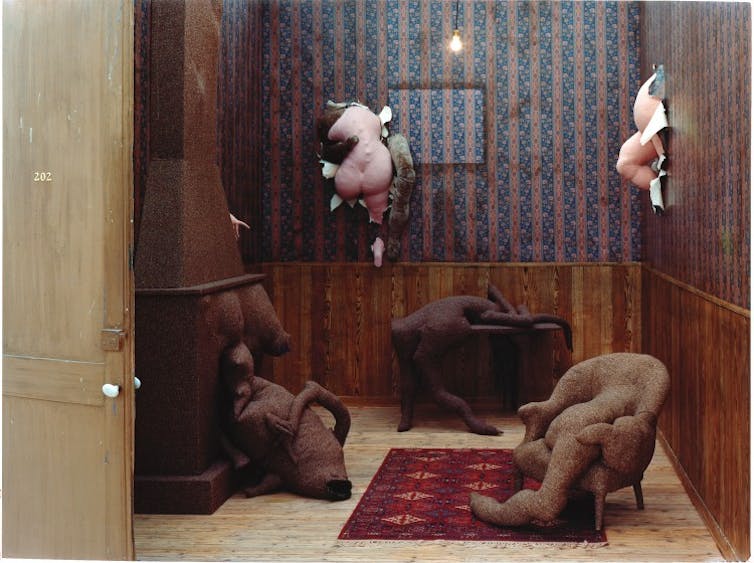 Tanning’s work satellites around the feminine form, its boundaries, movements, abstractions and sensations. She was fascinated with the lived experience of the female body in maternity or when confronted by violence. She depicted childhood and puberty in works like The Guest Room as both desired and dreaded.

Tanning explored relationship dynamics – in families, among strangers, in the bond between human and animals (particularly dogs) – through voluptuous surfaces of paint, cloth or tissue paper that convey a sense of perpetual transformation. In works like Family Portrait (1977) she visibly collapses the boundaries between her figures to engage the imagination of any viewer.

Tanning was the subject of a retrospective at London’s Tate last year.

Tanning returned permanently to New York in 1980 soon after Ernst’s death. While she continued to make visual artwork, she increasingly turned her hand to writing, becoming an accomplished and well-published poet.

She was still producing extraordinary work when I met her in 2000 and began a friendship that lasted until her death in 2012. Her consummate skill as an artist was acknowledged among her peers throughout her life, and her work features in international galleries including Tate, San Francisco and New York Museums of Modern Art and the Pompidou Centre in Paris.

Tanning’s work has recently returned to the spotlight in recognition of its unique contribution to visual art. The first major retrospective of her work in 25 years was held at Museo Nacional Centro de Arte Reina Sofía in Spain and London’s Tate Modern last year. Her work was also included in the 2013 Venice Biennale.

Scholars have also begun paying attention to her work. In November, my monograph Dorothea Tanning: Transformations, the first devoted to her, traced her career’s recurrent themes and preoccupations. As an artist interested in exploring the richness of human experience from a feminine viewpoint, Tanning’s work occupies a singular position in the history of modern art.