The unprecedented halt of sporting competitions globally has been a painful experience for sport fans during the coronavirus shutdown. After all, in recent years, about every second Australian has regularly indulged in sport media content.

Some relief for those needing their sports fix could be coming soon, with the German Bundesliga resuming play this weekend in empty stadiums, and the NRL and AFL planning their returns.

But the shutdown is proving to be more painful for women’s sports, which haven’t received nearly as much attention or media coverage since the pandemic began.

In the absence of live sport, and in an effort to maintain engagement, media outlets have had to be proactive in producing content to replicate the emotion, connection and sense of community that live sport delivers.

The answer for many has been to replay vintage matches, tournaments and games, as well as bringing forward the release of sport documentaries like The Last Dance, about Michael Jordan’s Chicago Bulls.

Traditionally, curated lists of “best matches” or “top 10 sporting moments” make for attractive, fun and useful content. But while these lists are filling the void caused by the pandemic, there is a downside: women’s sports are being sidelined.

On the first weekend after social distancing measures were enacted in March, a prominent article in the Sunday Age featured eight sport journalists (notably all men) providing more than 30 recommendations of their most memorable sporting movies, books and matches to revisit.

Only one recommendation was for women’s sport content – the baseball film A League of Their Own.

The double-page article also pointed readers to what they claimed was “excellent sports writing, films and documentaries to … satisfy any sporting appetite”, featuring 68 names, of which only two were women.

Read more: As sport resumes after lockdown, it's time to level the playing field for women and girls

This wasn’t the only “best of” list to largely sideline women. Others were published by the Guardian and Telegraph in the UK; CBS Sports and USA Today in the US; and the German LAOLA1.

Why aren’t movies like the Battle of the Sexes, about Billie Jean King’s fight for equality for women’s tennis, or the gripping 1999 Women’s FIFA final penalty shootout between China and the US in front of a crowd of more than 90,000 making such lists? You have to go to smaller outlets to find them.

From a media analysis perspective, this disparity reveals two things:

This recent focus on male-dominated content is all the more surprising considering how quickly women’s sports have grown recently. More women than men now participate in sport and physical activity in Australia.

More than half of all Australians also now watch broadcasts of or attend live women’s sporting events, and almost every second Australian says they would watch more women’s sport if it was available.

Yet, even before the pandemic, mainstream media coverage of women’s sport was far from being a level playing field.

Globally, UNESCO found in 2018 that only 4% of sport media content was dedicated to women’s sport. In Australia, we’ve gone backwards: just 7% of sport programming featured women in 2015, down from 11% a decade earlier.

In collaboration with the new women in sport collective, Siren Sport, we have been collecting our own data on the online coverage of women’s sport in mainstream Australian media outlets.

Prior to the shutdown, the numbers were already low. Analysing coverage on Sundays, Siren Sport found the peak came on International Women’s Day (March 8) when the women’s T20 World Cup final was played between Australia and India in front of a record-breaking crowd at the MCG. Nearly a third (31.5%) of media coverage that day was devoted to women’s sports. 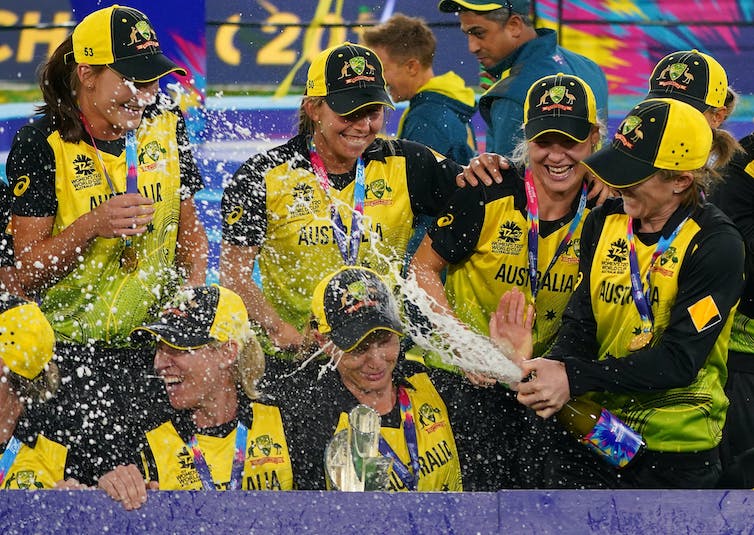 The following Sunday, women’s sport coverage dropped back down to 11.6%.

In the past four weeks, this percentage has dropped even further, with just 7.7% of the online content across 20 Australian publications devoted to women’s sport. 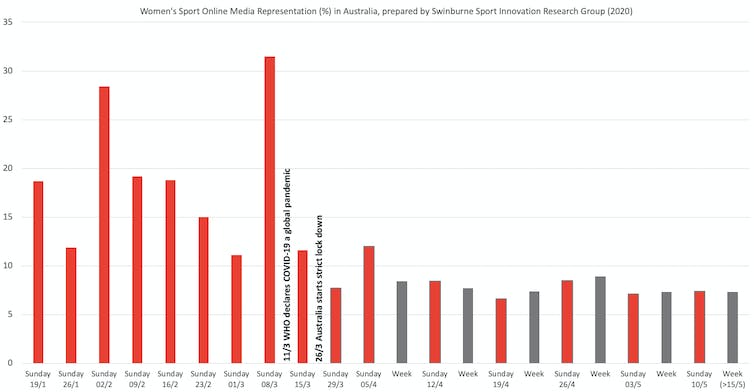 Women’s leagues will struggle to restart, too

Last year, Victoria University’s Fiona McLachlan analysed the increasing interest, or what she called “booms”, in women’s sport in the Australian media over a century.

She observed that while we occasionally have “celebratory” moments related to women’s progress in sport, history tells us these narratives routinely fade, or “bust”.

While disheartening, our research supports the notion that women’s sport only occasionally pokes through the heavy layer of male sport coverage, such as when there are stellar performances by female athletes. As journalist Richard Hinds put it,

those weeks when a Karrie Webb major, Australian team netball triumph or some other stupendous international achievement caused a blip on the graph.

Our data suggest this is true even when there are no men’s sports for women’s sports to compete against.

Yes, the media does need to focus on questions around restarting the men’s NRL and AFL seasons, but why aren’t the same conversations being had about Suncorp Super Netball (which is also looking to restart in June) and the NRLW (uncertain to return at all)?

Read more: The gender pay gap for the FIFA World Cup is US$370 million. It’s time for equity

It’s vital to recognise the unique challenges facing women’s sport after the pandemic, as many professional players were struggling to make a living even before competition came to a halt.

The media need to tell these stories – not provide us with another list of “best of” male sporting achievements.