The fossil fuel lobby, led by the Minerals Council of Australia, seem pretty happy with the current system of environment laws. In a submission to a review of the Environment Protection and Biodiversity Conservation (EPBC) Act, it “broadly” supports the existing laws and does not want them replaced.

True, the group says the laws impose unnecessary burdens on industry that hinder post-pandemic economic recovery. It wants delays and duplication in environmental regulation reduced to provide consistency and certainty.

Read more: Our nature laws are being overhauled. Here are 7 things we must fix

But for the fossil fuel industry to broadly back the current regime of environmental protection is remarkable. It suggests deep problems with the current laws, which have allowed decision-making driven by politics, rather than independent science.

So let’s look at the resources industry’s stance on environment laws, and what it tells us. 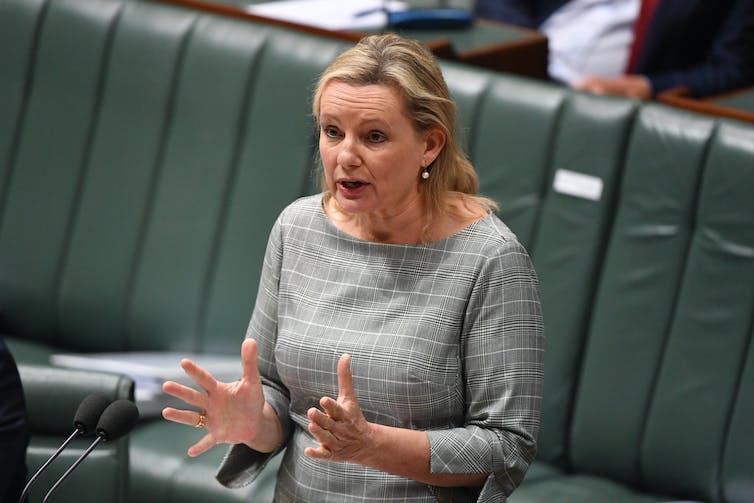 The Minerals Council’s submission calls for “eliminating or reducing duplication” of federal and state laws.

The fossil fuel lobby has long railed against environmental law - the EPBC Act in particular - disparaging it as “green tape” that it claims slows projects unnecessarily and costs the industry money.

On this, the federal government and the mining industry are singing from the same songbook. Announcing the review of the laws last year, the government flagged changes that it claimed would speed up approvals and reduce costs to industry.

Previous governments have tried to reduce duplication of environmental laws. In 2013 the Abbott government proposed a “one-stop shop” in which it claimed projects would be considered under a single environmental assessment and approval process, rather than scrutinised separately by state and federal authorities.

That proposal hit many political and other hurdles and was never enacted. But it appears to remain on the federal government’s policy agenda.

It’s true the federal EPBC Act often duplicates state approvals for mining and other activities. But it still provides a safety net that in theory allows the federal government to stop damaging projects approved by state governments.

The Commonwealth rarely uses this power, but has done so in the past. In the most famous example, the Labor party led by Bob Hawke won the federal election in 1983 and stopped the Tasmanian Liberal government led by Robin Gray building a major hydroelectric dam on the Gordon River below its junction with the Franklin River.

The High Court’s decision in that dispute laid the foundation for the EPBC Act, which was enacted in 1999. 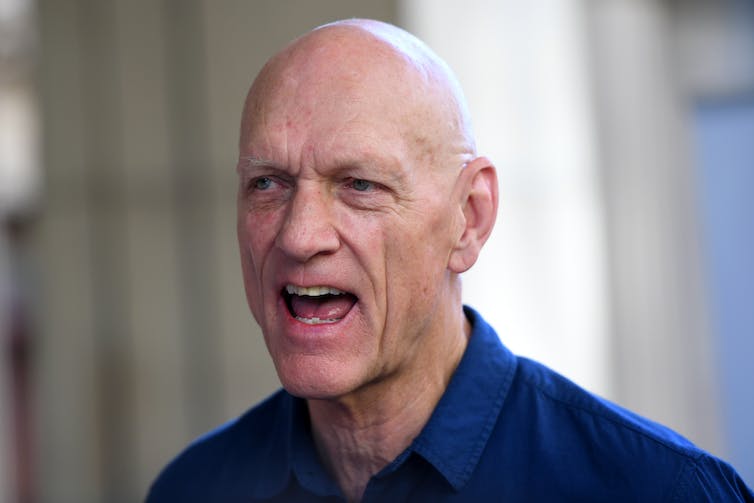 In 2009 Peter Garrett, Labor’s then-federal environment minister, refused the Queensland Labor government’s proposed Traveston Crossing Dam on the Mary River under the EPBC Act due to an unacceptable impact on threatened species.

The Conversation put these arguments to the Minerals Council of Australia, and CEO Tania Constable said:

The MCA’s submission states that Australia’s world-leading minerals sector is committed to the protection of our unique environment, including upholding leading practice environmental protection based on sound science and robust risk-based approaches.

Reforms to the operation of the EPBC Act are needed to address unnecessary duplication and complexity, providing greater certainty for businesses and the community while achieving sound environmental outcomes.

But don’t change the current system much

Generally, the Minerals Council and other resources groups aren’t lobbying for the current system to be changed too much.

The groups support the federal environment minister retaining the role of decision maker under the law. This isn’t surprising, given a succession of ministers has, for the past 20 years, given almost unwavering approval to resource projects.

For example, in 2019 the then-minister Melissa Price approved the Adani coal mine’s groundwater management plan, despite major shortcomings and gaps in knowledge and data about its impacts.

Read more: Australia listened to the science on coronavirus. Imagine if we did the same for coal mining

Independent scientific advice against the mine over the last ten years was sidelined in the minister’s final decision.

Countless more examples demonstrate how the current system works in the favour of mining interests – even when the industry itself claims otherwise.

The Minerals Council submission refers to an unnamed “Queensland open-cut coal expansion project” to argue against excessive duplication of federal and state processes around water use.

I believe this is a reference to the New Acland Coal Mine Stage 3 expansion project. I have acted since 2016 as a barrister for a local landholder group in litigation against that project.

When approached by The Conversation, the Minerals Council did not confirm it was referring to the New Acland project. Tania Constable said:

The case studies were submitted from a range of companies, and are representative of the regulatory inefficiency and uncertainty which deters investment and increases costs while greatly limiting job opportunities and economic benefits for regional communities from mining.

The New Acland mine expansion is on prime agricultural land on the Darling Downs, Queensland’s southern food bowl. Nearby farmers strongly opposed the project over fears of damage to groundwater, the creation of noise and dust, and climate change impacts.

But the Minerals Council fails to mention that since 2016, the mine has been building a massive new pit covering 150 hectares. 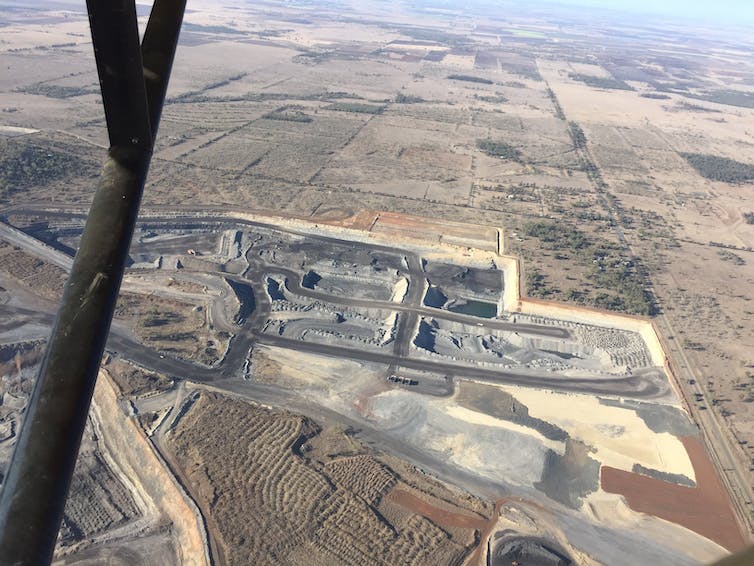 West Pit at the New Acland Coal Mine sprawling amid prime agricultural land in 2018. The right half of this pit is outside the area approved for mining under the EPBC Act in 2017 but no action has been taken by the Commonwealth to stop it. Oakey Coal Action Alliance Inc, Author provided

When mining of this pit began, the mine’s expansion was still being assessed under state and federal laws. Half of the pit was subsequently approved under the EPBC Act in 2017.

But the Queensland environment department never stopped the work, despite the Land Court of Queensland in 2018 alerting it to the powers it had to act.

Based on my own research using satellite imagery and comparing the publicly available application documents, mining of West Pit started while Stage 3 of the mine was still being assessed under the EPBC Act. And after approval was given, mining was conducted outside the approved footprint. 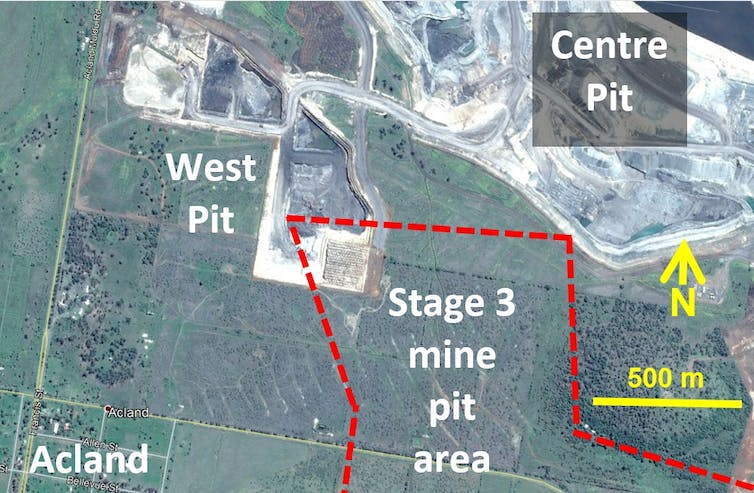 The extent of West Pit on September 30, 2016 and relevant boundaries of the New Acland Coal Mine Stage 3 expansion, then being assessed under the EPBC Act. At this time, West Pit had extended into the project area still being assessed. Stage 3 was approved in early 2017, and since then West Pit has continued south, outside the area applied for or approved under the EPBC Act. Adapted from GoogleEarth by author.

Despite these apparent breaches, the federal environment department has taken no enforcement action.

The Conversation contacted New Hope Group, the company that owns New Acland mine, for comment, and they refuted this assertion. Chief Operating Officer Andrew Boyd said:

New Acland Coal had and still has all necessary approvals relating to the development of the pit Dr McGrath refers to. It is also not correct to say that the Land Court alerted the Department of its powers to act with regards to this pit.

The Department is obviously aware of its enforcement powers and was aware of the development of the pit well before 2018. Further, the Land Court in 2018 rejected Dr McGrath’s arguments and accepted New Acland Coal’s position that any issues relating to the lawfulness of the pit were not within the jurisdiction of the Land Court on the rehearing in 2018.

Accordingly, the lawfulness of the pit was irrelevant to the 2018 Land Court hearing.

Dr McGrath also fails to mention that his client had originally accepted in the original Land Court hearing (2015-2017) that the development of the pit was lawful only to completely change its position in the 2018.

State and federal environmental laws work in favour of the fossil fuel industry in other ways. “Regulatory capture” occurs when government regulators essentially stop enforcing the law against industries they are supposed to regulate.

This can occur for many reasons, including agency survival and to avoid confrontation with powerful political groups such as farmers or the mining sector.

In one apparent example of this, the federal environment department decided in 2019 not to recommend two critically endangered Murray-Darling wetlands for protection under the EPBC Act because the minister was unlikely to support the listings following a campaign against them by the National Irrigators Council.

Holes in our green safety net

Recent ecological disasters are proof our laws are failing us catastrophically. And they make the mining industry’s calls to speed-up project approvals particularly audacious.

We need look only to repeated, mass coral bleaching as the Great Barrier Reef collapses in front of us, or a catastrophic summer of bushfires.

Both tragedies are driven by climate change, caused by burning fossil fuels. It’s clear Australia should be looking to fix the glaring holes in our green safety net, not widen them.

Authors: Chris McGrath, Associate Professor in Environmental and Planning Regulation and Policy, The University of Queensland