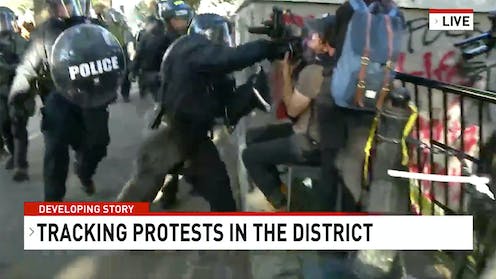 Here is a line from the latest safety advisory for reporters issued by the US-based Committee for the Protection of Journalists (CPJ):

Taking into account the increased levels of violence and tactics used by both police and protesters, ballistic glasses, helmets, and stab vests should be worn. If there is a threat of live ammunition being used, then body armour should be considered.

It is the kind of advice I used to be given before going on assignment to places like Baghdad, Kabul or Mogadishu. But the CPJ is aiming its latest note at US-based reporters more used to covering city hall than documenting running battles between police and demonstrators. It is deeply troubling that an organisation usually advocating for reporters in violent autocratic regimes decides it now has to support those in its own backyard.

One organisation, Bellingcat, has been tracking assaults on journalists since the riots broke out over the death of George Floyd in Minneapolis last week. In the first four days of protests, its chief investigator counted more than 100 incidents. (The CPJ counts closer to 200.)

The 101st involved an Australian news crew from Channel Seven. They were beaten while filming outside the White House, as riot police used tear gas and batons to clear the peaceful protesters so President Donald Trump could walk across the street and hold a Bible in front of St John’s Church. (In a speech moments before, Trump had – without irony – declared, “I am your president of law and order”, and “an ally of all peaceful protesters”.)

The startling number of attacks on journalists does not appear to be an accident. Inevitably, anyone reporting in violent places risks being caught in crossfire. But the numbers suggest something more troubling.

although in some incidents it is possible the journalists were hit or affected accidentally, in the majority of the cases we have recorded the journalists are clearly identifiable as press, and it is clear that they are being deliberately targeted.

The police actions against journalists might seem futile in our social media age when everyone with a mobile phone has the power to act as a reporter, but that doesn’t stop individual cops from lashing out at those they see as actively monitoring them.

There does not appear to be a coordinated strategy. In the United States, policing is generally a state and city affair, so collusion seems unlikely. The CPJ’s Courtney Radsh said the organisation’s experience of tracking violence towards journalists in some of the world’s most hostile regimes shows that the police step up their attacks when they believe they can get away with it.

In the US, the president himself has frequently derided journalists as “the enemy of the people”, who peddle “fake news”, and on Sunday he issued a tweet describing them as “truly bad people with a sick agenda”.

There is no doubt some journalists have behaved unethically or been loose with the facts, and the news business more broadly has not always covered itself in glory.

But as imperfect as it may be, it remains a vital part of the way a free and open democracy works. It acts as a watchdog on behalf of voters, monitoring the behaviour of institutions like the police and government who are supposed to be acting in the interests of the public.

In so many cases in the protests, journalists have clearly identified themselves verbally, with accreditation, with vests labelled “press”, carrying professional-standard cameras, and by their actions, observing rather than participating in the protests. That observation is rarely comfortable for those in authority, but it is a necessary part of the system.

As a recovering journalist and press freedom advocate, I am of course concerned about assaults of my colleagues. But to be clear, this is not about them. What we are seeing in the United States is an attempt to make the public blind to heavy-handed police tactics.

Read more: 'I can't breathe!' Australia must look in the mirror to see our own deaths in custody

The founding fathers of the United States understood that when they wrote the First Amendment into its Constitution, guaranteeing “congress shall pass no law […] abridging the freedom of speech, or of the press”. (The First Amendment also guarantees freedom of religion, the right of the people peaceably to assemble, and to petition the government for a redress of grievances.) Attack the press, and you attack the very system that has made places like the US and Australia among the safest and most prosperous in the world.

The reason autocrats in Turkey, the Philippines and Egypt throw journalists in prison with such enthusiasm is because they know a free media empowers the public, and threatens their survival.

If Trump is the patriot he claims to be, he will honour the Constitution and defend the press rather than accuse reporters of “doing everything within their power to foment hatred and anarchy”.