One of New Zealand Prime Minister Jacinda Ardern’s favourite exhortations is that we all “be kind” to one another. It’s part of the reason she and her government have won admiration around the world for their handling of the COVID-19 pandemic.

Their latest income support program, however, has led many to question why that kindness is not extended to the country’s 300,000-plus pre-COVID welfare beneficiaries. These New Zealanders have fared worse under New Zealand’s centre-left coalition than their Australian counterparts have under Scott Morrison’s centre-right government.

The COVID-19 Income Relief Payment announced last Friday is an after-tax payment of NZ$490 a week for a maximum of 12 weeks. It applies only to those who lose their full-time jobs due to the pandemic (the part-time rate is $250 a week).

The temporary scheme applies to job losses between March 1 and October 30 and replaces any other welfare payment a person may have been entitled to. Unlike other benefits, entitlement is individually targeted: you can receive the full payment unless your partner’s gross income exceeds $2,000 a week, in which case nothing is paid.

The new benefit can be viewed as a state-funded pandemic redundancy package. The rates have been deliberately set close to the 12-week wage subsidy, which has supported 1.64 million jobs since March 17.

Workers who lose their jobs as the wage subsidy becomes more targeted, or if their employers close or downsize, will in effect have an extra 12 weeks’ support at the same rate. 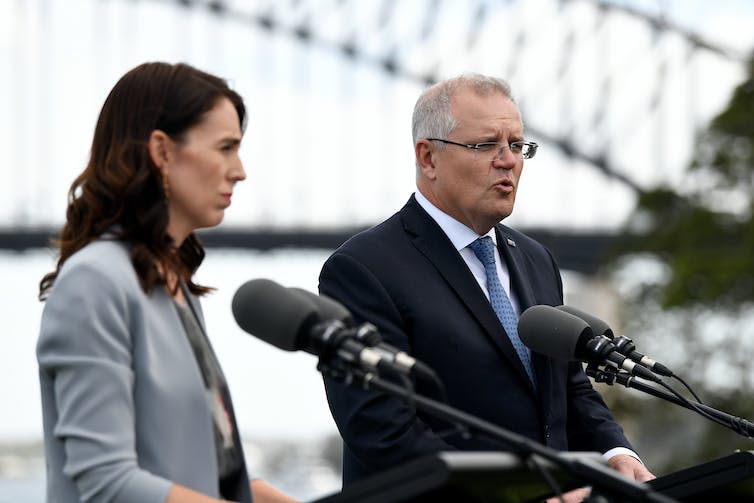 Jacinda Ardern and Scott Morrison: centre-left versus centre-right, but who is really right? Bianca de Marchi/AAP

Less positively – and controversially – the payment creates a massive inequity between those who qualify and those who must rely on standard welfare benefits and welfare eligibility rules.

Read more: A four-day working week could be the shot in the arm post-coronavirus tourism needs

The single adult benefit is $251 a week. A couple with children gets up to $428, compared to $960 a week if they both receive the COVID-19 payment. As some critics have put it, New Zealand now has two classes of unemployed.

The new payment also highlights the similarities and differences between the New Zealand and Australian income support responses to the pandemic.

Both countries focused first on short-term employment protection. New Zealand’s wage subsidy scheme was available to firms that had lost 30% of their revenue due to COVID-19, providing support for 12 weeks at about 50% of the median wage. When it runs out in June a more targeted scheme will be available for eight more weeks.

Australia’s JobKeeper program pays roughly 70% of the median wage for a maximum of six months.

Those already on welfare benefits when the pandemic struck, however, have been treated quite differently. In the first round of responses, the Ardern government increased core benefit rates by $25 a week. This was a flat-rate, permanent increase of between 6% and 11%, depending on benefit category and family circumstances.

The Winter Energy Payment allowance was also doubled between May and October, giving an extra $20.45 a week for a single person and $31.82 for a couple or family with children. 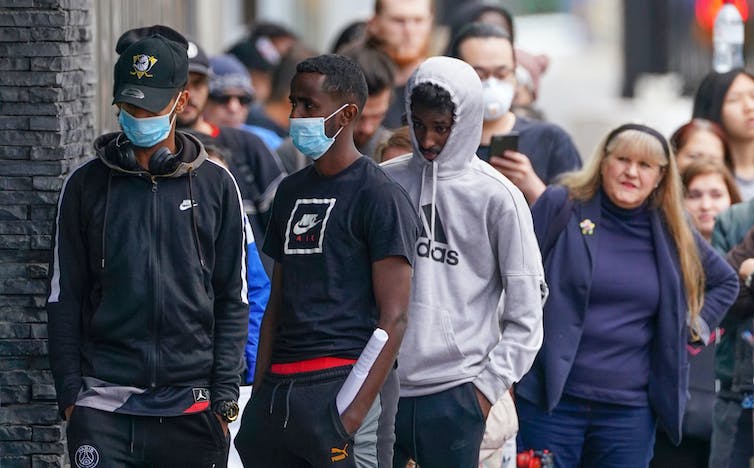 The queue outside a Centrelink office in Melbourne in the wake of business closures due to the COVID-19 pandemic. Scott Barbour/AAP

By comparison, the Morrison government introduced the temporary Coronavirus Supplement, an additional payment of A$225 a week to all existing and new beneficiaries. It applies for six months from late April.

The supplement roughly doubles the JobSeeker rate and is in addition to the two lump-sum A$750 stimulus payments to all income support recipients and concession card holders.

Read more: Self-employed Australians' hours have fallen 32% since coronavirus hit – double the impact on all employees

One could argue in favour of New Zealand’s Income Relief Payment as a somewhat oddly designed social insurance program. Such two-tier, time-limited schemes are, after all, the norm in Europe. But that works if – and only if – the bottom tier provides an adequate minimum standard of living.

That is not the case in New Zealand. Numerous studies, including most recently the government’s own Welfare Expert Advisory Group’s 2019 report, have shown New Zealand’s welfare system is well short of adequate.

The government knows benefits are too low

The minister of social development and other ministers have repeatedly acknowledged this. Analysis by the Child Poverty Action Group shows that, taking the COVID response and earlier government measures into account, working-age beneficiary families’ incomes (after housing costs) are still below the poverty line. This is based on one of the government’s own child poverty indicators – “50% of median equivalised income”, or 50% of the median income after taking account of family size.

This analysis showed support for beneficiaries provides between 29% and 46% of median equivalised income, depending on family type and circumstances. The extra income needed to reach that poverty threshold ranges from $45 a week to $195 a week. 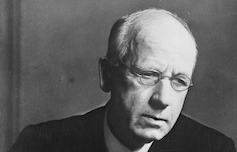 Presenting his “rebuilding together” budget in May, Finance Minister Grant Robertson referred to New Zealand’s first Labour government, which established what was then a world-leading welfare state after the depression of the 1930s. He also made mention of Peter Fraser, the great Labour prime minister who was a central architect of that welfare state and who led New Zealand through the second world war and its aftermath.

What those early reformers would make of their successors is hard to say. But perhaps it wasn’t an earthquake we felt last week while Jacinda Ardern was being interviewed live on TV. Perhaps it was Peter Fraser rolling in his grave.