Chronicling four generations of two families, Felicity Volk’s Desire Lines is set against landmarks of 20th century Australian history, encompassing a geographical span that begins in the Arctic Circle and ends in the Blue Mountains of New South Wales.

Desire Lines is a richly textured celebration of Australia – its landscape, sights, sounds, seasons – while holding in close focus the inner lives of its characters. It is epic in scale, but also an unfolding love story that keeps the reader guessing until the very end. 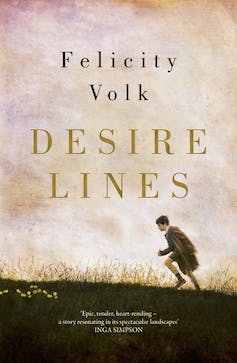 Paddy O'Connor’s trajectory is set by the flip of his gambler father’s “lucky coin” abandoning him (rather than his infant brother) to the systematic cruelties of a London orphanage, and then the hard labour of a farm school far west of Sydney. This spinning coin makes a recurrent trope for decision-making. The inability to decide; the urgencies and waylaying of desire. Desire lines are the paths formed not by designers, but by human feet: the paths of dirt traced into grass as people walk the route they desire, not the route of the path laid out for them. As Paddy, now a successful architect, reflects: … when deciding where to put footpaths around an edifice, a pragmatic architect would plant grass and watch for where the trampled tracks appeared. A pragmatic architect would pave those. Evie’s first meeting with Paddy at her grandparents’ market stall initiates love scenes of unusual tenderness and physical immediacy, overseen by a writer whose nuanced style moves with ease between the lyrically descriptive and the gently ironic. Building and planting and travelling bring the parallel storylines of Paddy and Evie into convergence, setting up their rhythm of meeting and parting and meeting again. Through the eyes of babes Paddy and Evie’s inner lives are finely delineated from earliest childhood, to sexual awakening, to “the sweetness of rapprochement” in old age. Volk acutely observes seven-year-old Paddy’s suffering in the face of his father’s violent abuse of his mother. In the agony of separation and loss he continues to write to Mammy, who “comes to him in dream, her face sharp and familiar”. He is always imagining their reunion. But before long, her sparse replies cease. The bond Paddy forged with his friends from the orphanage, Rusty and Fionnoula, is shockingly broken when he discovers their dead bodies in a farm shed, covered by brown hessian: … guttural noises spilled from his mouth. He was a stranger to his ears. Seeing without fully understanding their grooming and sadistic punishments, he blames himself for not preventing their suicide pact: It would walk beside him and be buried with him, preparing the way before him, so that he would fall into its abyss over and over again with every step that he took. The reader understands Paddy’s failures of courage. Evie will find impossible to forgive him. As a child, in the Edenic space of a lavender maze, Evie becomes aware of a man watching and grunting in an activity that threatens her: with a dread she didn’t know but seemed to have known for ever […] a truth so ugly it may as well have been a lie; best not to give words to it. Rescued by a kindly Aboriginal gardener and presented with one of his yam daisies, she is is confirmed in her life’s work as a conservator of botanical species. The high-point of Evie’s work as a conservationist comes in her depositing Australian seeds in the Global Seed Vault in Norway. Invested in her seeds is hope for the survival of the planet and its ecology; hopes for people and what they hold dear. Living hope Volk’s novel asks: to what extent are our lives laid out for us by the determinations of heredity and environment? What degrees of freedom can we claim? And how can the integrity of the self be reconciled with the needs and rights of others? “Are you still a liar?” Evie fires off in a text message to her estranged lover as the novel’s first sentence. She has learnt lying is endemic in the adult world, and the nation’s history. Being true to her love for Paddy, she is forced to lose custody of her children. He maintains the lie of a happy and faithful marriage to Ann; his children enjoy the stability and security he was denied. Eventually, Evie realises she has reached the end of her patience. “Are you still a liar?” she keeps sending on their anniversaries across years and miles: a question that keeps hope alive by its very constancy. Hope that by coincidence, determination and vulnerability, desire will draw them together at last. Desire Lines is out now through Hachette