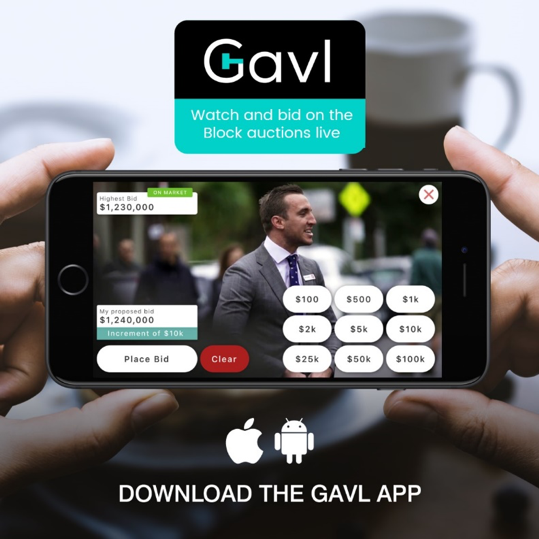 On November 9th, Gavl is partnering with Channel 9’s ‘The Block’ to give prospective buyers the opportunity to watch and bid in real time on 'The Block' auctions via the Gavl app. With a larger buying pool, including those who are unable to physically attend the auctions and those preferring to keep their anonymity, now able to use Gavl this year's contestants have an added edge in selling their homes on the most watched auction on television.

Gavl is a tech platform that allows buyers to watch auctions live, browse listings and shortlist properties from the convenience of their phone. Custom-built for the real estate market, Gavl provides vendors with newfound confidence and assurance in knowing that prospective buyers are able to watch their auction in real time from anywhere in the world. The app is entirely free to use and also provides researching buyers and sellers with the unique market insights into auctions that come from having attended over 30,000 auctions.

“We are so excited to be partnering with the Block” says Gavl CEO Joel Smith “It will be the perfect opportunity to showcase some of the most talked about properties in Melbourne right now to a global audience.”

The St Kilda properties boast four bedrooms each with indulgent floor to ceiling windows and ensuites, spacious private courtyards and self-contained studios. There has been much anticipation and hype around the auctions, located only a stone’s throw away from the iconic St Kilda foreshore.

Last year, WILSON Port Phillip used Gavl to assist in broadening the buyer pool for one of the properties at the Gatwick. This year, Gavl will be used to aid in expanding the potential market for all five of the Grey street properties, opening up an entire world of opportunity.

“What is really exciting about the opportunity Gavl presents, is that It opens up an entirely new audience of buyers” says Graeme Wilson from WILSON Port Phillip “not everyone can be there in person and Gavl allows them to bid from home, live”.

The Blocks very own Greville Pabst, who acts as a Buyers Advocate bought four out of five apartments last season will be exclusively using Gavl for his clients. This then provides an advantage for Greville to tap into a service that the other advocates don’t have access to.

“Gavl allows my clients to be engaged in The Block auctions whilst protecting their identities” says Greville Pabst “Some can’t physically be able to attend auction day, but can still be involved in the experience and not held back for geographical reasons”

The Block finale will air on November 10th, with Gavl being used front and centre during the auction to facilitate a new audience of potential buyers.

For more information and to sign up to Gavl please visit: https://www.gavl.com/

Founded in 2015, Gavl is the innovation by Joel Smith, Leith Donaldson and Michael Artup, who saw a gap in the real estate market for live-streamed auctions that facilitated participation from buyers around the globe. Gavl livestreams auctions in absolute real-time to potential buyers around the globe. The app then allows buyers to browse listings, shortlist properties and watch auctions all from the palm of your hand. With more bidders watching, vendors can be confident in the final auction outcome.