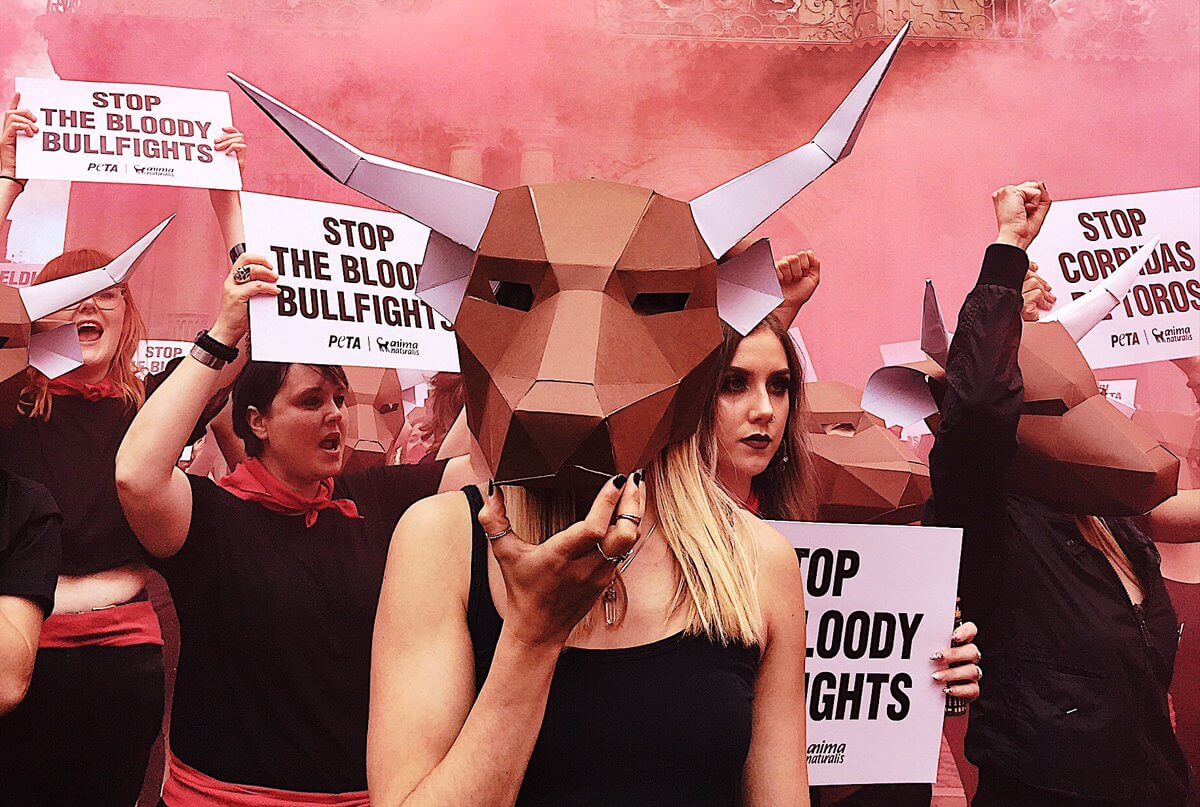 Sydney – Today, more than 100 supporters of PETA UK and Spanish animal-protection group AnimaNaturalis marched to the beat of drums towards the Plaza Consistorial in Pamplona, Spain. Holding signs proclaiming, "Stop the Bloody Bullfights," they staged a high-octane protest of the San Fermín festival's hideously cruel Running of the Bulls event. The protesters – half of whom were "runners" and half of whom were "bulls" – shot blood-red flares into the sky to call for an end to the city's yearly torment and killing of bulls. "More Australians and New Zealanders than Pamplona locals take part in the Running of the Bulls- all seemingly unaware that every single one of the terrified animals they chase through the cobbled streets will be dead a few hours later after being repeatedly stabbed in a bullfight," says PETA spokesperson Emily Rice. "Eighty per cent of Spanish people are demanding an end to this archaic, murderous spectacle, but the bullfighting industry is kept on its last legs in part because of Australian tourist money."

PETA – whose motto reads, in part, that "animals are not ours to use for entertainment" – notes that more than 100 Spanish towns and cities have banned bullfighting. But in Pamplona, bulls are tormented with electric prods and sharp sticks before slipping and sliding along the narrow streets on their way to a violent death in the bullring. Once there, as many as eight men taunt, beat, and jab each bull with daggers and harpoon-like banderillas until he becomes weakened from blood loss. Then, the matador stabs the exhausted animal with a sword and an executioner cuts his spinal cord. Many bulls are paralysed but still conscious as they're chained and dragged out of the arena.

PETA and other animal-protection groups have long been campaigning against Pamplona's annual bloodbath. At last year's San Fermín festival, members of Vegan Strike Group were hauled away by officials after jumping into a bullring to shield a bull who lay bleeding and dying from knife wounds.