The history of popular music is littered with stories of internal feuds and external relationships that drive cracks in bands or tear them apart. The Beatles, Metallica, the Stones, Oasis – the list is long.

These fights make great reading and help sell ageing musicians’ biographies by the bucketload. But what is often not talked about is the way conflict can have a positive effect on the quality of the songs written.

The Beatles’ 1968 hit Ob-La-Di, Ob-La-Da certainly succeeded by pop music’s measure of chart success. As Geoff Emerick, their long time sound engineer, recalls, it might never have seen the light of day if John hadn’t got fed up with Paul’s “granny music shit” and started madly pounding at the piano keys in frustration. This suddenly brought the track to life, becoming the song’s famous opening.

Fast forward 25 years to 2003, when Metallica hired a performance enhancing coach, Phil Towle, to be on hand in the studio while they were recording their 8th album, St. Anger. The internal feuding was well documented in the fascinating film Some Kind of Monster.

Vocalist James Hetfield was so controlling that he insisted they only work on the album for four hours a day; the rest of the band couldn’t do anything else musically outside of this time frame. This riled other band members such as drummer Lars Ulrich. Yet the album went on to top charts around the world.

The film Some Kind of Monster detailed conflict within Metallica while making their 8th album.

When romantic attachments within a band lead to a break up, things are more complex. Still, even these conflicts can be a source of great art. Think of Fleetwood Mac’s Rumours – with tracks such as The Chain and Go Your Own Way – which sold 20 million copies in the United States alone. Or Richard and Linda Thompson’s last album as a husband and wife duo, Shoot out the Lights, which became their most critically acclaimed work.

Go Your Own Way was a break up song.

Of course not all band conflicts end with great art. Some just get messy. The Smiths broke up in 1987. When the band’s former drummer Mike Joyce took Morrissey and Johnny Marr to court in 1996 over royalty claims, the judge found in favour of Joyce, saying that Morrissey was “devious, truculent and unreliable”. The Police, The Clash and The Pixies are other great bands that didn’t survive internal conflict. 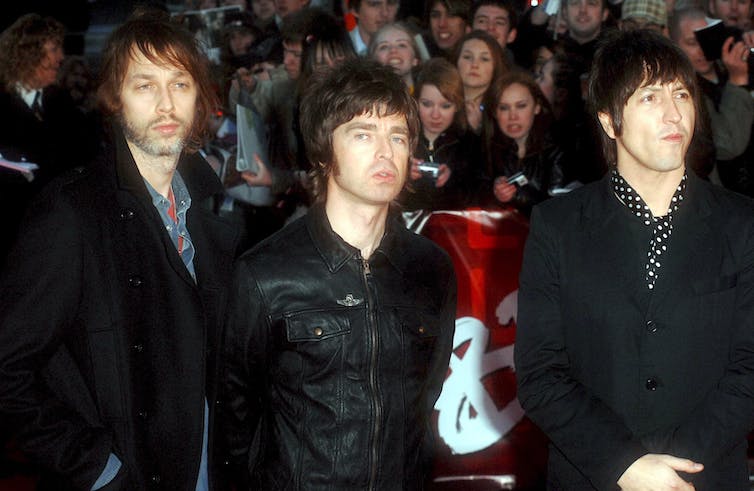 The members of Oasis arrive for the 2007 Brit Awards. The band broke up in 2009. DANIEL DEME/EPA

But we rarely hear about the precise moment when songs are being created, and how conflict between band members can be crucial to making better music.

As a contemporary music lecturer, I am often in a room with students deep into the songwriting process. I stress the importance of respectful and constructive communication when collaborating. But I’m aware that in studios and garages around the world there are bands at each other’s throats arguing about whether the chords in the bridge are any good or if the guitar sound in the chorus is right or whether that beat sounds too much like their last five songs.

In my own band, we argue all the time. We have been together for nearly 20 years and made five albums. The tracks for the last two albums were made mostly by the three of us in a room thrashing away at our instruments to generate and refine ideas.

We set up a video camera in the corner of the room to capture the process. Later, we looked at the footage and found two 30-minute sections of intense argument as we tried to come up with a bridge section in one song. The most interesting discovery was how important such moments of conflict were in propelling the musical ideas forward.

If we were stuck for an idea, or playing something that one of us thought was just lame, our drummer would often stop and offer a provocative sledge. “Play something other than clown music!” he’d say. Or, “this is not university, this has to be something that sounds good and has a bit of attitude”. Then we’d try again. This process worked in the opposite way that sledging does on the cricket field – it improved our musical performance.

Of course as a band we have a long shared history with a fair share of ups and downs. I would not recommend the “conflict as strategy” approach to a new band, and definitely not to a group of students.

It takes time for a band to reach what American psychologist and creativity expert Keith Sawyer calls a state of group flow. Or as UK music psychologist Fred Seddon would put it, a state of empathetic attunement. But the results can move you way beyond the contemporary equivalent of “granny music shit”.