This week Melbourne’s water storage dropped below 50%, a sign of the prolonged and deepening drought gripping eastern Australia. Sydney is only marginally better off, at 53.8% of full storage.

Along with many regional towns across southeastern Australia, the two largest capital city water supplies are steadily shrinking.

But while Melbourne’s water levels are lower, if we look at the last 12 months we see another story: Sydney has plummeted from 72.3% to 53.8%, while Melbourne has only dropped from 58.9%.

So why do Sydney residents use so much more water than people in Melbourne?

Sydney is using far more water than experts predicted. In March 2017, Sydney released a Metropolitan Water Plan. Among the glossy pictures is a graph that indicates how thirsty Sydney is.

It predicted that by 2018, Sydney would be using around 550 gigalitres (GL) a year. But Sydney’s actual 2018 consumption was 600GL, far higher than the “high use” estimate.

In fact, back in 2017 experts thought Sydney would only need 600GL for normal use in 2040, when the population would be far higher. 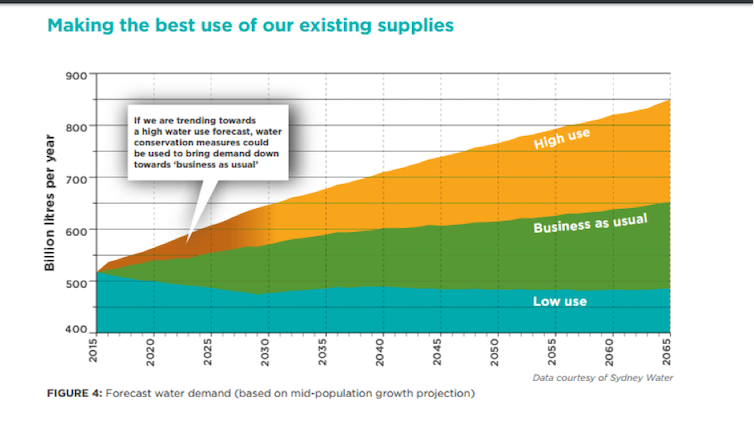 This chart, from the 2017 Sydney Metro Water Plan, fell far short of actual water use in 2018.

Sydney’s actual water use is shown below. Crucially, the 2016 mark – where water use begins a sharp increase – is the same time water prices in Sydney fell by 13.5% (more on this in a moment). 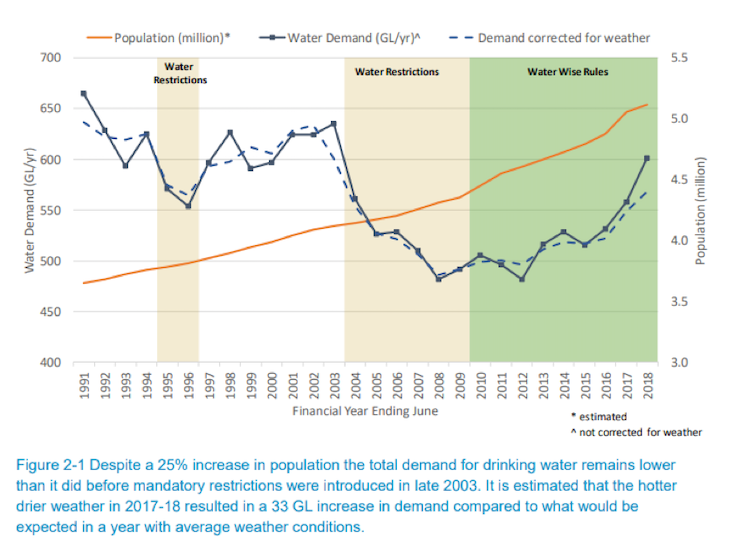 Sydney Water 2017-18 Water Conservation report It must be remembered that Sydney and Melbourne residents both consume less water than before the millennium drought. Sydney guzzled more than 600GL a year for seven of the years between 1991 and 2003. Due to the influence of water restriction and the millennium drought, consumption fell to about 480GL. In Melbourne stores also fell steeply, even more sharply than in Sydney, from 500GL in 2000 to a low of 343GL in 2010.

Melbourne’s water stores dropped dramatically in 2010. Melbourne Water, 2016 Desalination Both Sydney and Melbourne have large and expensive desalination plants, which supplement their water supplies. Sydney Water will begin preliminary planning to double the size of its desalination plant when water stores fall to 50%. Based on recent months, this is likely to be reached in the next two months or so. Sydney’s desalination plant is relatively small, as it currently is capable of supplying 15% of the daily water demand. In comparison, Perth’s two desalination plants can produce about 50% of its water demand. Is water too cheap? The lower water use per resident of Melbourne is a major element in the city’s lower water thirst. If you live in Sydney and use the average amount of water a day (210 litres per person per day) that will cost you just 48 cents per day. The price is A$2.28 per thousand litres. Water is far more expensive in Melbourne, which has variable pricing for residential water. The more water you use, the higher the progressive cost per litre. Each of Melbourne’s three water retailers charge more money for low and high water usage. For example, Yarra Valley Water charges A$2.64 (per 1,000 litres) for water use less than 440 litres a day. For more than 881 litres a day it charges A$4.62, which is 75% higher than the lowest water use charge. For intermediate amounts the charge is A$3.11. This sends an important price signal to residents – it pays to conserve water. In comparison, Sydney charges a flat rate for each litre of water, with no penalty for higher water users. Sydney is not alone in charging a flat price for residential water use. So do Darwin and Hobart. Canberra has the highest charge for higher water users (A$4.88 per 1,000 litres). Was dropping Sydney’s water prices in 2016 a mistake? It is not a simple thing to change water prices in Sydney – the prices Sydney Water charges its customers are set by an independent pricing regulator (IPART). Based on advice from Sydney Water, IPART dropped the price of residential water in 2016 by 13.5%. This was broadly welcomed as a reduction in the cost of living in Australia’s most expensive city. This coincides with a sharp rise in the total consumption of water in Sydney in 2016, 2017 and 2018. As drought continues to bite in southeastern Australia the water authorities have a number of plans to save water, especially water lost from leaking infrastructure. Currently about 7.5% of Sydney’s water (129.5 megalitres per day) is lost from leakage from its 22,000km of pipes. Sydney Water has explained that hotter weather in 2018 made clay soils expand and crack underground water pipes, exacerbating this problem. Prepare for water restrictions Compulsory water restrictions are planned to begin in Sydney as soon as the available storage drops below 50%. This follows major success in millennium drought, when Sydney had water restriction from 2003 to 2009. 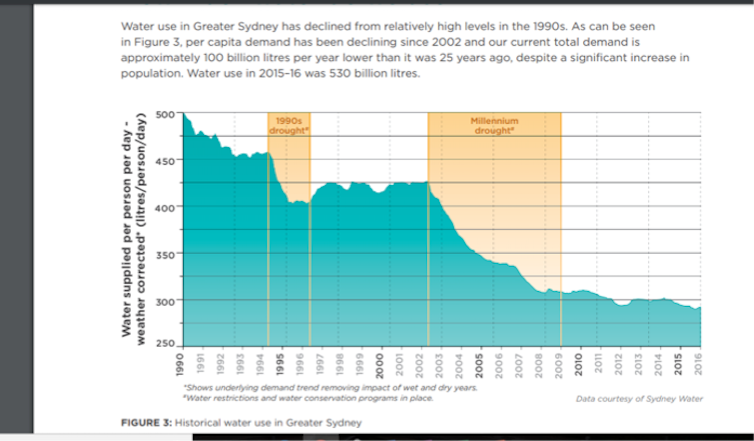 water. The Victorian government has laws in place to impose fines and even jail for offenders that breach water restrictions during the most severe drought conditions. With no end to the drought it sight, it may be time for Sydney to learn from Melbourne. Sydney could easily put a higher price on water, with higher users eventually paying more per litre.