More than 28,000 species around the world are threatened, according to the Red List of Threatened Species compiled by the International Union for the Conservation of Nature (IUCN). The list, updated on Thursday night, has assessed the extinction risk of almost 106,000 species and found more than a quarter are in trouble.

While recent headline-grabbing estimates put as many as 1 million species facing extinction, these were based on approximations, whereas the IUCN uses rigorous criteria to assess each species, creating the world-standard guide to biodiversity extinction risk.

This Red List update doesn’t hold a lot of good news. It takes the total number of threatened species to 28,338 (or 27% of those assessed) and logs the extinction of 873 species since the year 1500.

These numbers seem small when thinking about the estimated 1 million species at risk of extinction, but only around 1% of the world’s animals, fungi and plants have been formally assessed on the IUCN Red List. As more species are assessed, the number of threatened species will no doubt grow.

More than 7,000 species from around the world were added to the Red List in this update. This includes 501 Australian species, ranging from dragonflies to fish.

The shortfin eel (Anguilla australis) has been assessed as near threatened due to poor water and river management, land clearing, nutrient run-off, and recurring drought.

The Australian shortfin eel is under threat from drought and land clearing.

Twenty Australian dragonflies were also assessed for the first time, including five species with restricted ranges under threat from habitat loss and degradation. Urban and mining expansion pose serious threats to the western swiftwing (Lathrocordulia metallica), which is only found in Western Australia.

I coordinate shark and ray Red List assessments for the IUCN. Of particular concern in this update is the plight of some unique and strange fishes: wedgefishes and giant guitarfishes, collectively known as “rhino rays”.

This group of shark-like rays, which range from Australia to the Eastern Atlantic, are perilously close to extinction. All six giant guitarfishes and nine out of 10 wedgefishes are critically endangered. 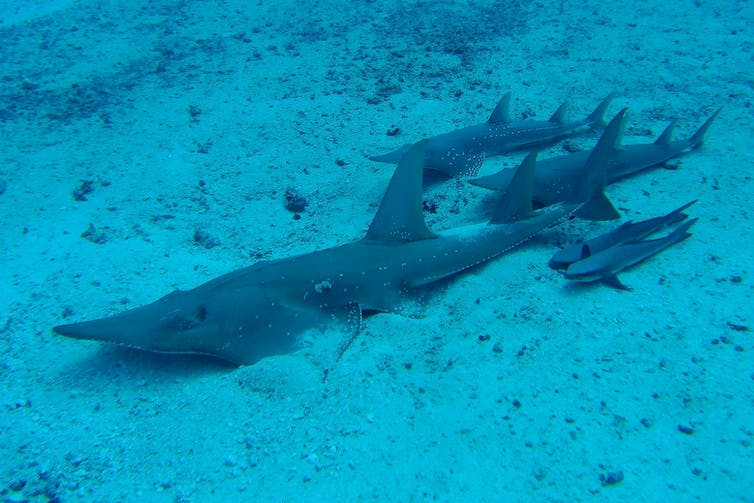 While rhino ray populations are faring comparatively well in Australia, this is not the case throughout their wider Indo-Pacific and, in some cases, Eastern Atlantic ranges, where they are subject to intense and often unregulated exploitation.

The predicament of rhino rays is driven by overfishing for meat and their valuable fins. Their meat is often eaten or traded locally and, along with other sharks, rays and bony fishes, is an important part of coastal livelihoods and food security in tropical countries. Their fins are traded internationally to meet demand for shark fin soup. The “white fins” of rhino rays are highly prized in the trade and can fetch close to US$1,000 per kilogram.

Read more: Undocumented plant extinctions are a big problem in Australia – here’s why they go unnoticed

This exploitation for a high-value yet small body part places the rhino rays in the company of the rhinoceroses in more than name alone. 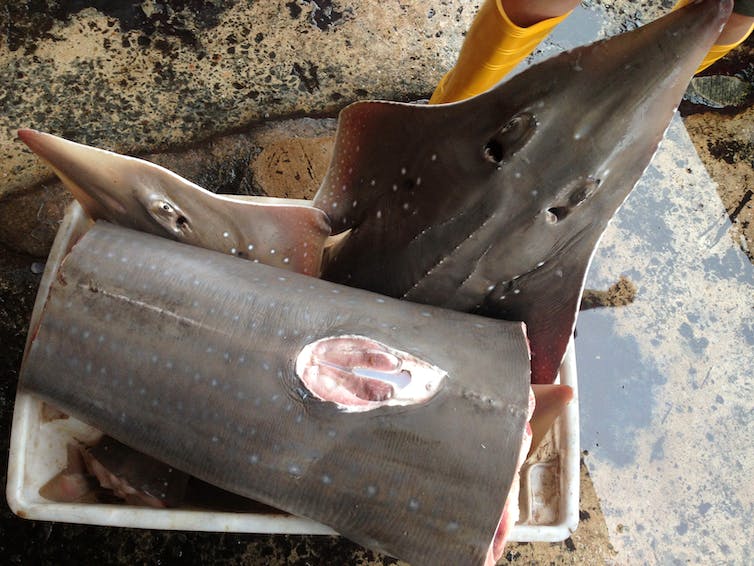 Two species in particular may be very close to extinction. The clown wedgefish (Rhynchobatus cooki) from the Indo-Malay Archipelago has been seen only once in over 20 years – when a local researcher photographed a dead specimen in a Singapore fish market.

The false shark ray (Rhynchorhina mauritaniensis) is known from only one location in Mauritania in West Africa, and there have been no recent sightings. It’s likely increased fishing has taken a serious toll; the number of small fishing boats in Mauritania has risen from 125 in 1950 to nearly 4,000 in 2005.

This rising level of fishing effort is mirrored in the tropical nations of the Indo-West Pacific where most rhino rays are found.

Effective rhino ray conservation will require a suite of measures working in concert: national species protection, habitat management, bycatch reduction and international trade restrictions. These are not quick and easy solutions; all will be dependent on effective enforcement and compliance.

Read more: From sharks in seagrass to manatees in mangroves, we've found large marine species in some surprising places

The challenges of saving rhino rays illustrate the larger, mammoth task of tackling our current extinction crisis. But the cost of inaction is even larger: precipitous loss of biodiversity and, eventually, the collapse of the ecosystems on which we depend.

This article was co-written by Caroline Pollock, Program Officer for the IUCN’s Red List Unit.