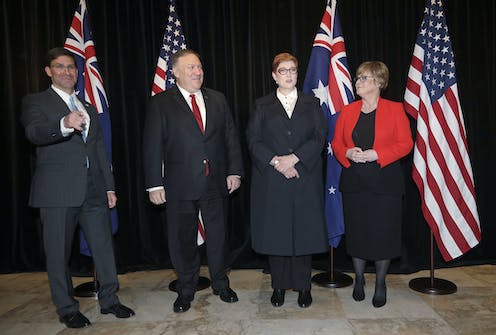 The federal government is expected soon to approve a commitment in response to the United States’ request for allies to help protect shipping as tensions with Iran remain high.

Speaking at a joint news conference after the AUSMIN talks, Defence Minister Linda Reynolds on Sunday said the government was giving the request “very serious consideration”.

Although Reynolds said no decision had yet been made, it would be highly unlikely the request would not receive a favourable answer.

Meanwhile, on Sunday it was reported that Iran state TV said the country’s naval forces had seized another foreign tanker and that seven sailors had been detained. The Iranians said the vessel, carrying 700,000 litres of fuel, was smuggling the fuel to Persian Gulf Arab states.

It is not clear what form Australian assistance would take.

Prime Minister Scott Morrison has previously said, when talking about a possible request, “it’s not unheard of to have Australian frigates in that part of the world engaged in maritime operations”.

However Australia does not currently have a ship in the region. An alternative would be to help with aircraft.

“We are deeply concerned by the heightened tensions in the region and we strongly condemn the attacks on shipping in the Gulf of Oman,” she said.

“The request that the United States has made is a very serious one and it is a very complex one. That’s why we are currently giving this request very serious consideration.”

US secretary of State Mike Pompeo told the news conference that the US had been very clear that the purpose of the proposed operations had been twofold.

“First of all, to promote the principle of freedom of navigation and freedom of commence through all waterways.

"Number two, is to prevent any provocative actions by Iran that might lead to some misunderstanding or miscalculation that could lead to a conflict.

"When we first advanced this idea several weeks ago, we had good response from some of our allies and partners. We continue to develop that idea,” he said.

Esper also met Morrison on Sunday afternoon and Morrison had Pompeo to dinner on Sunday night.