Buried almost at the end, in the penultimate clause of the seven-page document, was the outcome several nations (including Australia) have been clamouring for – or a version of it, at least. The resolution calls for a global investigation into the origins of the COVID-19 outbreak, albeit not in the strongest of terms.

With noticeable caution, it calls on the WHO to:

…initiate, at the earliest appropriate moment, and in consultation with Member States, a stepwise process of impartial, independent and comprehensive evaluation, including using existing mechanisms, as appropriate, to review experience gained and lessons learned from the WHO-coordinated international health response to COVID-19.

Read more: The World Health Organization must answer these hard questions in its coronavirus inquiry

Specifically, the inquiry will investigate:

Some media and politicians hailed the resolution as a vindication of Australia’s call for a deep and searching independent investigation, with a particular spotlight on China’s role in containing the initial outbreak. But China has branded this claim “a joke”.

So what does the resolution actually add, and is it likely to deliver anything concrete?

It is a great example of well-constructed UN “bureaucratese”. It has something for everyone but demands little from anyone. But buried in the verbiage are some important considerations, which suggest how to forge the way ahead.

Australia can take comfort that there is to be an “impartial, independent and comprehensive evaluation”. But it’s not exactly what Australia had in mind. It is left to the WHO’s director general, Tedros Adhanom Ghebreyesus (himself a target of criticism by the United States), to initiate such an enquiry. The timing is vague, although a report on progress (which presumably could include delaying the inquiry altogether), is expected a year from now. 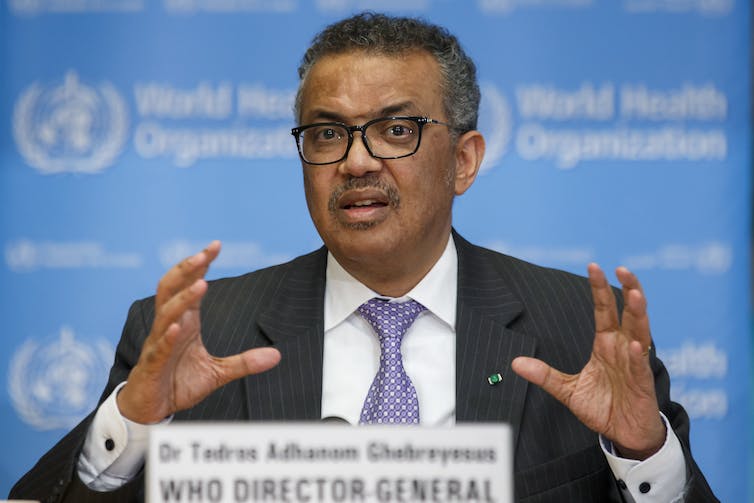 It will fall to WHO director general Tedros Adhanom Ghebreyesus to initiate the probe, perhaps not until after the pandemic is over. Salvatore di Nolfi/AAP Image

Many countries, including China and several European states, argue such an investigation is needed, but not now. They would like the pandemic to be under control first. But when might that be? It might yet intensify, and could grind on for years. Even if an effective vaccine is developed, getting it to the people of the world will take years, and until almost everyone is vaccinated, nobody will be entirely safe.

The WHO has previously set up investigations into the H1N1 epidemic in 2009 and the 2015 Ebola outbreak. These were led by respected, independent, evidence-driven global health leaders. So we can be confident the WHO has access to people of the right calibre to mount a rigorous and critical inquiry.

Australia will presumably also be gratified by another clause of the resolution, which calls on the WHO, alongside the World Organisation for Animal Health (OIE) and the Food and Agriculture Organization (FAO), to identify the animal source of the virus and its route of introduction to the human population. Australia’s deputy chief medical officer, Paul Kelly, has cited the risk of such “zoonotic diseases” as a major concern.

Sitting outside the broader evaluation of the WHO response to the pandemic, Australia should actively support an in-depth study of the interfaces between animal and human diseases. Facilitating and resourcing such an investigation in relation to COVID-19, leading to evidence-informed guidance, would be a solid global contribution.

Australia and others can also draw satisfaction from a clause in the resolution calling on all countries to provide the WHO with “timely, accurate and sufficiently detailed” information on the COVID-19 pandemic. Improving incentives to report early and promptly, such as the offer of financial support to offset any recommended travel or trade restrictions, would sharpen the International Health Regulations which frame such action.

Despite being the source of the pandemic, the resolution does not single out China (or indeed any country) for particular scrutiny or accountability. Several clauses refer instead to “national context”, a commonly used piece of diplomatic language that glosses over political contentions.

Read more: Yes, we need a global coronavirus inquiry, but not for petty political point-scoring

With more than 5.1 million people infected and 332,000 deaths so far, the world needs cooperation, collaboration and coordination. The resolution offers important elements, and reinforces important values: balancing public health measures alongside human rights and economic concerns; transparency of information; solidarity with the people most affected; a focus on the most vulnerable; support to health workers; and global equity in access to testing, PPE and, ultimately, a vaccine.

All nations must play a part in the global push to curb COVID-19. The political blame games and the United States’ threat to cut funding to WHO are unhelpful.

The WHO should be supported and strengthened to puruse its vital work, and to overcome the weaknesses in current and previous epidemic responses. It needs to be better resourced, better structured and better respected to fulfil the roles we expect and demand of it.

Wealthy countries like Australia should do more to bolster multilateral institutions like the WHO as well as to support low and middle income country health systems. Since 2012 Australia’s official development assistance to health has fallen from almost A$1.8 billion in 2012 to A$1.1 billion in 2018. If Australia really wants its voice to be heard in a forum such as the World Health Assembly, it should step up and let others follow its example.