For the past three years, I have been researching Australia’s transgender history and have had the privilege of interviewing trans women and men who play sport and, to varying degrees, faced fights over their right to play.

Rugby union is the latest front in the battle over transgender participation in sport.

In July, The Guardian reported that World Rugby – the international governing body for the sport – prepared draft guidelines on a new transgender policy.

These guidelines would ban trans women and non-binary people assigned male at birth from competing in women’s rugby. They argue trans women pose a safety risk to cisgender women players.

The policy is much stricter than any other sport, and certainly more so than the International Olympic Committee (IOC) rules adopted in 2015.

I brought the proposed guidelines to the attention of colleagues who specialise in sport management, sport science and public health, as well as others who conduct research with trans and gender diverse people. With the support of these scholars and transgender rugby players – including Caroline Layt – we drafted an academic response to World Rugby.

The letter, published this week, focuses on three key points:

Eighty-four scholars have signed the letter from over 60 universities in eight countries.

A long history of fighting for inclusion

Debates over trans women in sport have been going on since American tennis player Renée Richards was outed as transgender in 1976. At the time, the Lawn Tennis Association of Australasia said Richards would not be eligible to compete in Australia, and Margaret Court was reported as saying

I wouldn’t be found playing on the same court as him. I would flatly refuse to take part. 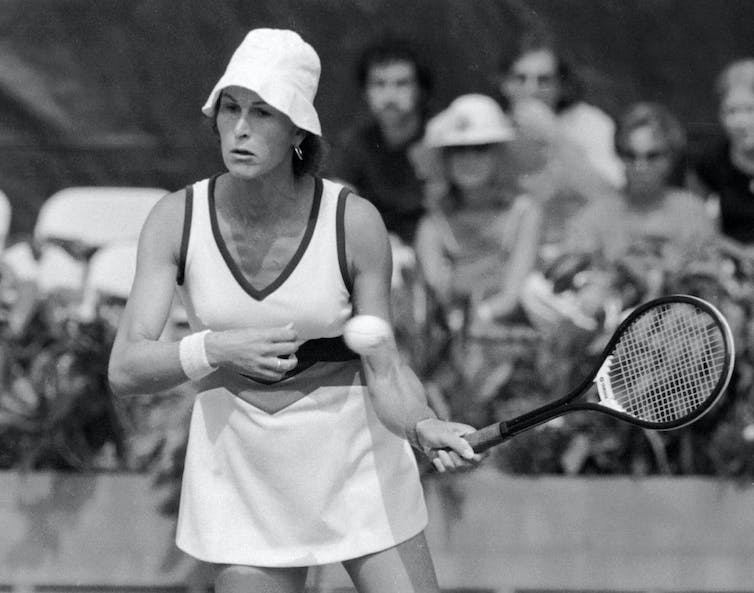 Renee Richards playing at the 1977 US Open. DAVE PICKOFF/AP

Perhaps the first public example of an Australian trans woman banned from sport was in 1982. A Sydney lawn bowls club declared Noelina Tame ineligible to register as a woman and ordered her to hand back her subscription to NSW Women’s Bowling Association.

She challenged the decision in court, but at the time, anti-discrimination laws did not protect transgender people.

The debates over transgender participation in sport heated up in the 1990s when runner Ricki Coughlan was unwittingly outed in 1991. Amid the ensuing media storm, Athletics NSW affirmed Coughlan’s right to compete.

Other sports became pioneers in accepting trans women, particularly at the grassroots level. In 1995, the national president of Women’s Cricket in Australia declared

Women’s cricket is a game for everybody and we don’t care about shape, size, religion or sexual preference – we even have transsexuals playing.

Then, in 1999, the Adelaide Advertiser broke the story of openly transgender golfer Mianne Bagger. She won the South Australian women’s amateur championship that year after Women’s Golf Australia permitted trans women to compete in amateur competitions. 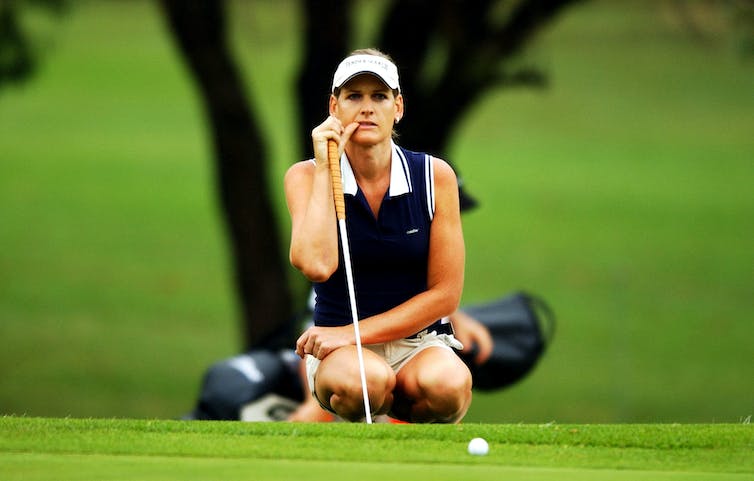 Mianne Bagger became the first transgender golfer to compete in a professional tournament at the 2004 Women’s Australian Open. DEAN LEWINS/AAP

The same arguments used against Coughlan and Bagger back then continue to reverberate with trans athletes today: trans women are not really women and have an “unfair advantage” over their competitors. Men will just claim to be women to secure an advantage or to invade women’s spaces.

A key point that Coughlan, Bagger and other athletes shared with me was that most of their teammates and competitors had no problem with them. Criticism came primarily from a minority of athletes who had not met them, or commentators, officials and politicians far removed from their lives.

That said, other interview participants who competed in the 2000s and 2010s certainly faced transphobia on and off the field.

In 2004, the IOC adopted the Stockholm Consensus for trans participation in the Olympics, which required gender affirmation surgery, at least two additional years of hormone treatment and testosterone levels within a certain range.

The IOC rules have consistently served as a benchmark guiding sporting organisations around the world.

Read more: Elite sport is becoming a platform to target the trans community

They produced guidelines that outlined many issues, including

Even among transgender athletes and community groups, though, there is no consensus on what the rules should be for trans women and non-binary people in sport.

Some of the sportspeople I have interviewed support a more restrictive approach similar to the Stockholm Consensus. Others are satisfied with the updated 2015 IOC rules, which removed the surgery requirement and focus on testosterone levels instead.

In their interviews, none supported a complete ban like World Rugby has proposed – especially when it comes to amateur, grassroots sport. That said, Bagger has endorsed the process undertaken by World Rugby on Twitter.

This diversity of views underpins the very need for World Rugby to undertake a wide consultation process.

What is new about World Rugby’s proposed guidelines is the research and scientific modelling underpinning them.

However, one of the studies cited in the proposal — with reproduced charts — has yet to be peer-reviewed.

There has also been little engagement with trans sportspeople and organisations — a point confirmed by trans rugby player Verity Smith and scientist Joanna Harper, who were the only two trans athletes invited to speak at a forum organised by World Rugby in February.

World Rugby has defended the rigour of the research and its consultation process, saying

World Rugby has operated a fully inclusive and extensive transgender guideline consultation process with relevant bodies as evidenced by the ground-breaking workshop in London.

Other sporting bodies have embarked on more meaningful consultation processes. I often point to Cricket Australia as a model of best practice in how to develop inclusive guidelines for trans and gender diverse athletes.

So far, only Rugby Canada has publicly stated it will not support or adopt the proposed guidelines, which go to a vote among member unions at the World Rugby Council meeting in November. Rugby Australia has not publicly taken a stance yet.

The principle underpinning ethical research with marginalised groups certainly rings true in this case: “nothing about us without us”. It is time that World Rugby and the member unions adopt a similar approach.