This year’s Emmy Awards saw some surprising and not so surprising moments. Perhaps the most astonishing event was the Canadian-produced comedy Schitt’s Creek winning seven major awards, including best comedy series, director and writing.

Schitt’s Creek started airing in 2015, wrapping up earlier this year. The show revolves around the ultra-rich Rose family who, after being defrauded by their business manager, are left with only one asset: a backwater little town called Schitt’s Creek, which Johnny (Eugene Levy) bought his son David (Dan Levy) as a joke in 1991.

Faced with financial ruin, the Roses move to this town, where their privileged attitudes come into conflict with the parochial residents including the motel’s manager Stevie Budd (Emily Hampshire) and the town’s mayor, Roland Schitt (Chris Elliott).

Critics and fans did not totally embrace the show in its first season, with a rating of 64% on Rotten Tomatoes and 73 out of 100 on Metacritic. But subsequent seasons have certainly grown on audiences.

Personally, I’m not so enamoured with the show, but have some theories as to why it won in so many categories.

Helped along by a cliche …

This “fish out of water” premise is basically a cliché in script writing circles. There’s not a lot of originality here.

There is not a lot to explore in this genre nowadays, it’s just a device to get the characters into a situation from which comedy can derive.

By using this framework for the series, the jokes about misunderstandings between the spoilt and aloof Rose family and the down-to-earth locals almost write themselves.

This juxtaposition makes conflict easy. From a writing point of view, there’s not a lot of hard work here, so I’m amazed Daniel Levy won the comedy writing award considering his competition was the complex storytelling of The Good Place (2016-20) or The Great (2020–).

Read more: Kantian comedy: the philosophy of The Good Place

When you consider Levy won the award for the final episode of Schitt’s Creek, you begin to question whether it was actually for that episode or really an acknowledgement for the whole series. 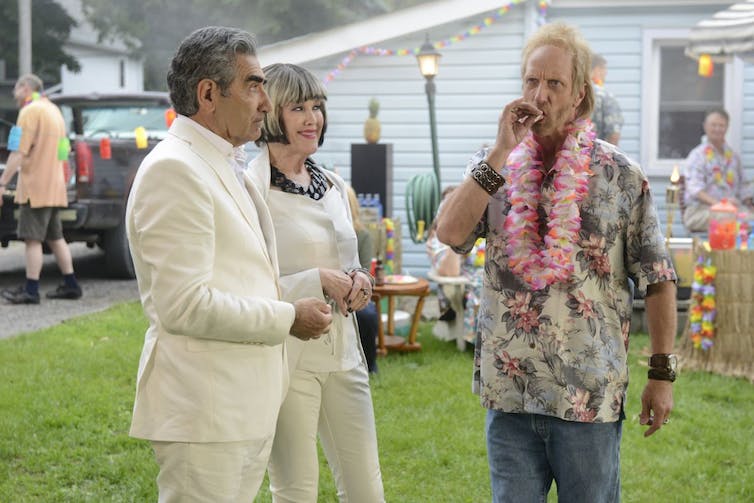 A classic fish out of water story. CBC

The stars of the show, Eugene Levy and Catherine O'Hara, are well regarded as comedy royalty.

Levy has always been a character actor, playing small parts in comedy films and series until he really came to be noticed in American Pie (1999) and as part of the ensemble cast of the Christopher Guest’s mockumentary comedies Waiting for Guffman (1996), Best in Show (2000) and A Mighty Wind (2003).

Even though he’s been acting since 1970, this is really his first lead role. He beat some of Hollywood’s most notable TV actors to win the Emmy for best actor in a lead comedy series, including Michael Douglas and Ted Danson. 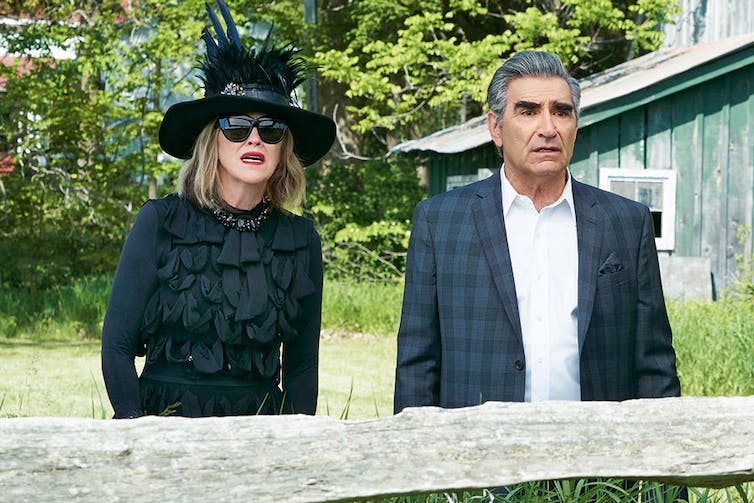 O'Hara, who won the Emmy for lead actor in a comedy series, has also acted in character roles most of her career, including opposite Levy in the same Guest mockumentaries. Schitt’s Creek is her first leading role in a television series.

The Emmys they won were not so much for one series, but for a lifetime of comedy achievement.

Ultimately, though, it was a weak year for TV comedy nominations.

Among the nominations for best comedy, most of the series were either well worn (Curb Your Enthusiasm has been running for 20 years), relatively new players (The Kominsky Method (2018-)), or just haven’t fired the imaginations of audiences (Insecure (2016–) and The Marvelous Mrs Maisel (2017–)).

Many were also very specifically issue-based comedies, which don’t usually attract wide audiences. The Marvelous Mrs Maisel has a strong feminist storyline while Insecure deals with the Black female experience.

Schitt’s Creek — like the name implies — plays it broad and is much more accessible to a mainstream audience. 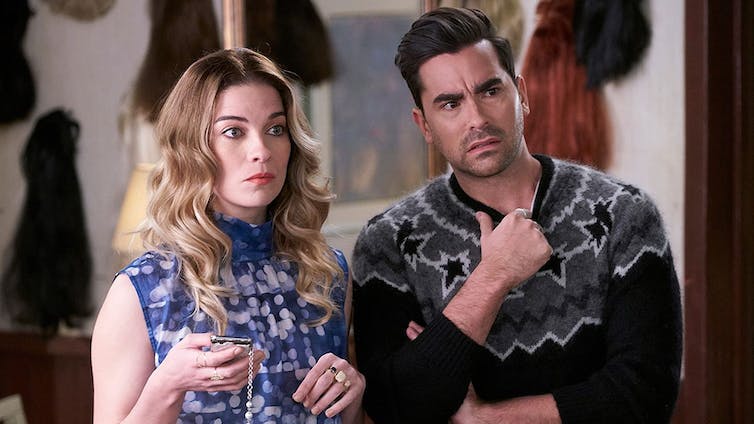 In an awards event, this show becomes seen as being more worthy because it has been on for a number of seasons without wearing out its welcome, it has broad and popular appeal, and it doesn’t try to confront audiences with “issues”. It becomes the safe choice.

While the show does sparkle in later seasons with some good writing, it feels like Schitt’s Creek was given the awards more for the accumulation of a body of work rather than a stand alone episode or season. Especially since it had not won a single Emmy in any of its previous five seasons.

Some shows (and actors) don’t get the award for being brilliant, they get it for just being around for a long time, like a comfortable pair of slippers. You get used to them, and you like them being there.

Basically, you reward them because they don’t end up giving you the Schitt’s.