“Last night I dreamt I went to Manderley again,” the book begins — though it is not Rebecca who speaks.

This is the strange paradox of Du Maurier’s novel: its characters are doomed to refer (and defer) endlessly to Rebecca, who “always” did things, perfectly and elegantly, a certain way, while Rebecca herself never appears.

It is the novel’s unnamed narrator who speaks that first line — the second Mrs de Winter, a woman perpetually in her predecessor’s shadow. She is quite simply, not Rebecca — her husband’s late first wife.

She is exceedingly young — shy, inexperienced, and under the thumb of a wealthy lady who has employed her as a travel companion. 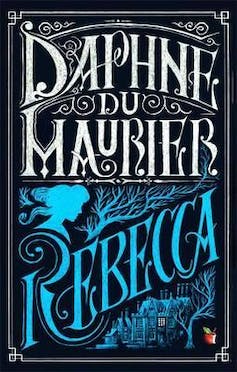 Virago In Monte Carlo, our narrator meets Maxim de Winter, a tall, dark and handsome aristocrat, recently widowed. He swiftly rescues her from drudgery, proposes marriage, and takes her back to England to live in his beautiful and ancient estate, Manderley. The dual spectres of Rebecca and Manderley haunt de Winter and his bride but the circularity of the narrative makes escape impossible. The novel begins at the narrative’s end, retelling the events leading to the couple’s nomadic life. Retrospection taints the novel with a pervasive sense of inevitable doom and a desperate sympathy for the naïve young narrator. Now, night after night, she must dream of Manderley again — of its beauty, to be sure, but also, too, of its oppressiveness. The name “Rebecca” means to tie or to bind, a further allusion to the first Mrs de Winter’s stranglehold on her home and its inhabitants even after her death. She is imprinted on the house and on its (housekeeper, the silent and sinister Mrs Danvers, whose passionate obsession with her former employer is echoed in Carol Ann Duffy’s poem, Warming Her Pearls (1987). Mrs Danvers’ snide comments constitute Rebecca’s continuing manipulations, even beyond the grave. When Manderley hosts an annual costume ball, for instance, the second Mrs de Winter is anxious to impress her new husband and his guests. Mrs Danvers encourages her to dress as Caroline de Winter, one of her husband’s ancestors, whose imposing portrait graces the mansion’s hall. But when she makes her grand entrance, her husband angrily orders her to change. Rebecca had worn an identical costume the year before. Mrs Danvers’ goal of humiliation is achieved. ‘I’m asking you to marry me, you little fool.’ A new Netflix adaptation maintains the off-kilter power dynamic of the source text.A limited perspective The novel’s use of first-person narration in some ways limits us to the inexperienced worldview of the young narrator. She stands in for the hordes of young women of the interwar period, their families lost to the war while these young women were left to navigate the world unchaperoned and alone, without interested parties available to approve or consider their choice of husband. But the reader does come to understand the narrator’s naivety, and to see what she does not see, with increasing anxiety for her safety. While she cannot see beyond Maxim’s charm, or conceptualise Mrs Danvers’ obsession with Rebecca, the reader looks on helplessly as she experiences what we now recognise as “gaslighting”. 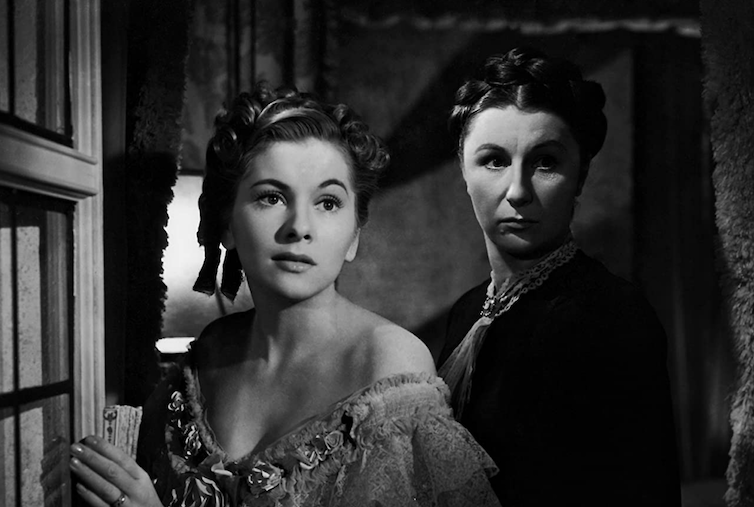 Joan Fontaine and Judith Anderson in Hitchcock’s 1940 adaptation. IMDB Read more: Explainer: what does 'gaslighting' mean? Rebecca can be recognised as part of the genre of the “female gothic”, critic Ellen Moers’ term for works that derive their terror from women’s domestic entrapment and manipulation, as in the Bluebeard folktale. Female gothic narratives seek to expose the psychological manipulations and abuse of power disguised as romance. This alone explains the narrator’s continued sympathy for her “wronged” husband, even at the novel’s end. This use of the female gothic also constitutes a critique of the novel’s source text: Du Maurier’s Rebecca is a reimagining of Charlotte Bronte’s Jane Eyre (1847), in which Jane is disturbed by the looming presence of Mr Rochester’s first wife, the infamous “madwoman in the attic”. Whereas Jane’s ultimate devotion to her husband is celebrated in that novel, Du Maurier encourages her reader to recognise her narrator’s powerlessness Read more: Emily Brontë's fierce, flawed women: not your usual Gothic female characters Birds, horror and adaptation Du Maurier’s writing has always lent itself to cinematic adaptation, particularly as horror. Perhaps most famously, Alfred Hitchcock adapted her short story to make The Birds, his 1963 film, while Nicholas Roeg’s adaptation of her story Don’t Look Now (1971) was screened in 1973. Rebecca’s psychological suspense drew Hitchcock’s attention, and he swiftly adapted it as a film, released in 1940 starring Laurence Olivier and Joan Fontaine. Hitchcock’s Rebecca won the Academy Award for Best Picture that same year. It also spawned a range of commercial products such as the “Rebecca Luxury Wardrobe” and the “Rebecca Makeup Kit”, one of the first films to do so. ‘Everything is kept just as Mrs de Winter liked it. Nothing has been altered since that night.’ Read more: Psycho turns 60 – Hitchcock's famous fright film broke all the rules Strangely, however, these beauty and fashion products were all associated with Rebecca, a woman who never appears on screen. Hitchcock’s adaptation diverges from Du Maurier’s novel at its conclusion and in the way in which each narrative explains Rebecca’s death. Whereas Du Maurier lays a foundation for Maxim’s capacity for violence, Hitchcock positions him, like the narrator, as a victim of Rebecca’s cruel manipulations. A new Netflix adaptation of Rebecca stars Lily James, Armie Hammer and Kristen Scott Thomas. This follows recent adaptations of Shirley Jackson’s 1959 novel The Haunting of Hill House (2018) and its second season, The Haunting of Bly Manor (2020), a reworking of Henry James’ The Turn of The Screw (1898). Together, these constitute a series of gothic hauntings that draw attention not only to the psychological trauma inherent in those earlier works, but the way in which that trauma and its terrors are profoundly gendered. Rebecca’s capacity to haunt the second Mrs de Winter, Mrs Danvers’ maintenance of her place in Manderley, Maxim’s power over his new bride, and the narrator’s cowing acceptance of all of this, point to the gendered power structures of both the gothic and the marriage plot. Rebecca screens on Netflix from October 21.