CC BY-ND Climate Explained is a collaboration between The Conversation, Stuff and the New Zealand Science Media Centre to answer your questions about climate change. If you have a question you’d like an expert to answer, please send it to climate.change@stuff.co.nz Could biofuels replace all fossil fuels in New Zealand? What are the economic and climate benefits and costs of biofuels, compared to other low-carbon solutions, such as hydrogen? A quick look at the numbers suggests New Zealand would have enough land to produce biomass energy to replace the nation’s current fossil fuel use. But this doesn’t mean we have the technology or could do so economically — nor in ways driven by people’s choices. The Climate Change Commission’s final advice to government, tabled last week, runs the numbers on costs, benefits and alternatives but has no realistic scenario suggesting a complete switch to biofuels would be feasible. After considering submissions, the commission found biofuels and other alternatives, including green hydrogen, could replace more fossil energy than its first estimates suggested. New Zealand’s current demand for fossil fuels is about 570 petajoules (PJ), which breaks down into 70PJ of coal, just under 200PJ of natural gas and just over 300PJ of liquid fuels. Forests covering about 11% of New Zealand’s land could produce this much energy. For comparison, the pastures covering about half the country produce 700-900PJ of energy livestock can metabolise. This drives exports of dairy, sheep and beef products. The pros and cons of biofuels Some insights spring from efforts to compare different forms of energy. Even when converted into the same units, fuels and energy are not easily interchangeable. It may help to put energy into more familiar terms. A dinner serving is around 1 megajoule (MJ), a billionth of a PJ. Compare that to 38MJ of energy content in one litre of diesel fuel — which converts to approximately 10kWh of electricity, worth two or three dollars on a home electricity bill. The electricity is convenient at home, but hard to take with you like a litre of fuel. Liquid biofuels are convenient for transport but harder to produce. And combustion engines waste 65-75% of their energy as heat, regardless of whether they burn fossil fuel or biofuel. Also, any new biofuel production that isn’t from waste usually means we stop producing something that previously had value. 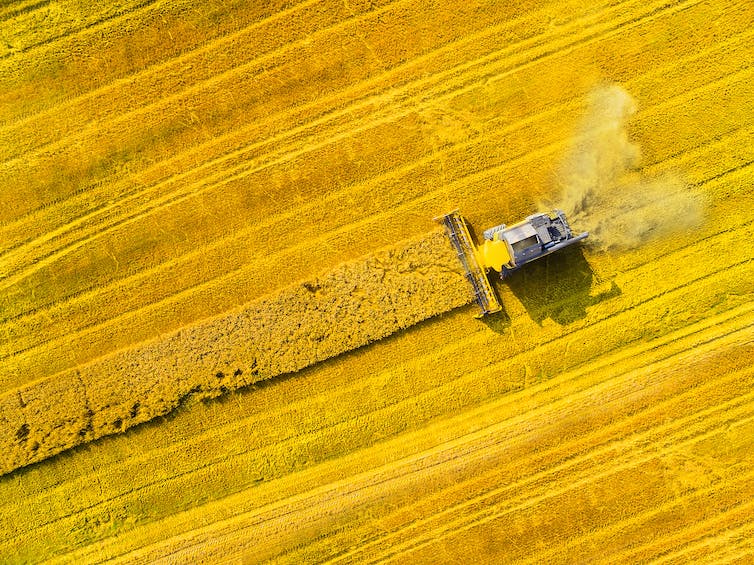 Biofuels can be produced from waste streams, including forestry slash, or by growing fuel crops on land currently used to grow food. Kletr/Shutterstock The conversion of biomass to biofuels also loses a significant amount of energy, and the commission therefore expects biofuels to remain relatively costly. Battery electric vehicles have changed all this, because they are about 90% efficient, making the same energy go three times further than liquid petrol or diesel. Read more: Move over, corn and soybeans: The next biofuel source could be giant sea kelp Many biofuel feedstocks have environmental impacts, from nitrous oxide emissions and soil carbon loss from crops to methane emissions associated with tallow, which is produced as a meat byproduct in sufficient quantity to offset about 2% of liquid fossil fuel use. Forestry slash and waste are even more plentiful and should have lower impacts, aside from possibly contributing to erosion. Saving energy The most beneficial solution is energy conservation. The commission suggests current policies will reduce coal and gas demand to just over 40PJ and 100PJ by 2035, respectively. But growing demand for energy in the transport sector means liquid fossil fuels are expected to increase to a plateau of 400PJ before slowly declining after 2035. The commission produced a demonstration path, which reduces fossil coal, gas and liquid energy use to 25PJ, 80PJ and 270PJ by 2035, respectively, greatly cutting emissions and the need for new renewable energy. A good example comes from replacing the use of coal for process heat with wood, most importantly in dairy factories that dry milk. Read more: Climate explained: could the world stop using fossil fuels today? After conservation, increasing the use of renewable electricity can play a big role. In addition to electric road transport, short regional flights could also be electrified. But batteries and efficient electric motors require mining for lithium and energy and are far from impact-free. Impacts of biofuel production If produced in quantities that exceed current waste streams, biofuels would need land that produces economically valuable agricultural or forest products. Using land for biofuel also limits its use as a forest carbon sink, although new forests planted for biofuels are a temporary carbon sink as they grow. Thus, the costs and benefits of biofuels depend very much on where and how they are produced.

Wood pellets can replace fossil fuel to heat industrial boilers. Aliaksei Charapanau/Shutterstock Growing, transporting and producing biofuels would have some visible impacts, just as today’s fossil fuel production has a footprint that includes mining, drilling, refining, storage and transport. Depending on the location, new forests might change local landscapes and economies, with specific effects such as lower river flows. In 2018, Scion estimated that converting 30% of transport fuel to biofuel would require an area three times the size of Stewart Island and use 55 truckloads per hour. The idea of a biofuel economy is both fascinating and uncertain because it could have dramatic effects on land use, across large areas, with potential benefits such as reduced nitrate leaching or erosion. Future environmental effects are hard to predict because biofuel technologies are still developing, and the future costs of energy and emissions are uncertain. But so are the costs and benefits of many alternatives. Ideas and debate continue to develop regarding the use of hydrogen as a fuel, either in transport or to augment batteries, if efficiency can be improved, or for combustion where it could even be added to natural gas. But hydrogen is only green if it is produced with clean, renewable power.