With its emissions budgets, the Climate Change Commission’s final advice to the government charts a course towards a low-emissions economy. But its comprehensive policy package is arguably the more decisive element — targets can only be achieved if the right policies are in place.

For many years, the Emissions Trading Scheme (ETS) has been the government’s primary policy response to climate change. It puts a price on greenhouse gas emissions, but given New Zealand’s failure to cut emissions, its efficacy has been called into question.

In part, this failure is circumstantial. The ETS was deliberately hobbled by the fifth National government to “moderate” its impact on the economy in the wake of the 2008 global financial crisis.

But recent changes to the ETS settings, especially the introduction of a flexible cap on the total emissions allowed in the scheme, make it more rigorous than ever. The price of New Zealand units (NZUs) has risen correspondingly and, presumably, behaviour change will follow. Or will it?

The commission has taken a clear position that emissions pricing, while necessary for driving the low-emissions transition, is not sufficient. To drive down emissions, the ETS needs complementary policies and tools. Hence the commission’s endorsement of a comprehensive policy package.

Read more: Climate explained: how emissions trading schemes work and they can help us shift to a zero carbon future

This has proven controversial domestically, but it is the standard view in international climate policy circles, including among many economists. A recent expert workshop in the US concluded that:

Why is this the case? Because the real world is more complicated than economic models typically allow.

There are many finicky obstacles to behaviour change, even when an adequate carbon price is in place.

Consumers may lack adequate information, or lack access to capital to purchase cleaner technology (such as electric cars), or lack the authority to respond to the price signal (such as a building tenant who carries the cost of electricity but cannot undertake energy efficiency improvements to a building she does not own). Not every such barrier will require a regulatory solution, but sometimes this will be just the ticket.

Beyond market fixing, there are deeper challenges to market-based approaches such as emissions pricing.

In theory, an emissions price enables markets to identify the least-cost emissions reductions. This is valuable because the more cost-effective the climate policy, the more resources are left over to do further good.

But there are instances where more expensive options make sense, especially from the perspective of long-term strategy. It is well known that investing in expensive technologies lowers their cost over time, such that steeper upfront costs are justified in the long run.

For example, Germany drove down the price of solar panels through feed-in tariffs, which meant Germans overpaid for electricity but also accelerated the global shift to renewable energy.

Similarly, in Aotearoa New Zealand, there are opportunities, especially in agriculture and land use, to make future solutions more cost competitive by investing now.

Take investing in native forests — it’s exactly what will reduce the relatively higher costs of establishment (compared to commercial pine plantations that have enjoyed decades of investment already). The higher cost is currently seen as a reason not to plant native forests.

Read more: Greening the planet: we can't just plant trees, we have to restore forests

Another complication is that some sectors are more sensitive to a carbon price than others. For example, the planting of exotic forest has proved very sensitive to carbon price. So too has electricity because costs are direct and alternatives are available.

But sectors such as agriculture and transport tend to be less sensitive, because costs are diffuse, cultural norms are entrenched, and alternatives are lacking.

An analysis of transport found an emissions price of NZ$235/tonne — about six times higher than today’s price — would be needed to align transport emissions with New Zealand’s international commitments. This is because, in order to change transport behaviour, we ultimately need to change the transport system. 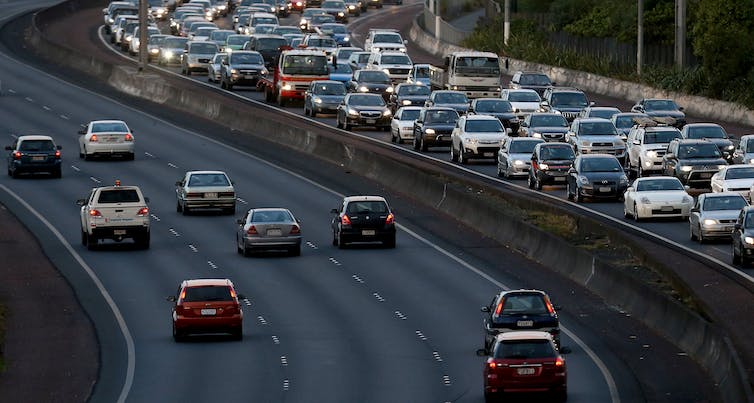 To cut emissions from transport, the system needs to change to reduce people’s dependence on cars. Jason Oxenham/Getty Images

Existing infrastructure creates a lock-in effect which keeps people in their cars even as the emissions price rises, because alternative means of mobility are inadequate. This is known as “price inelasticity” and has likely been significantly underestimated in economic modelling. It is also the source of political pushback because people have no choice except to bear higher costs.

Consequently there is a case for starting early, rather than attempting an expensive transformation of the transport system only once the carbon price reaches a certain threshold. As others have said:

Carbon taxes stimulate a search for low-hanging fruit. That ceases to matter when we know we must eventually pick all of the apples on the tree.

A paradigm shift ahead

It is time to take seriously the notion that climate policy cannot only be about correcting the status quo, but undertaking a major technological transition. What is required isn’t only market-fixing, but a mission-oriented approach which embraces people’s capacity to find solutions and put them into action.

It also involves more than just allocating costs efficiently by emissions pricing, but searching for policy levers that trigger systems change over time, especially through technological tipping points that cascade upwards into a global-scale impact.

It bears emphasising that, even though there is a case for complementary policies, this does not mean every complementary policy is justified. A new way of evaluating policy options, which accounts for the risks and opportunities of the low-emissions transition, is seriously overdue.

Cost effectiveness ought to retain its place as an instrumental value, alongside other principles of justice. But the purpose of the exercise is risk mitigation — that is what climate action should be judged against. Getting that wrong will be more costly and more unjust than the burdens of the transition.