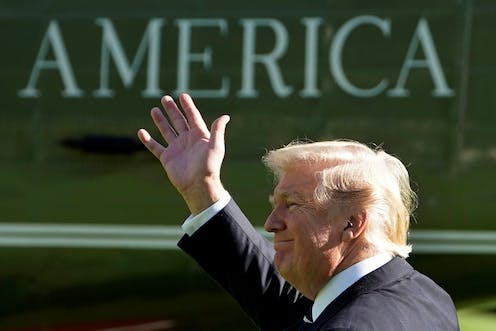 Not for several presidential cycles, and perhaps not since Richard Nixon’s visit to China to initial the Shanghai Communique in 1972, has a visit to Asia assumed such significance – and one that is potentially fraught.

US President Donald Trump leaves Washington late this week for a 13-day tour of Japan, South Korea, China, Vietnam for APEC, and the Philippines before returning home via Hawaii.

In these two weeks, Trump will be exposed to an Asia-Pacific – or Indo-Pacific – that is undergoing a wrenching transformation against a background of risks to a “long peace”. It is one that has survived more or less intact since the end of Korean War, leaving aside Vietnam.

From an Australian perspective, the Trump Asian tour could hardly be more important, given Canberra’s challenge of balancing its security and economic interests.

An American wrecking ball in the region is the last thing Australia needs, especially one that risks mishandling a North Korean nuclear threat to regional security.

In this regard, Trump’s every utterance, including his contributions to social media, will be scrutinised over the next two weeks by a nervous region.

What is striking about this latest period is the velocity of a geoeconomic shift that is challenging long-held assumptions about US authority in the regional power balance.

Seemingly, the Asia-Pacific region can no longer take for granted a US stabilising role.

As China’s power rises, so does US leverage ebb. This is not a zero-sum game.

The question is how pieces of a kaleidoscope will settle, if indeed they do.

Trump’s Asia tour will enable an assessment of the extent to which the US will remain a reliable regional security partner and a participant in various regional forums.

Former president Barack Obama talked about a “Pacific Century”, involving as it did a US “pivot” to the Asia-Pacific. Trump has not used such terminology.

Indeed, one of his first executive acts was to undo work that had been put into US participation in a region-wide trade initiative – the Trans Pacific Partnership (TPP) – aimed partly at countering China’s geoeconomic dominance.

This was a hasty, ill-considered decision that sent all the wrong signals about US commitment to building an Asia-Pacific trading and security architecture.

The other 11 TPP signatories, including Australia, are pressing on with attempts to finalise the trade liberalising protocol, but US absence significantly lessens its weight.

It may be unrealistic – given Trump’s bellicose “America First” pronouncements on trade – but Washington would do its regional credibility no harm if it reversed itself on TPP.

On a visit to Australia last month to launch the first volume of his memoir – Not For The Faint-Hearted – former prime minister Kevin Rudd warned of the risks of the end of a period of relative stability.

His warnings were based on a paper produced by the Asia Society Policy Institute – Preserving the Long Peace in Asia – of which he is president.

In a contribution to the East Asia Forum, Rudd asked the question: how can we save Asia’s “long peace” in light of North Korea’s attempts to develop a ballistic missile nuclear capability?

This has been a crisis long in the making, beginning with the Soviet training of North Korean nuclear scientists and engineers after the second world war, the north’s expulsion of International Atomic Energy Agency inspectors in 2002, and the subsequent series of ballistic and nuclear weapons tests.

The uncomfortable truth is that for the last quarter of a century, the international community has simply been kicking the can down the road. And now, at one minute to midnight, everyone is scrambling on what to do about it.

In Rudd’s view, the Asia-Pacific needs to develop a security understanding – like the Helsinki Accords in Europe – to deal with security challenges, including North Korea and, more broadly, territorial disputes that threaten regional stability.

His preferred option is to bolster the East Asia Summit (EAS) as a regional forum to promote peace and stability. He makes the valid point the EAS has, potentially, the regional heft to undertake such a stabilising role.

Disappointingly, Trump is not planning to stay in the Philippines an extra day for this year’s EAS gathering. It might have been time well spent.

Membership, including the ten nations of the Association of South East Asian Nations, plus China, South Korea, Japan, India, Australia, New Zealand, Russia and the US, means all the main Indo-Pacific players are participants.

This is how Rudd puts it:

The EAS has the mandate to expand its activities in the security domain. The Kuala Lumpur Declaration of 2005 is clear about this. Furthermore, members of the EAS have all signed the Treaty of Amity and Co-operation, which commits partners to peaceful dispute resolution. Moreover, the EAS uniquely has all necessary players around the table.

What is required in all of this is American leadership, but as things stand there is little sign of Washington possessing an overarching vision of where it might take the region in the next stage as China continues to expand its power and influence.

In this regard it is hard to disagree with a Lowy Institute paper – East Asia Policy under Trump. It identified a serious case of drift in American engagement with the region under a president whose knowledge of – and interest in – the Asia-Pacific appears limited at best.

US policy on East Asia is thus on autopilot, which presents two distinct risks. First that of a crisis, whether created by the president or events.

The US faces challenges to its economic leadership from Beijing’s Belt and Road Initiative, a program of massive infrastructure investment that will enmesh the economies of China and its Asian neighbours, challenges from Chinese attempts to shape regional institutions to its advantage, and to shape a narrative of the region’s future that puts Beijing at its centre.

It also faces challenges from an increasingly capable Chinese military. All this in a region that is becoming increasingly illiberal – and doubtful of US staying power.

This is a fairly bleak assessment of a US ability to engage the Asia-Pacific constructively in this latest period. In fairness to Trump, he remains on a steep learning curve. How all this will play out is anyone’s guess.

What is the case is there is no more important stop of Trump’s itinerary than his visit this coming week to China to engage the newly reinforced ruler Xi Jinping.

The China talks, in the lead-up to APEC in Vietnam, are the linchpin of Trump’s Asian foray. The two leaders exchanged a visit in April this year when Xi visited Trump in Mar-a-Lago.

On that occasion, a novice American president was feeling out his main rival for global leadership. This was a getting-to-know-you opportunity.

However, on this occasion more will be expected of a Trump-Xi encounter on issues like North Korea, concerns over China’s mercantilist behaviour, and its assertiveness in the South China and East China Seas.

While it would be unrealistic to expect a “grand bargain” to emerge between the leaders of a new bipolar world, what is needed is some clear guidance about US priorities amid the confusion that has accompanied Trump’s nine months in the White House.

Laying out some sort of vision for US engagement in the region should be a minimum requirement at a time of considerable uncertainty.

Elizabeth Economy of the Council on Foreign Relations put it this way in a CFR blogpost:

The president can allay regional fears that the United States is commitment-phobic, by reinforcing at each step Washington’s allies and partners are the cornerstone of US engagement in the region. Reiterating the US commitment to freedom of navigation, free trade, and political freedoms will also reassure regional actors that it still makes sense to buy into a regional order underpinned by a US alliance system. Of course, this trip is only the first step in putting the United States on firmer ground in Asia, after many months of confusing signaling and disruptive initiatives.

Expectations for Trump’s engagement with the region may be low, but the same could not be said for the stakes at a time of considerable uncertainty and risk.