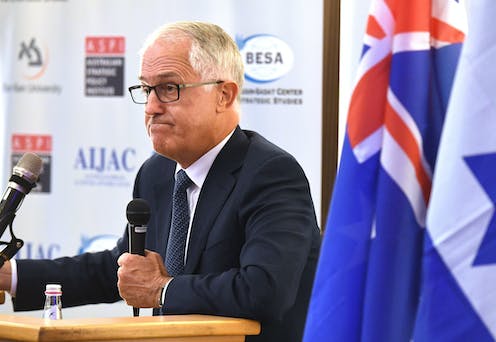 The sudden exit from parliament of Senate president Stephen Parry has turned into a toxic blame game, in a further sign of a government crumbling into chaos.

Malcolm Turnbull and deputy Senate leader Mathias Cormann lashed out at Parry for not publicly revealing earlier his probable British dual citizenship, confirmed this week. Then - oops. It turns out Parry had shared his circumstances with some senior colleagues.

Unsettled by the odium now flowing in his direction, Parry has revealed that when the Nationals’ Fiona Nash in August announced she’d been informed she was a British citizen by descent, he realised he likely was as well.

He spoke to “various ministers”. Though he wasn’t ordered to shut up about his situation, the tone of the conversations suggested he say nothing until the High Court ruled in the “citizenship seven” cases, with the government believing that its two ministers, Barnaby Joyce and Nash, would be found eligible to sit in parliament.

Communications Minister Mitch Fifield has confirmed he was one of the ministers Parry consulted.

“Former senator Parry mentioned to me a few weeks ago that he was endeavouring to check his family’s records,” Fifield said in a statement late Thursday. “The onus is on all senators and members to satisfy themselves of their circumstanced and I encouraged senator Parry to do so. He called me on Monday to say that he had sought advice from the British Home Office and had advised the Attorney-General of this”.

It is believed Fifield did not discuss the timing of the court decision with Parry.

Turnbull was not among those Parry spoke to during those weeks.

The Prime Minister’s current mood about how all this is playing out can be easily imagined.

Turnbull said at a Wednesday news conference in Jerusalem that he was disappointed that Parry “didn’t make public this issue … quite some time ago”.

“I learnt about it probably about the same time you did,” he told journalists.

He wasn’t the only one badly caught out. Brandis had declared he had “absolutely no reason to believe” there were any more Coalition MPs who were dual citizens. That was on Sunday television - just a day before Parry landed a grenade in his lap on Monday.

Brandis that day informed the Prime Minister’s Office, but the information was not passed on immediately to Turnbull. Why? It is said because of the lack of clarity at that stage about the facts.

What an incredible train of events! Instead of telling the Senate’s presiding officer that he should be transparent, for the sake of the integrity of both the government and the parliament, senior government members allegedly encouraged him to wait and see.

This can only reinforce the public’s deep distrust of politicians.

Richard Goyder, outgoing managing director of Wesfarmers, spoke for many when told the National Press Club (before the Parry blowback) that the affair was “almost the straw which broke the camel’s back” on trust.

“To have someone in a position of real authority in the country sit on information, and even sit on it from the Prime Minister, and then hope bad news went away … and not deal with it - I do think that has an impact,” he said.

And now what started out as Parry’s failure to disclose in timely fashion has morphed into something with hints of a cover up by ministers. The opposition has been given another break.

It hardly seemed possible this week could be as bad as last, which saw the Michaelia Cash-AWU debacle and the High Court blow that felled two ministers, triggering a byelection in Joyce’s New England seat. But it has been.

The Parry affair has turbo-charged the pressure for an audit of all MPs’ parliamentary eligibility, with some Liberal MPs jumping on the bandwagon, using it as leverage in the internal Liberal wars.

Kevin Andrews, a political enemy of Turnbull, said on Sky “Australians are looking for strong and decisive leadership,” adding that if he were prime minister, he’d be asking the Australian Electoral Commission to do an audit.

Eric Abetz also backed an audit, declaring in an interview with the ABC “chances are” more dual citizens are in parliament. For good measure, Abetz, though defending Parry, said he’d have advised him to “have thrown his lot in with the other seven”.

The government has dug in against an audit, arguing it would be complex and that it’s up to individuals to check out their citizenship, or for others to bring forward allegations.

Turnbull was typically hyperbolic. “What is an audit?” he asked. “Does that mean that somebody is going to undertake extensive genealogical research on every member of parliament and senator? Undertake extensive research into foreign laws?”

Well, actually the auditor would ask the questions that careful candidates now ask themselves and any experts to whom they may need to turn.

Obviously there’s a real fear in the government that an audit could find more MPs in breach and lead to further byelections, at worst threatening the government and at best causing a shambles. With its back against the wall, it’s been a mercy for the Coalition that Labor – probably also nervous despite having good checking processes - has been (so far) on a unity ticket in opposing an audit.

Adding to the government’s pain this week has been Liberal-National scuffling over who’ll get Parry’s lucrative post, and ugly Liberal in-fighting as conservative enemies of cabinet minister Christopher Pyne, a moderate who is a ferocious factional player, tossed out dirt about him.

The scrapping over the Senate presidency is likely to be resolved in favour of the Liberals, but it highlights the present unhelpful tensions between the Coalition partners. Equally unhelpful is the assault against Pyne, which has a further negative spin off for the South Australian Liberals, already struggling ahead of next year’s state election.

The Turnbull government has become like an plane with its engines stalled, hurtling groundwards, with hopes of re-powering frustrated at every turn.