The remains of the first known Australian, Mungo Man, today begin their return to the Willandra area of New South Wales, where they were discovered in 1974.

They’ll be accompanied by the remains of around 100 other Aboriginal people who lived in the Willandra landscape during the last ice age.

Their modern descendants, the Mutti Mutti, Paakantyi and Ngyampaa people, will receive the ancestral remains, and will ultimately decide their future.

But the hope is that scientists will have some access to the returned remains, which still have much to tell us about the lives of early Aboriginal Australians.

For more than a century, non-Indigenous people have collected the skeletal remains of Aboriginal Australians. This understandably created enormous resentment for many Aboriginal people who objected to the desecration of their gravesites. 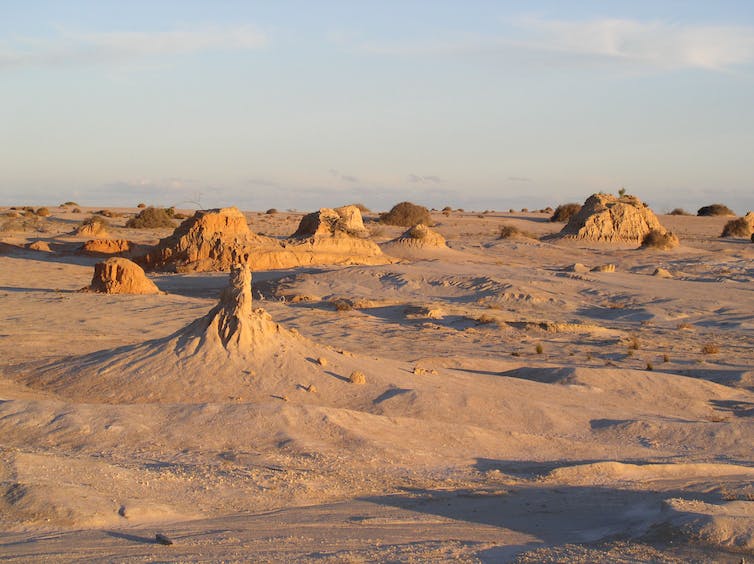 The removal of the remains from the Willandra was quite different, done to prevent the erosion and destruction of fragile human remains but also to make sense of their meaning. In 1967 Mungo Woman’s cremated remains were found buried in a small pit on the shores of Lake Mungo.

Careful excavation by scientists from the Australian National University revealed they were the world’s oldest cremation, dated to some 42,000 years ago.

Several years later, and only several hundred metres from where Mungo Woman was buried, Mungo Man was discovered adorned in ochre that is thought to have been obtained from about 200km away to the north. 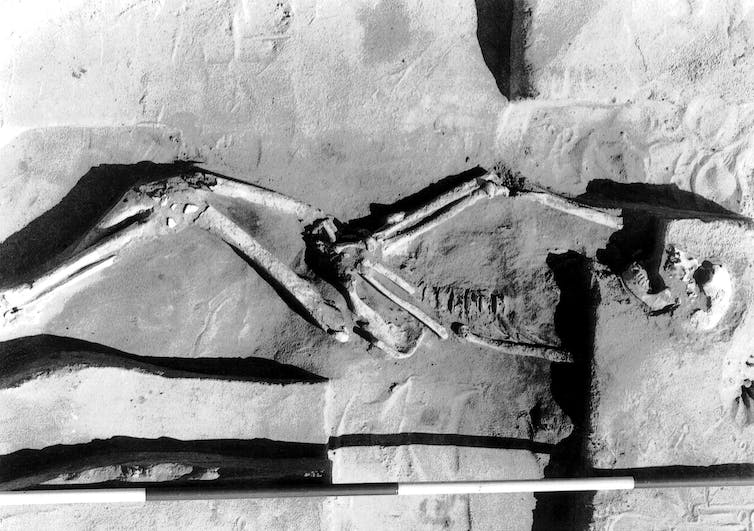 The remains of Mungo Man discovered at Lake Mungo in southwestern NSW. AAP

Mungo Man provided a further glimpse into a past that all of a sudden appeared far more complex than archaeologists across the world had previously thought possible. A picture was emerging that here, at a time when Europe was largely populated by Neanderthals, was an ancient culture of far more sophistication, full of symbolism with a thriving and complex belief system.

The discoveries made possible by the initial research of a young Jim Bowler rewrote our understanding of human history.

Some have argued that 42 years of scientific access to the remains is long enough for research to learn everything we can from the remains.

Limited research on the remains

While it is true that Mungo Man was excavated in 1975 and has been in Canberra ever since, the perception that scientists have been undertaking research on his remains since this time is not accurate.

In reality, very few scientists, probably fewer than ten, have been privileged with the opportunity to study the remains. Very little work has been published, which is unfortunate considering the importance of these remains to human history.

Before 2005 only a few papers from a couple of different authors were published, dealing mainly with dating and comparisons with other fossil human remains. None of these provided an actual description of the skeletal remains of Mungo Man.

Science works best when a variety of perspectives are collected by different scientists working on different questions. Science has not truly had this opportunity with Mungo Man.

We are fortunate to be working at a time when technology allows us to understand ancient human remains in ways that couldn’t have been imagined, even ten years ago. The collection of remains from the Willandra Lakes was CT scanned only four years ago, providing a wealth of new data that can be used to understand those populations.

Much to learn from further research

The study of ancient DNA has finally progressed to the point where we can potentially learn a great deal of information from ancient skeletons.

While DNA from contemporary populations can provide significant information, living people can never replace the information we can recover from people that lived 42,000 years ago.

Isotopes are geochemical signatures that can reveal how people may have moved across the landscape, from one different geological catchment to another. This type of work was recently applied to questions in other parts of Australia, where research revealed the ancient megafauna were probably migratory animals.

Further research may allow us to see how the ancient Australians interacted with the seasonal movement of the great megafauna herds and their migrations who we know now overlaped with people in the Willandra as recently as 32,000 years ago.

Only three of the ancient remains from the Willandra have been reliably dated, and there are more than 100 other skeletons that have no direct age estimates associated with them.

The early dates from Australia’s north raise the possibility that some of the ancient remains recovered from the Willandra system may be older than those of Mungo Man and Woman. This could further rewrite the history of the peopling of Australia.

Who knows what will be possible as science continues to progress? It is impossible to predict what else we may be able to learn from Mungo Man and the other individuals from the Willandra as technology advances.

Will the story continue?

The discovery of Mungo Man and Mungo Woman sent shockwaves through archaeology. Ancient burials with such sophisticated funerary rituals were unexpected in Pleistocene Australia.

The discovery forced a greater appreciation of the culture of the first Australians and was one of the main reasons that the Willandra Lakes area was given World Heritage status in 1981.

Those of us interested in the origins of the First Australians hope that the long overdue repatriation of Mungo Man will not mark the end of scientific work on his remains.

A keeping place at Lake Mungo would allow for scientific work to be done in the future in greater collaboration with the Traditional Owners, while preserving the remains in a culturally appropriate and respectful way.

The story of the people from the ancient Willandra has been told so far by a small handful of white scientists. One day soon there will be Aboriginal scientists who will bring an entirely different approach to studying the past. A keeping place will give future generations the opportunity to seek answers to those questions.

As scientists interested in the study of human remains, we understand and appreciate the sensitivity involved in our work, and strive to treat these remains with the respect and dignity they deserve.

We are glad that Mungo Man will be returning to country, but equally we hope that he and the other 100 ancient people will be allowed to continue to tell the remarkable story of the First Australians.