Australia’s native plants and animals are integral to the success of our society. We depend on wildlife to pollinate many of our crops. Most of our cities depend on effective water catchments to provide clean water. And medical scientists are making important breakthroughs in managing disease and health issues based on discoveries in nature.

The mental health benefits of a “dose of nature” are becoming more widely recognised, on top of our own experiences of having fun and enjoying the natural wonders of national parks. Our nature inspires us in all kinds of ways, and you can build major industries around that; the Great Barrier Reef is reportedly worth A$56 billion to the Australian economy.

It is therefore surprising, on one hand, to read the Australian Conservation Foundation and Wilderness Society budget submission that the Australian government has slashed environmental spending by one third since 2013.

On the other hand, I’m not especially surprised because we ecologists have been living through the ongoing attack on the environment every day. We see how cuts to environmental budgets play out.

Read more: Why a walk in the woods really does help your body and your soul

Our native species and ecosystems are under growing pressure. Australia’s 1.6% annual population growth outstrips many other countries. This is compounded by rises in per-capita consumption and greenhouse emissions.

Escalating consumption translates into growing impacts on biodiversity as more land is released for housing and infrastructure, extractive industries such as mining, recreational and industrial fishing expand and agriculture intensifies.

Climate change further interacts with land clearing associated with producing more for a growing and greedier population. Many species are expected to have to shift their range as the environmental conditions they live in move, and if they can’t move because there is no habitat to move through, extinctions will result.

State of the Environment reports document the extent of the problem.

Given the extraordinary value of biodiversity and the extreme and growing threats, it would make sense to maximise our spending on biodiversity conservation now, to protect our wildlife through this period of peak human.

Key areas for investment include creating an effective national reserve system, at least meeting the arbitrary international goals of 17% of the land and 10% of the sea area.

Funding is needed to manage the reserve system, containing threats and nurturing already threatened species. Meanwhile, outside of reserves where most of the people live and interact with nature, biodiversity needs to be provided for, and threats need to be managed. Biosecurity is a critical area for funding, particularly to more tightly regulate rogue industries, like horticulture.

Horticulture was recently responsible for introducing myrtle rust, a disease that is devastating many gum-tree relatives, in the family Myrtaceae. Finally, climate change demands a strong response, both in mitigation and adaptation.

I’ve never seen so many fantastic, skilled, enthusiastic young ecologists struggling to get a job. At a time when ecologists and conservation scientists are needed more than ever to help solve the problems created by the growth economy, funding for ecology is at a low.

Of course, beyond the people, we see conservation programs in desperate need of support that just isn’t forthcoming. Christmas Island is a case in point.

The island’s reptiles have been devastated by invasive pests, most likely the wolf snake and perhaps the giant centipede. Two endemic species (species that only lived on Christmas Island) are presumed extinct; the last known forest skink died in 2014. 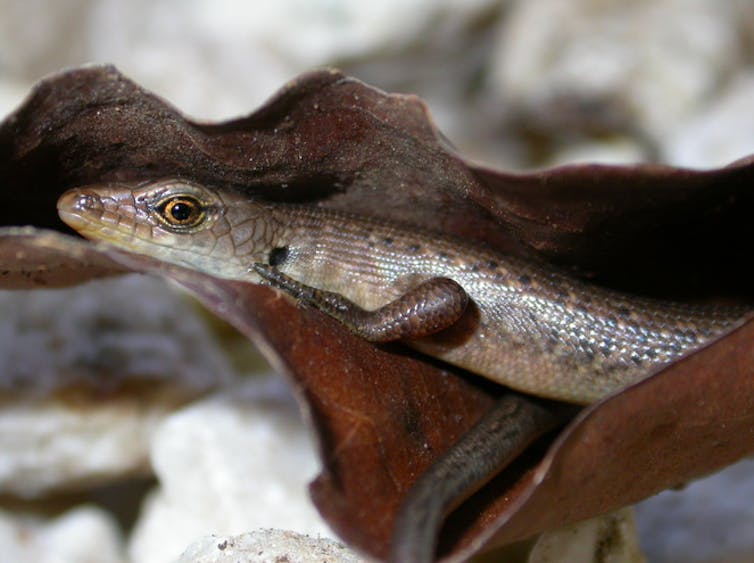 This Christmas Island Forest Skink was the last known member of her species. Director of National Parks/Supplied

Two other endemic species are extinct in the wild, but small populations of around 1,000 animals are kept in captivity on the island and at Taronga Zoo.

While ideally a population of at least 5,000 would be maintained to minimise loss of genetic diversity, funding is not available to house that many animals. And it’s rock-bottom budget accommodation; Lister’s geckos are housed in tents because the budget doesn’t stretch to building something permanent.

We’ve also seen important long term research programs defunded. Long-term data provides crucial insights into how our biodiversity responds to decadal changes in weather patterns as well as longer-term changes caused by the greenhouse effect. It is unimaginable that the government have slashed the Terrestrial Ecosystem Research Network’s funding so far that well-established long-term data series are now being compromised.

Ultimately, the environmental funding shortfall needs to be fixed. Our livelihoods and well-being depend on it.