What comes to mind when you think of the word “convivial”? Likely, images of happiness, freedom, relaxation and ease: people interacting pleasantly without constraint or conflict.

The idea of conviviality isn’t simply a lack of negative attributes; it actively includes positive elements too.

Keeping this in mind, we want to ask what a convivial city might look like. Answering this might appear deceptively simple: a city that is safe, friendly and open. Negative attributes, such as crime, segregation and coercion, would be absent, while the convivial city would display positive attributes such as inclusivity, mutual respect and perhaps playfulness.

Read more: What actually is a good city?

However, these simple answers give rise to other questions. What is meant by “safety” and how do we achieve it? Are there limits to a city’s friendliness? And is the openness of the city universal, or are there conditions attached?

Demonstrably, when thinking about convivial cities, more complex questions come into play. These include questions about accessibility, who is included (or not), and how open we are willing to be.

Why focus on conviviality?

The academic literature on the idea of conviviality is growing, particularly in relation to cities. This work usually considers urban spaces and questions of design, liveability, diversity and multiculturalism.

Originally conceived by Croatian-Austrian philosopher Ivan Illich, conviviality is imagined as a means for achieving a better society. This goal is to be achieved through inclusion and the radical socialisation of knowledge, skills, technology and social power.

The idea is that these can then be used for the benefit of all (rather than any one group monopolising, say, the benefits of technology).

At the core of Illich’s concept of the “good society” – to which conviviality is expected to lead – is an ethics of radical inclusion. That is, conviviality is not selective: it is a rising tide that lifts all boats.

For example, in a convivial city, urban design, security, surveillance systems (for example, CCTV) and policy would be used for the benefit of all.

Read more: The ethical city: an idea whose time has come

Unfortunately, research shows the benefits of these things are not evenly distributed. In fact, they often operate to the detriment of members of marginalised groups, such as people who are homeless or have a mental illness.

How convivial are Australian cities?

While city councils might not use the term themselves, they certainly promote themselves as convivial places. And they spend a lot of time, energy and resources doing so.

For example, the City of Melbourne’s safe city strategy is titled Beyond the Safe City. The logic here is that it is not enough just to be safe; Melbourne must be open, welcoming, vibrant and so on.

We can certainly see aspects of conviviality in Australian cities. Compared to many other cities around the world, relatively good public transport, minimal ghettoisation, low rates of violent crime and accessible parkland (like Adelaide’s green ring) are all things that promote conviviality.

In Melbourne, the vibrant cultural scene – exemplified by accessible public art and events like White Night and the Gertrude Street Projection Festival – are quintessential examples of conviviality. 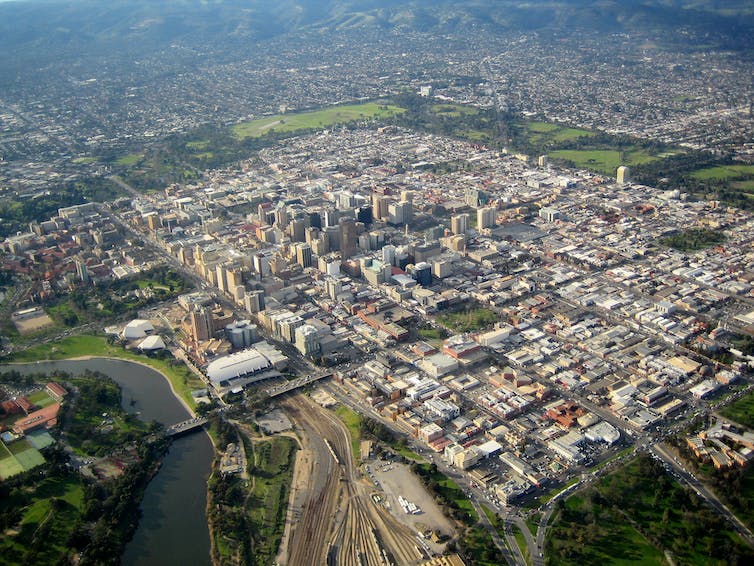 A planned legacy of accessible parkland, the green ring around Adelaide is a key element of its conviviality. Doug Barber/flickr, CC BY-SA

However, if we remember the radically inclusive ethic at the core of conviviality, we can also identify things in our cities that detract from their conviviality. These include low housing affordability, repressive regulation of groups such as the homeless, degraded and/or neglected public housing estates, and a decline in public amenities such as toilets, drinking fountains and freely accessible seating.

What is more, cities often promote themselves as convivial by trying to remove or hide things that they regard as disorderly or aesthetically displeasing. Both the Cities of Melbourne and Sydney have recently made considerable efforts to remove homeless people from public spaces or strictly regulate them.

While visible homelessness might not initially come to mind when we think of conviviality, within Illich’s perspective homeless people are members of the community. Therefore they are equally entitled to public space and its amenities.

Read more: Ban on sleeping rough does nothing to fix the problems of homelessness

A convivial city – one that supports an inclusive and hospitable urban life – extends its welcome to all, not just to some. When imagining a convivial city, rather than picturing a city without the homeless (or other disadvantaged communities), we should imagine one in which homeless people are included in all facets of the social life that the city and its spaces sustain.

This kind of inclusion has the potential to reduce the marginalisation those groups experience. That in turn would lessen the challenges that they both pose for social order and are themselves forced to endure.