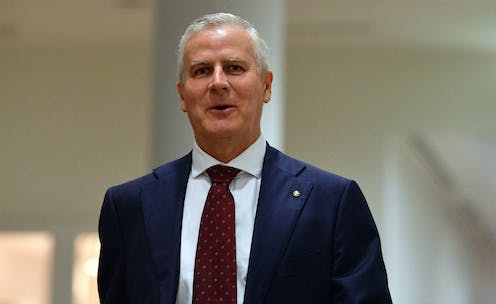 Michael McCormack is the new Nationals leader and deputy prime minister, defeating Queensland maverick George Christensen, who was a late and unexpected starter in the leadership ballot.

McCormack, speaking after the party meeting, paid immediate tribute to Barnaby Joyce, saying he had been an “outstanding leader” whose “legacy will endure”.

The new Nationals leader went into immediate talks with Prime Minister Malcolm Turnbull, who’d returned from his US trip only hours before.

There will be a limited reshuffle, with the key decision being who occupies the key infrastructure and transport portfolio that Joyce had. There will also be interest in whether Victorian Darren Chester, dropped from cabinet last year by Joyce, is returned to the frontbench.

McCormack, 53, a former journalist, who is member for the New South Wales seat of Riverina, entered parliament in 2010. Most recently he has held the ministerial jobs of veterans affairs and minister for defence personnel. He is a former minister for small business.

His challenges will be to unite his party behind him, make himself widely known among rural and regional voters, forge a strong relationship with Turnbull, and establish his authority more generally within the government. He will also have to try minimise any disruption that having Joyce on the backbench may cause, as well as keep the perennially difficult Christensen under as much control as possible.

The challenge by Christensen, who at the weekend questioned the value of the Nationals being in coalition, was a token one. The numbers in the vote were not announced, and even the contenders said they didn’t know them.

A more serious potential contender, David Littleproud, from Queensland, pulled out late on Sunday night, under pressure for a consensus result.

Party whip Michelle Landry told reporters that in the partyroom Christensen had talked about the National Party’s values and what it had done for regional Australia.

In his comments after the meeting, McCormack emphasised he was a “team player”. He also said that while the National Party was a party of farmers, it was broader than that – with its MPs coming from many different backgrounds.

McCormack has taken Joyce’s portfolio of infrastructure and transport, and has been sworn into his new ministry and as deputy prime minister at Government House.