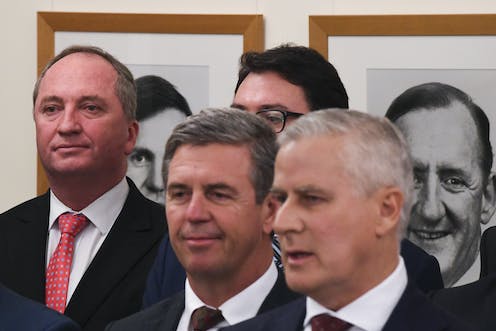 The demise of Barnaby Joyce as leader of the National Party is an event of considerable importance in the long-term trajectory of Australian politics.

While his successor, New South Wales MP Michael McCormack, appears to have good conservative credentials, he is largely unknown to the Australian public, having held relatively minor ministerial portfolios such as Veterans’ Affairs.

Joyce was the last high-profile conservative leader left in mainstream Australian political life. With his banishment to the backbenches, it would appear that the triumph of left liberalism in Australian public life has been complete.

Read more: Barnaby Joyce: the story of an unlikely rise and a self-inflicted fall

This needs to be explained a little further. There was a time when the Australian Labor Party espoused a mixture of what it called “socialism”, or social justice, and conservative social values. In part, this reflected the strength of the Catholic Right in the party. Those days are now gone, as can be seen in the way that the party so enthusiastically embraced marriage equality.

John Howard once famously described the Liberal Party in terms of liberalism and social conservatism. However, recent events would seem to indicate the continued ascendancy of the moderate, or social liberal, faction within the party. Like Barnaby Joyce, Tony Abbott sits on the backbench, hurling the occasional hand grenade at the moderate hegemony.

Two possible conclusions could be drawn from these developments. One is that the Australian population is increasingly adopting left liberal values; the postal survey on marriage equality could be cited as evidence, as even many National Party electorates voted in favour. A counter argument could be mounted that the political class has moved in a left liberal direction, even if the people they represent have not.

Even if left liberalism has become more dominant, this does not mean it has been universally embraced. Many Australians still adhere to more traditional values and do not want their voices to be silenced by what threatens to be a left liberal hegemony.

Of course, the primary role of the National Party is to represent the interests of rural Australia, which it has been doing for some 100 years. The only problem is that, during that time, rural Australia has become an ever-decreasing part of the Australian population. In 1922, when the then Country Party first entered into a coalition with the then Nationalist Party, it won 12.56% of the vote in the House of Representatives and held 14 seats in a 75-seat Parliament.

In 2016, the Nationals hold 16 seats in a 150-seat House of Representatives. The outlook is even gloomier, as the increased immigration of recent years has largely gone to the large cities. The number of National Party members can only decline over time. The rural voice will be heard less and less.

One option for the Nationals would be to merge with the Liberal Party. This has been tried in Queensland, where it seems to have benefited the Liberals while failing at last year’s state election to deliver government to the Liberal Nationals.

The trajectory of Australian social development means that rural Australia is forever doomed to minority status. One consequence of this development is that those holding conservative values are also condemned to being in a minority. One can only say that this is a very difficult situation.

One solution would be to embrace the dominant left liberal ideology. This, however, raises significant problems, as the Nationals represent a constituency that remains quite traditional in its values. The more liberal it becomes, the more open it also becomes to having its constituency stolen by parties espousing more traditional values, such as Pauline Hanson’s One Nation.

Read more: Welcome to the new (old) moralism: how the media's coverage of the Joyce affair harks back to the 1950s

In such circumstances, the situation of those who are either conservative and/or rural becomes increasingly difficult. Their values and outlook will often be at odds with the majority, and their chances of prevailing on any major issue are not great.

The same is true for the National Party. It must recognise that it is a minority and that its constituency can only get smaller over time. This does not mean that it should embrace the left liberal hegemony. If it were to do so it would only risk being displaced by a competitor.

Rather, it needs to embrace its minority status, establish clearly what it stands for, and recognise that perhaps the best it can do is soften the harshness that the tyranny of the majority might seek to impose. It would be foolish to rush into the arms of the Liberal Party and suffer what conservatives within the Liberal Party have suffered at the hands of the moderates.

Independence has long been a primary virtue of rural Australians. It is a value they should continue to embrace. For all his faults, Barnaby Joyce was an embodiment of that spirit of rural independence. Judging by his background, McCormack is cut from similar cloth. It remains to be seen how he will portray himself to the Australian public.