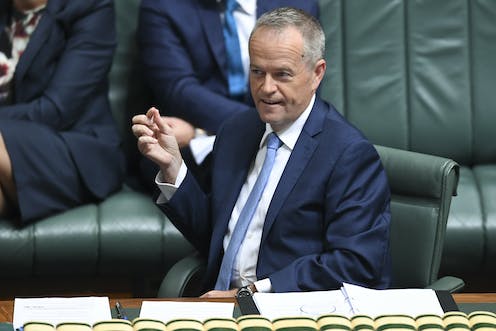 Successful politicians need fortune to smile on them – to be “hit in the arse by a rainbow”, as Paul Keating said of Peter Costello. If this is so, federal Labor leader Bill Shorten’s backside must by now be glowing brightly with all the colours and shades of the spectrum, from red and orange through to indigo and violet.

First, there was Kevin Rudd’s parting gift to the Labor Party: the changes in 2013 to the way Labor leaders are elected. These changes have provided Shorten – and indeed any future Labor leader – with impressive insulation against an internal challenge.

It’s perhaps a modest claim to fame, but Shorten is the longest-serving Labor leader since Kim Beazley in his first stint in office (1996 to 2001).

Shorten’s luck didn’t end there. The Abbott government turned out to be one of the most accident-prone in our history. Episodes such as the 2014 budget debacle are a once-in-a-generation political gift, the knighthood saga a once-in-a-century job.

Even a royal commission into trade union corruption – seemingly designed by the government to damage Shorten – backfired after the commissioner, Dyson Heydon, accepted an invitation to speak at a Liberal Party fundraiser. That revelation landed on Shorten, who had made an uncomfortable appearance before the inquiry, like manna from heaven. Heydon’s eventual report had all the impact of last year’s telephone book being dumped in a wheelie-bin.

Malcolm Turnbull’s coup against Tony Abbott raised expectations that a more “progressive” prime minister would move the Coalition closer to the centre of Australian politics. Such hopes were almost immediately dashed, with a refreshed Coalition agreement strengthening the more conservative National Party.

The government’s poor performance at the 2016 election – and Turnbull’s subsequent loss of authority – eliminated any possibility of a more centrist Coalition. This was yet more good fortune for Shorten.

It would be hard to argue that Shorten quite deserves so much luck but in politics, deserts don’t count for a hill of beans. Turnbull and the Coalition appear to be in two minds about what to do with the Labor leader. Sometimes, in their telling, he is a “social-climbing sycophant” with a habit of sucking up to the rich and powerful.

When Turnbull is in this mode, there is a clear subtext: that if I were not here as prime minister, Bill would be sucking up to rich and successful people like me. It’s hard to imagine this goes down especially well with most voters, who don’t mind people becoming rich and successful but dislike those who boast about it.

But Turnbull also told a Liberal audience in August last year that Shorten is “the most dangerous left-wing leader of the Labor Party we have seen in generations”.

More recently, Finance Minister Mathias Cormann accused Shorten of plagiarising the “socialist, populist playbook” of British Labour leader Jeremy Corbyn. And Turnbull railed against “the most anti-business, the most anti-investment, the most anti-jobs policy of any Labor leader since Whitlam”.

These claims are about pushing the government’s stalled company tax cuts, a key issue that will divide the parties at the next election. But Turnbull and the Coalition have a hard sell, and it will take more than a letter of complaint to ABC management and a bit of PR work with Donald Trump to get voters – and crossbench senators – around to their way of thinking.

The prosaic reality about Shorten, however, is that he is in many ways a garden-variety centre-left leader.

This species has become endangered – in some countries, virtually extinct – in the aftermath of the global financial crisis. But Australia is different. It was touched more lightly by the crisis than most other western economies. And partly for that reason, it has not experienced populist explosions of either left or right.

Pauline Hanson is small beer compared with Trump or France’s Marine Le Pen; the Greens will not emulate successful left-populist parties such as Greece’s Syriza or Spain’s Podemos; and there are no Jeremy Corbyns lurking in the Labor caucus room.

Without such pressures, Labor has been able to craft its policies in a much more relaxed environment than many European social democratic and labour parties. Shorten goes through the motions of praising the Hawke-Keating reform model, but he is sufficiently in tune with the times to know that this will only get him so far.

Such gestures are becoming a little like the way Chinese capitalists praise Chairman Mao: it’s diplomatic but also increasingly irrelevant.

Labor under Shorten makes an issue of inequality without hammering it home in the more forthright manner of the left-wing political forces that are transforming British and European politics.

And while the ALP has made plenty of gestures to the populist right over issues such as refugees, that has been a gradual capitulation to the centre-right in the context of two-party competition rather than, as in the case of some European countries, a panicky attempt to stop a right-wing populist party from stealing its working-class base.

Now that the Barnaby Joyce affair is losing steam, there will be a return to the more normal pattern of party contestation, at least until the government’s next own-goal. In the meantime, the contest between Turnbull and Shorten, like that between Abbott and Shorten before it, will be largely one between two unpopular leaders, performed for an electorate which, while less shaken by the times than many overseas, is becoming measurably ever more stroppy.

Dealing with that problem and its electoral consequences has become the central issue of Australian politics, whoever wins the next election.