Going Down is a vibrant, layered comic exploration of stereotypes, from piccolo-quaffing urban Melbournites to migrant memoirists from ethnic minorities.

The plot follows Hmong-Australian writer Natalie Yang (played with delightfully energetic bombast by Catherine Davies) over a long weekend, in the come-down from the success of her first novel, Banana Girl, as she is consumed by rivalry with another Asian-Australian writer, Lulu Jayadi.

The parallels to playwright Michele Lee’s own life are hardly veiled: Lee is a Hmong-Australian writer, whose debut novel, Banana Girl, shares the same cover photograph and the same back cover blurb: “Sexy, irreverent and nuanced, Lee isn’t afraid to lay herself and her relationships bare”.

As Lee acknowledges in the program, “Banana Girl has a lot of sexual content, which reflected a particular phase in my life”. Determining just how autobiographical this story is adds to the intrigue of this production. Lee has written a devastating caricature of herself and she serves as the butt of many of the finest jokes in this play. But as with all “confessional” works, one must be careful not to be sucked in by autobiographical over-determination. Yang is not Lee. The reductive comic caricature needs to be understood within the larger context of this play as one of many stereotypes being explored.

As the plot zooms along, directed with a singular clarity by Leticia Cácares, we are introduced to a veritable smorgasbord of Melbourne clichés: wearing Gorman or Marimekko, taking pride in the shelf-space in Brunswick Bound bookstore next to the Moleskine display, the northern tribe to which Natalie belongs is strictly defined by Bell Street and the Yarra River.

Natalie and her friends (one runs a non-profit, the other works with her at a local council) consume a variety of beverages from a swag of bartenders and baristas, most of whom are played by a suitably bearded Josh Price. The play in fact seems to be structured around drinks, which accompany, if not induce most of the significant plot points. The set, by the Sisters Hayes (who also did costumes), is a slick construction of angular wood and steel that enhances, enables and extends the humour, complete with hole-in-the-wall cafe and a roll-away bed. It packs Melbourne in a nutshell. 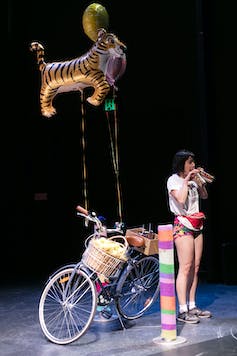 We see all this as we follow Yang over the weekend, going down on both a series of unsuspecting men and into an emotional spiral, as the pun in the title suggests, and struggling to come to grips with her voice as a writer. Her rival, Lulu Jayadi, infuriates her. An Indonesian refugee, who wears a headscarf to please her father and whose tiny grandmother is always in the background, Jayadi writes more recognisably ethnic migrant stories. And they sell. Jayadi speaks to sold out audiences at the Wheeler Centre and wins the Miles Franklin (and a marathon, for good measure).

It is tempting to dismiss these characters as two-dimensional, but to do so would miss the point. Rather, Lee serves up these clichés to engage with the way they produce expectations. Which brings us to the issue at the heart of this play: the expectations placed on writers with migrant backgrounds. Do Australian audiences expect them to perform their ethnicity, producing artefacts of otherness for general consumption? What motivates this demand? And should it be catered for?

It is on these lines the play finds its resolution, with both writers beginning to negotiate their way out of such cages. They never fully leave behind the stereotypes, but are able to recognise and see past them. In the touching final scenes, Natalie finally begins to come to terms with her own heritage, coming back to her mother, and with fresh eyes, realising her own misplaced assumptions.

While one could quite simply enjoy Going Down for the joyous blend of its wit and slapstick, don’t be mistaken – there is depth behind the pom-pom earrings and yarn-bombed bollards. While the play is narrowcast for a very Melbourne-centric audience, there is something apt in this specificity, as it is the details that matter.

Despite the self deprecating reference to being like Christos Tsiolkas, “except less souvlaki, more sticky rice”, Lee shows herself to have a keen eye, a wicked sense of humour, and a willingness to take the piss out of herself. It’s a voice that is distinctly Australian, while working simultaneously to complicate just what it means to be a contemporary Australian.

Going Down will be showing at the Malthouse Theatre until June 3.