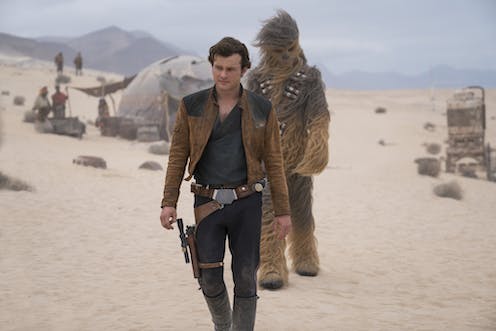 Solo: A Star Wars Story is the first in the new line of Star Wars films and revolves around one of the most lovable characters in the films, the (young) Han Solo, played by Alden Ehrenreich.

Just as the new Spiderman movie took a step back from the typically epic, universe-wide scope of other recent...

Solo: A Star Wars Story is the first in the new line of Star Wars films and revolves around one of the most lovable characters in the films, the (young) Han Solo, played by Alden Ehrenreich.

Just as the new Spiderman movie took a step back from the typically epic, universe-wide scope of other recent movies, Solo is a smaller, more personal story of Han and how he met his new friends Lando Calrissian (Donald Glover), Chewbacca (Joonas Suotamo), Qi'ra (Emelia Clarke), Beckett (Woody Harrelson), and many others.

The movie is a lot of fun and a bit of an indulgence for lifelong Star Wars fans, with a couple of darker elements, reminding me a lot of the original film series in tone.

Read more: What the robots of Star Wars tell us about automation, and the future of human work

We’re under special instructions to keep pre-release reviews as spoiler-free as possible. But being set in the Star Wars universe, there’s plenty of science that has bugged fans for decades we can get stuck into without revealing any major plot points.

Can’t shoot to save themselves

The Star Wars films are notorious for the wild variations in shooting accuracy, especially by the baddies, and this has spurned much debate and discussion already.

But there are a few scientific reasons why shooting performance may sometimes not be up to the standards we expect from action-packed movies.

Bad shooting is essential for the longevity of heroes. Lucasfilm.

The ray guns or blasters in Star Wars shoot some sort of energised beam. Unlike a normal beam of light, these beams have relatively low velocities: in fact even lower than a typical bullet that you’ve seen in movies set on Earth with normal guns. 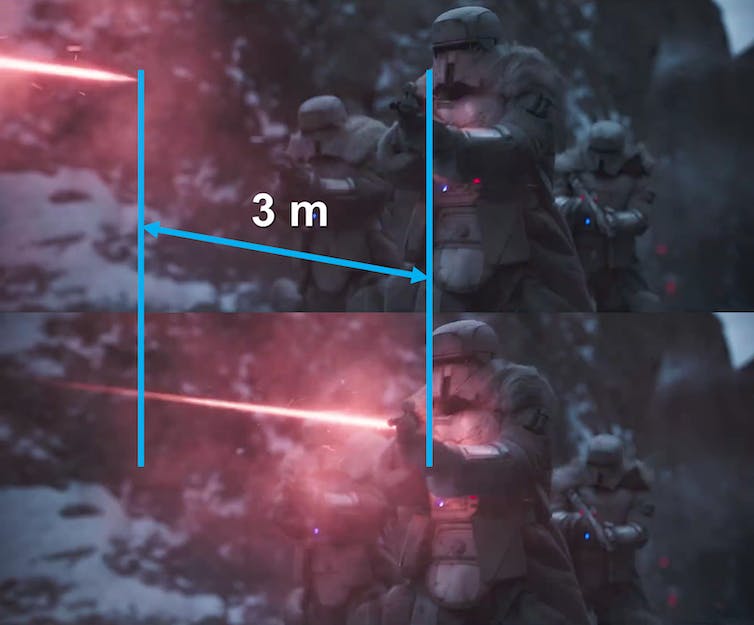 A slow moving beam from a ray gun. Lucasfilm

Now that’s very slow. In comparison, the Australian Army’s standard F88 Austeyr combat weapon fires a bullet with a muzzle velocity of about 930m/s - more than 12 times as fast.

When the target is moving erratically, as is often the case in the movies, the slow travel time of the beam means the target is more likely to move out of the danger zone before the beam gets there.

The ray guns also generally shoot at a remarkably slow rate: about three rounds a second, or 180rpm - again, much slower than the F88 weapon’s 680-850rpm.

So together, the low rate of fire and slow travel time of the beam means it’s not that surprising that, at times, the shooting is remarkably ineffective - which is just as well for the heroes of the story.

The original Star Wars (1977) film ignited a furious 40-year debate over whether Han Solo shot first in a showdown with the bounty hunter Greedo (who also gets off a shot). This debate will no doubt arise again with what happens in Solo.

If you shoot first with a normal gun, you’re likely to get the upper hand because your opponent is unlikely to be able to react before being hit. But what about with a low-velocity ray gun?

Using a reaction speed of 131ms, we can work out how far apart a duelist would need to be to react to the other shooting first:

So if you’re closer than 9.4m there is a good chance your opponent will get hit by your beam before they can react. Any further apart than that, shooting first is less of an advantage.

A key plot device in the movie is a powerful but unstable fuel called coaxium. It has a tendency to go boom if it’s not stored nice and cool.

But is this sort of energy density even possible?

We can use the apparent size of the fireball (a radius of about 200 metres) to work out the explosive yield, and hence the energy storage of a single train carriage-load of fuel that explodes in the movie.

This fireball radius matches a yield of early atomic weapons - about 20 kilotonnes, or 20,000 tonnes of TNT.

It’s clear that there’s not this much material in the train carriage - so the fuel source must be something with a releasable energy density in the ballpark of enriched uranium, more like an actual fission or fusion bomb.

Maybe they’ve come up with a more controlled version of Project Orion, which exploded atomic bombs to propel a spacecraft.

I’ll be there in 12 parsecs… Lucasfilm

In one of the more infamous moments in Star Wars history, Hans Solo claims that the Millennium Falcon made the Kessel Run in less than 12 parsecs.

The first, overquoted bit of trivia in response to this is that this scene is “wrong” because a parsec is a unit of distance, not time. One parsec is about 3.26 light years or 30 trillion kilometres.

But it’s quite possible that Solo is describing a more direct route for the Kessel Run, and hence the distance description is appropriate. Rather than take a longer circuitous route, his daring and navigation skills enable him to take the Falcon on a more direct path - hence Solo means distance rather than time in his claim.

That still leaves some potential problems with time travel, as covered in theories including one that suggests that the Kessel Run turned Hans Solo into a time traveller.

Hover cars feature in the film, which may be a stepping stone towards full flying cars. They’re in many ways more plausible because they sidestep some of the fundamental problems facing full flying cars.

When a hover car fails, it will only fall half a metre to the ground (much safer) and rather than spending significant energy sustaining flight, they may benefit from future technologies that enable sustained elevation above the ground without excessive energy expenditure.

Verdict: Very plausible within the technology of a Star Wars universe, and in the near future for ours.

Read more: My robot Valentine: could you fall in love with a robot?

The film also explores in depth a theme of an affectionate, perhaps even tender romantic relationship between a robot and a human - something that perhaps seems not so far away in the distant future with recent developments in robotics and artificial intelligence.

Scientifically, many of the other scenarios present in the film are plausible, given a healthy dose of future (or strictly speaking past) technology from another galaxy.

In fact, the film is probably the most “technology-filled” film of the series, with no mention of The Force or other mystical themes from Star Wars.