Recent photographs and video from the devastating eruption of Fuego volcano in Guatemala show people stood watching and filming hot, cloud-like flows of gas, ash and volcanic material (known as pyroclastic flows) travelling towards them down the slopes of the volcano.

From this it is clear that some people do not fully understand the risks of the volcanoes they live near.

Although each volcano is different, and each presents different risks to the people near to them, there are some generalisations that help us understand what these risks are likely to be.

Three points are clear: location matters, explosiveness can be predicted to an extent, and fast-moving pyroclastic flows of volcanic material are deadly.

The outer layer of the Earth, called the lithosphere (crust and upper mantle), is broken up into a number of rigid tectonic plates. Volcanoes typically occur where the plates move apart from one another, for example at underwater mid-ocean ridges, or collide together at subduction zones. 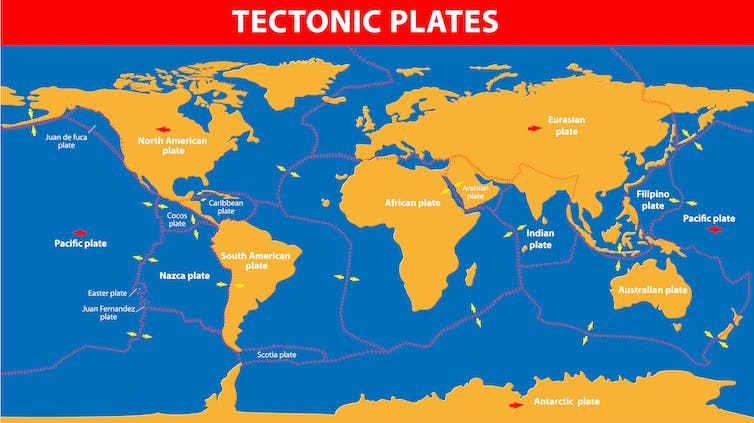 Australia sits in the middle of a tectonic plate - whereas New Zealand sits on a boundary between two tectonic plates. CLICK ON IMAGE TO ZOOM from www.shutterstock.com

We also find volcanoes in the middle of tectonic plates – these are called “intraplate” volcanoes, such as the Hawaiian and Galápagos oceanic islands.

The magma (molten rock) that feeds volcanoes is generated in different ways in these settings, and different volcanic landforms result.

Hawaii is in the middle of a tectonic plate and volcanic activity there forms relatively low-profile, shield volcanoes. Typically, these volcanoes are built up by many fluid lava flows into broad, gently sloping domes, which resemble a warrior’s shield.

In contrast, Fuego is situated in a subduction zone environment (one plate going under another) where steep-sided, stratovolcanoes, or composite volcanoes are most common. These often symmetrical, conical volcanoes form from the build up of layers of lava and pyroclastic (fragmented volcanic) rocks.

The volcanic landforms and eruptive styles we see in different settings are largely a result of the differences in the composition of the magma (molten rock) erupted, its temperature and its gas content in these contrasting tectonic settings.

Large shield volcanoes in the middle of tectonic plates, such as Kilauea volcano in Hawaii, erupts high temperature, low silica lava. This is runnier (less viscous) than magma typically erupted at subduction zone volcanoes (like Fuego).

Read more: Eruptions and lava flows on Kilauea: but what's going on beneath Hawai'i's volcano?

This means that any volatiles (dissolved gases such as water, carbon dioxide and sulphur dioxide) in the Kilauea magma are able to escape more easily compared to in a stickier, higher silica, magma that characterises subduction zone volcanoes.

And so “Hawaiian-style” eruptions are characterised by lava fountaining and flows of hot fluid lava that normally travel slow enough for people to walk away from and evacuate. This is exactly what we have been seeing over the last month in Kilauea’s East Rift Zone.

In contrast, at subduction zone volcanoes – such as Fuego – the higher water content of the magma and the typically more silica-rich, sticky magmas erupt more explosively. It is harder for gas bubbles formed to escape as magma rises to the surface, which then take up more space and over pressure the system.

Subduction zone volcanoes can produce high columns of gas and ash reaching tens of kilometres into the atmosphere, and scolding hot, fast-moving, cloud-like currents of gas, ash and volcanic material. These pyroclastic flows, or “pyroclastic density currents”, race down the volcano at speeds over 80 km/hr.

Some news reports of eruptions at Fuego have incorrectly termed these pyroclastic flows “rivers of lava”. They are very different to lava flows and much more hazardous.

Clear and accurate communication of volcanic eruptions is crucial if those near the volcano are to understand the real risks.

Pyroclastic flows are extremely hazardous and deadly. They were responsible for deaths in Pompeii and Herculaneum from the AD79 eruption of Vesuvius in Italy. 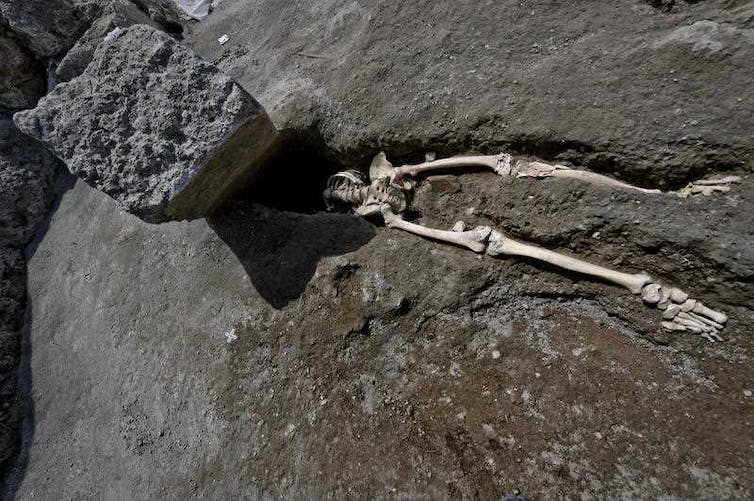 The skeleton of a victim of the eruption that destroyed Pompeii discovered during excavations in May 2018 - this man was probably hit by a rock as he tried to escape. Ciro Fusco/AAP

Even the famous volcanologists Katia and Maurice Kraft underestimated the reach of a pyroclastic flow during an eruption at Unzen volcano on June 3, 1991, which killed them along with many others.

Read more: Curious Kids: Do most volcanologists die from getting too close to volcanoes?

At Fuego, the loose, fragmented volcanic material (known as tephra) lying on the slopes after eruptions may be remobilised by rain to form volcanic mudflows known as lahars. These pose a significant current and future risk for the people surrounding Fuego compared to those living in Hawaii.

While eyes are diverted toward eruptions in Central America and the Pacific Ocean, Indonesia has raised the alert level on some of its volcanoes this week. It now has 21 volcanoes on alert levels 2-4 (yellow, orange and red) on a scale of 1-4.

Local authorities will be vital in managing and communicating the risks of these volcanoes, as well as around Fuego and Kilauea.