Set on an isolated stretch of beach in Italy’s south, Matteo Garrone’s Dogman is a grim and often bloody tale of dog-groomer Marcello (Marcello Fonte) whose foray into petty crime spirals into a violent crusade for retribution.

The plot sags in places, propped up in part by sharp cinematography and by Fonte’s charismatic performance. The film’s tone shifts from near-slapstick gangster-comedy to a violent and grim drama, with unsettling effects. Though I can appreciate the narrative’s derisive portrait of masculinity and criminality, I found myself wanting more – specifically, more from the dogs who trot in and out of the film stealing every scene that they are in.

Dogman opens with a brief and charming sequence in which Marcello attempts to bathe a large and aggressive dog that looks like a cross between a Cane Corso and a Pitbull. Hackles raised and teeth bared, the dog snarls and bites at Marcello, who responds lovingly in his attempt to wash the dog with a sponge that is attached to the end of a broom. Each attempt by Marcello to touch the dog from a broom’s distance was met with hearty chortles from the audience. The scene is played for laughs and sets a comedic tone for the film which is slowly disrupted until no one is able to laugh.

The effect is unsettling, such that by the end, I found myself wishing this quiet and bumbling man could have found himself back in that opening gambit, wrestling with an unhappy dog rather than with the weighty consequences of his actions. 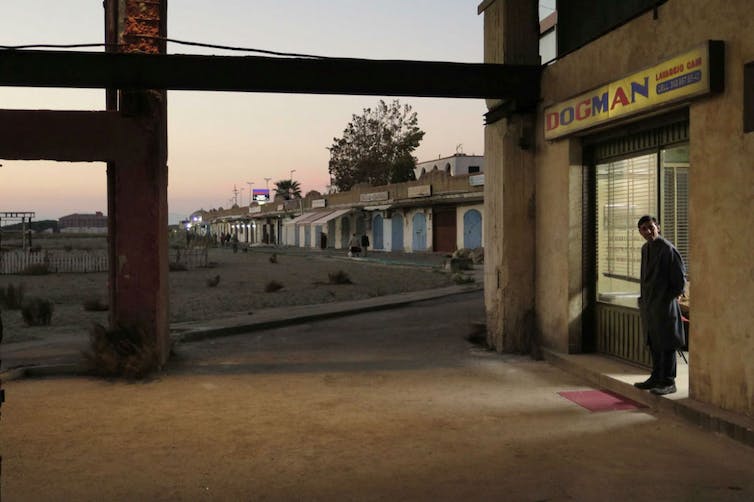 Garrone captures Marcello’s grim and isolated plight by framing him against the derelict boardwalk, the row of run-down shopfronts, and the sparse and desolate landscape. The film is awash in a grey-hued light, adding to the shifting tone as Marcello descends into criminality. Further, the frequent outbursts of violence are edited to feel like a slap in the face, jolting me such that as the tension of the third act built, I caught myself gripping the armrest of my seat. 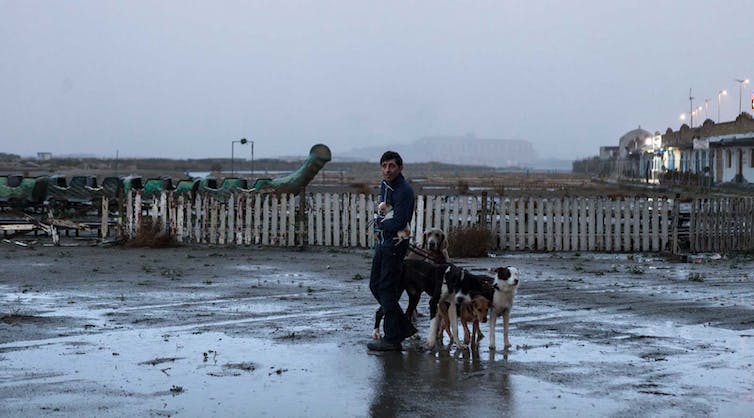 Fonte’s performance is utterly endearing. It is unsurprising that he took the Best Actor award at this year’s Cannes Film Festival. Indeed, much of the film’s charm comes from his nuanced caricature of the awkward, sometimes simpering dog-groomer.

Particularly endearing is the gentle way in which he tends to the dogs in his grooming parlour, cooing loving nicknames – “mio amore”, “dolcezza” – to sooth the dogs. He is a simple man. He wants to be liked by his neighbours, he loves his daughter, he wants to keep his business afloat, and he has a penchant for cocaine.

This penchant is shared by the local gangster, Simoncino (Edoardo Pesce) who terrorises the small town and embroils Marcello in a series of criminal activities. Pesce gives a compellingly brutish performance as the thickset and seemingly invincible thug. He is a mountain of a man, highly volatile, an immovable presence, and deaf to anyone who asks anything of him.

The dynamic between the two men sets up an alpha/beta duality. Archimede, Le Pacte, Rai Cinema

The dynamic between the two men sets up an alpha/beta duality, casting Marcello as the grovelling lapdog and Simoncino as the rabid mongrel who, it is suggested early in the film, needs to be put down.

But, the real stars of this film are its dogs. Each canine cameo is equal parts charming and disarming. In the opening act the dogs are played for laughs: a Great Dane is displeased by his pedicure; a Poodle’s fringe is whipped up into an award-winning quiff; a Chihuahua is resuscitated after a stint in a freezer; and, disinterested in his kibble, Marcello’s dog steals bites of pasta off his fork when Marcello is distracted. Though I was captivated by the tense unravelling of Marcello and Simoncino’s lives, I have to admit that I wanted more charismatic canines and less toxic masculinity.

Dogman is screening as part of the Melbourne International Film Festival.