In June 1849, a military formation charged through the streets of Paris. Mounted guns rumbled past, horses shied and pawed the ground – and, from a balcony above, two Australian Aboriginal boys offered to enter the fray and step between the sparring parties to effect a ceasefire.

The boys were Yued Noongar: Dirimera (13 years old) and Conaci (nine), from the Victoria Plains of Western Australia. They were journeying to Naples with the Benedictine monk Rosendo Salvado, who in 1847 had founded the New Norcia mission 132km north of Perth on their country.

The two boys were among five Yued Nyoongar children (including one girl, Ballomara, aged nine) taken to Europe from the mission between 1848 and 1851 as part of an attempt to “civilise” them as Benedictine and Ursuline novices. Their presentation to the courts of Europe was designed to showcase the successful evangelising of “Native” children, in order to raise funds for the struggling mission. 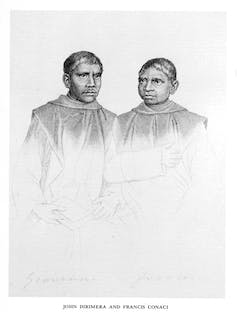 With acknowledgements to the Archives of the Benedictine Community of New Norcia. In Paris, under their wide eyes, a pack of Montagnards (Republicans of the Second French Republic) were protesting French military intervention in Rome, where the boys were ultimately headed. One of the boys (we don’t know who) asked Salvado who was fighting below them and why. Underestimating him, Salvado described the Montagnards as “bad men” whom the soldiers would fire on if they did not keep the peace. The boys watched intently, asking, rather poignantly, who would win if both sides had rifles. Salvado explained the bad men were outnumbered, so the soldiers would win. Read more: Friday essay: the 'great Australian silence' 50 years on It was then that one of the boys turned to Salvado and insisted the monk go out among them, take the Montagnards’ weapons, lock them in the hotel and stop the fighting. We will help you, he said. Salvado replied: “But this is not my country and I don’t know anyone here.” To which the boy made this striking retort: That doesn’t matter. You don’t belong to my country either, and you didn’t know the natives, but when they were getting ready to fight or had started, you went in among them, took their gidjis [the word Salvado used for Yued weapons] shut them up in the mission house, and it was all over. Why don’t you do the same here? The usually voluble Salvado was left speechless. He recounts this remarkable scene in his 1851 memoir: This argument, which was so much to the point and so unexpected from a boy who eight months before was wandering naked in the bush and was as uncivilised as only a native can be, left me bereft of a satisfactory reply. I did not want to tell him that in a case like this, it was easier to get good results from natives than from those who boasted that they had reached the acme of civilisation. Questions of sovereignty This boy born only a decade or so after the settlement of the Swan River Colony (1829) – whose country had been procured by dislocated Spanish monks – was indeed to the point. Arguably he had gone to the very crux of contemporary questions of sovereignty. He had let Salvado know this: you may have come onto our country, but that doesn’t make it yours. The boys drew an equivalence between European contests of sovereignty and what Salvado represented as tribal squabbles, easily put down with the authority of Christian intervention. Indeed in an engraving, one of a series illustrating Salvado’s memoir, the monks go among Aboriginal warriors and, with raised crosses, remove their weapons, quell the disturbance and retrieve and tend to the injured. 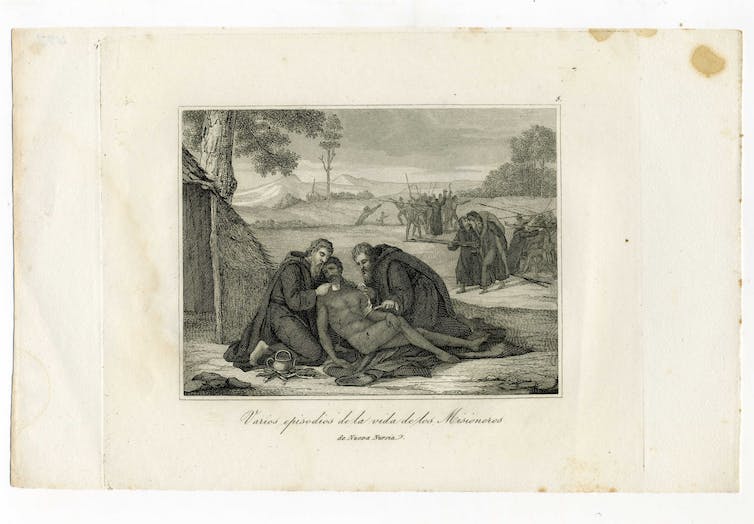 Monks tend to the injured in an engraving by Giuseppe Mochetti (c1788-?) 1852. Acc no 77603P. With acknowledgements to the Archives of the Benedictine Community of New Norcia But, in making this comparison, Conaci and Dirimera insisted on their intergenerational sovereignty. They did not consider themselves either dispossessed or disinherited. Read more: Indigenous treaties are meaningless without addressing the issue of sovereignty The boys had travelled through a contested Europe, fractured through civil war, revolution and secularisation. The 1848 revolutions, over 50, had swept the continent. Republicans had overthrown the sovereignty of Pope Pius IX over the Papal States and he had fled to Gaeta, where the boys would be vested by him in the black woollen habits of postulant Benedictines – a scene also engraved for Salvado’s memoir. 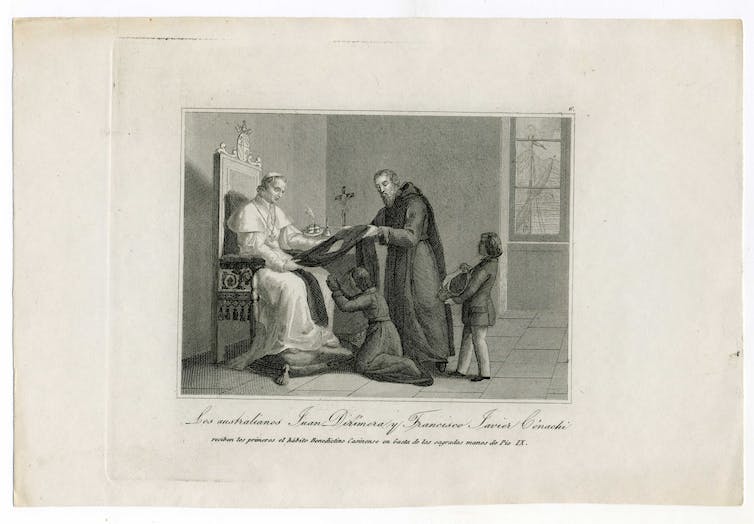 Engraving by Giuseppe Mochetti (1852) showing the boys being vested by Pope Pius IX. Acc no 77607P. With acknowledgements to the Archives of the Benedictine Community of New Norcia The soldiers who put down the insurrection under the boys’ Paris balcony served Louis-Napoléon Bonaparte. He would soon lead a coup, dissolving the French National Assembly to establish the Second Empire. Unsurprisingly, given his Catholic allegiances, Salvado described the protesters as “men who had been raised from the dregs of society”. A tragic ending The tragedy of this story is that within six years of that exchange in Paris, Conaci and Dirimera were both dead. 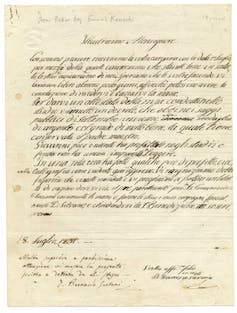 Letter from 12-year-old Francis Conaci to New Norcia founder Rosendo Salvado. July 18 1851. Acc no 05391. With acknowledgements to the Archives of the Benedictine Community of New Norcia Conaci’s progress as a postulate had been nothing short of astonishing. Within two years he wrote with command in Italian: “To give you proof of my behaviour in study, I send you a certificate that I got in the public examinations of September, with the mark ‘Very Good’, together with the silver medal…”. He had come second in his class. Yet he became ill, developing acute bronchitis, tonsillitis, gastritis, arthritis and measles. Conaci was found by the Incurables Hospital in Naples to have problems with his circulation and heart. He died in Rome in 1853, clutching his abdomen and crying out for the Madonna in the abbey attached to St Paul’s Basilica. His remains lie in an unmarked monks’ communal grave since entombed by a marble cloister. Dirimera returned home in 1855 but died of unknown causes within months. Aboriginal children are rarely named in the colonial archive. We know of a few, such as Matthina, born on Flinders Island to be adopted and then abandoned by Governor Sir John Franklin and his wife, Lady Jane Franklin. Yet most suffer the historical fate of “knee-high history”, in which children are difficult to discern in archival sources, particularly when colonised or enslaved. Their traces in the archive and community-held memory are critical in understanding what exactly was expunged or dislodged through missionary evangelising, child removal, institutional training, domestic and station work placements, adoption and incarceration. The remarkable story of Conaci and Dirimera’s journey has been told, but this moment on the Paris balcony speaks for the many Aboriginal children who, through their removal from their homelands, were destined to become unclaimant heirs to them. Protection board administrators, by fracturing them from country and family, effected their disinheritance. Yet, as Conaci and Dirimera show, these children went on dreaming of country.