Things are happening in the Pacific. The Pacific Labour Scheme officially commenced on July 1 this year, Pacific nations were added to the New Colombo Plan, high-speed undersea internet cables are in the works in the region, and the Prime Minister of Vanuatu and an island-hopping French President were recently in Australia.

Read more: As Emmanuel Macron heads to Australia, the relationship is more important than ever

But how prepared is the next generation of Australians for increased engagement with Australia’s eastern neighbours?

There are missed opportunities in the Australian Curriculum, specifically in French language classrooms, for transforming our view of the Pacific from a region often seen as a “big blue patch of water” to a place young Australians are connected to. We need to change the way we teach French so it acknowledges our Pacific neighbours and helps sustain political and socio-cultural relationships with these nations.

The French language can be an authentic and exciting context to learn about Australia’s East-side-neighbours.

French is a language of the Pacific too

Deeper engagement could be achieved with the Pacific through Australians learning native languages of various Pacific nations, but French is already the second most taught language in Australia.

French has been taught in Australia since the 1880s. But Australia’s proximity to French overseas territories – such as New Caledonia, Wallis and Futuna and French Polynesia – is not often studied in depth in French classrooms.

Specific attention has been drawn to the French Pacific islands in the latest iteration of the curriculum. It states that they’re important for Australia’s bilateral engagement in trade and investment, educational exchanges, research and development in science and technology, humanitarian and environmental initiatives, and communications, strategic and defence priorities. 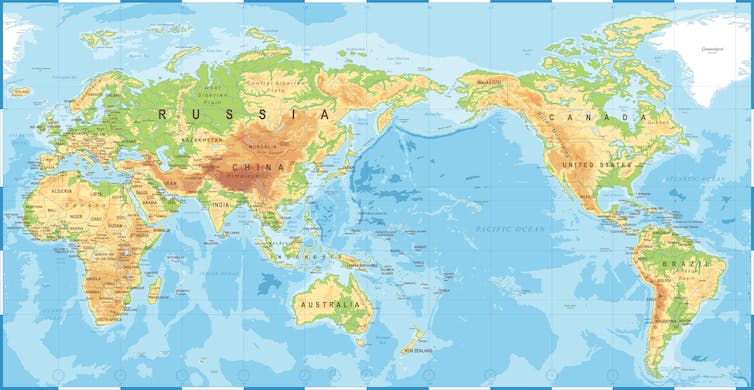 The Pacific is often presented as a big, empty blue patch of water. www.shutterstock.com

While the Pacific represents less than 1% of all French speakers worldwide, French is spoken by over half a million people in the region. It’s also one of the official languages of Vanuatu. 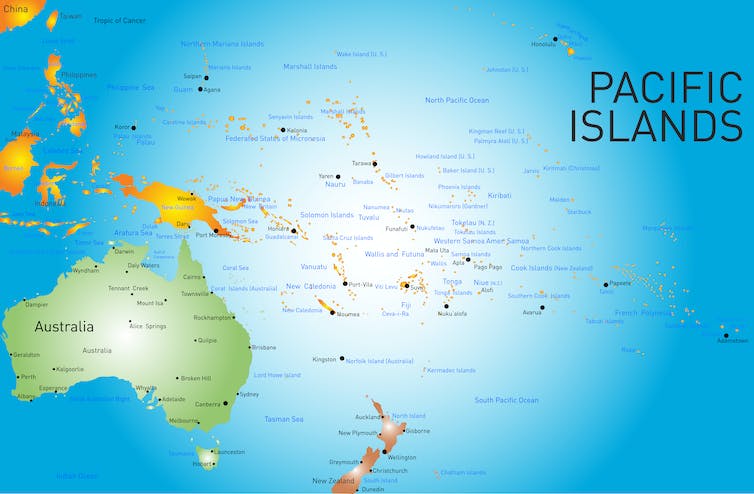 But the rationale of using the French language as a vehicle to educate young Australians about the Pacific isn’t in the number of speakers. It lies in its geography. French speakers are scattered across the Pacific region, providing an ideal platform to engage students in rich learning about all of Australia’s East-side neighbours.

Australia’s engagement with its East-side neighbours is predominantly undertaken by the Department of Foreign Affairs and Trade (DFAT). While DFAT’s role is critical, it’s not sufficient in creating and sustaining mutually beneficial and long-term partnerships between governments and the people they represent.

The vehicle of education, particularly on a large scale through schools, is integral to enhancing this relationship. We know this because of the success of the effort to increase knowledge of our North-side Asian neighbours through curriculum in the “Asian century”. It’s in Australia’s best interest to create a generation of young Australians who are willing and able to engage with their East-side neighbours as well. 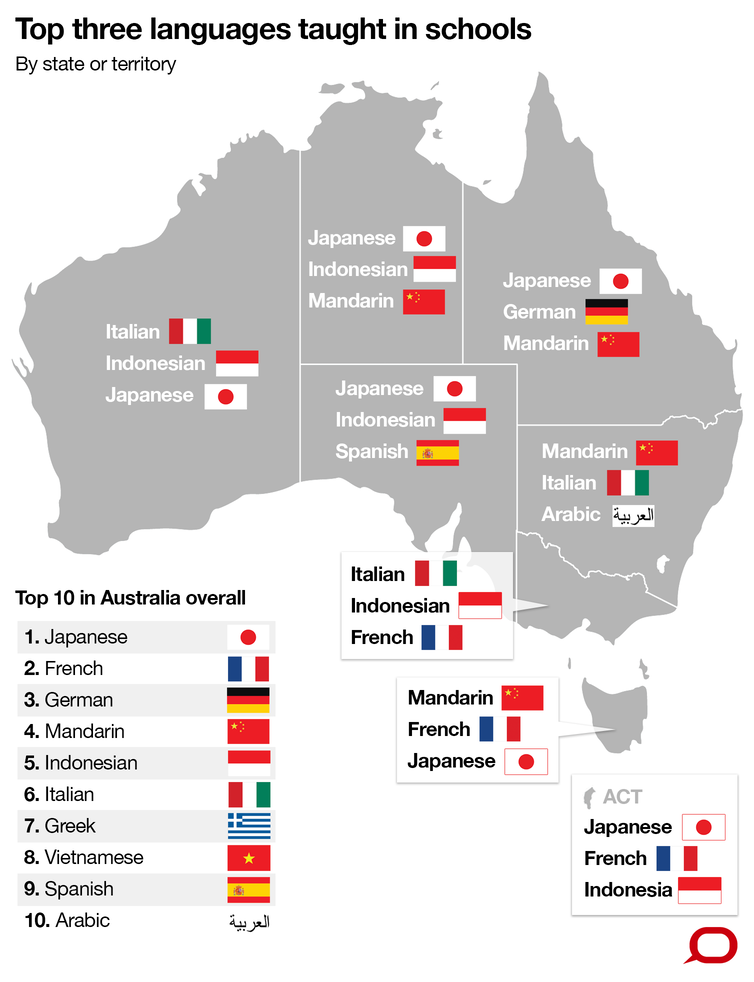 Midgley, 2017, CC BY-ND But research shows the lack of resources and strong perpetuating France-centric curriculum content make it hard for teachers to move towards teaching about French-speaking Pacific nations. Read more: The way French is taught in South Africa offers lessons in decolonisation Our research, conducted with teachers and schools in North Queensland, found it was possible to continue teaching to the Australian curriculum while developing knowledge of Australia’s East-side neighbours by using French Pacific examples and literature. At the university level, classical French novels were replaced by Pacific literature, such as Frédéric Ohlen’s Quintet. Such significant change was not always necessary in schools. It was possible to start small, with the context around greetings, families and daily life shifted to Pacific communities. For example, stereotypically beginner students of French are often exposed to introductory materials such as: Bonjour! Je m’appelle Pierre. J’habite à Paris en France. J’ai douze ans. (Hello! My name is Pierre. I live in Paris, France. I am 12.) In looking at the Pacific, one could say: Bonjour! Je m’appelle Manatea. J’habite à Puna’auia en Polynésie Française. J'ai onze ans. (Hello! My name is Manatea. I live in Puna’auia, French Polynesia. I am 11.) Other common contexts for teaching school French such as sports, food and schooling also worked effectively when focused on the East-side neighbours. When these changes were implemented over a full school term by the teachers in the study, students gained knowledge about the East-side neighbours and developed an open, curious attitude toward the Pacific and its people. In the words of one student: It was the first time I have learnt about these countries, so it was very interesting. Working towards a Pacific-literate nation The Pacific nations in this region are extremely vulnerable to environmental disasters and face other serious social, economic and political challenges. Australia shares an inevitable, interwoven future with these nations. Our proximity to and political connection with these nations provides the incentive for a shift in curriculum from a Euro- to Pacific-orientation. The French language is of geo-political significance to Australia. In the same way we transformed the curriculum for engagement with Asia, we need to transform the French classroom to develop understanding of and connectedness to the Pacific region and the people who live there.