Assuming feathers are superior to fur in terms of water protection and insulation, I’ve always wondered: why did mammals go the fur route, rather than developing feathers? – Shane, Perth

One of the main characteristics that distinguish mammals from birds, and other animals, is that mammals have hair or fur, and birds have feathers.

Read more: Curious Kids: How many dinosaurs in total lived on Earth during all periods?

While each group of animals requires varying degrees of insulation and waterproofing, the different animals also use hair and feathers for additional purposes – like sensing their environment, and courting displays. Together, all these roles affect an animal’s chances of survival and finding a mate to successfully reproduce with.

Both fur and feathers are part of the integumentary system, associated with the external covering of the body.

Often, we associate hair or fur with insulation. Sheep hair, called wool, is well recognised for its capacity to insulate, and humans have built whole industries based on its properties.

Of course, the number, type and colour of hair differs among mammalian species, and these characteristics are based on the specific mammal’s needs.

The naked mole-rat (Heterocephalus glaber), a blind subterranean mammal, has some scattered hairs (despite its name) – it uses these to navigate through associated sensory receptors. 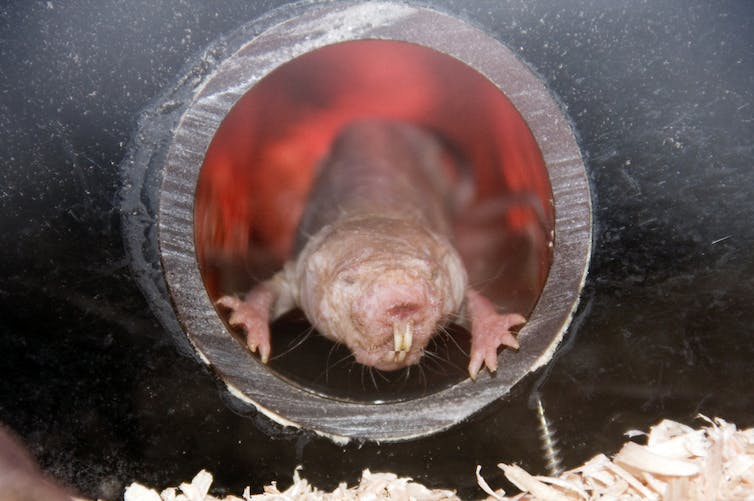 Despite its name, hairs on the naked mole rat provide sensory information to help it navigate underground. from www.shutterstock.com

Elephants also appear essentially hairless; however, they are covered in hair of varying lengths and densities. Like their ancestors the mammoths, modern day elephants have a large volume-to-surface-area ratio. So rather than an insulator, modern-day elephant hair enables heat loss and aids cooling.

Hair or coat colour affects the ability of hair to reflect solar radiation and insulate. Dark hair absorbs more radiant heat than lighter hair. For example, in the arid zones of outback Australia, the darker euro (also referred to as the common wallaroo, Macropus robustus) avoids heat behaviourally by moving out of the sun. The lighter-coloured red kangaroo (Macropus rufus) spends more time in open areas.

So hair colour is important for species who use basking in the sun to warm themselves and conserve energy. 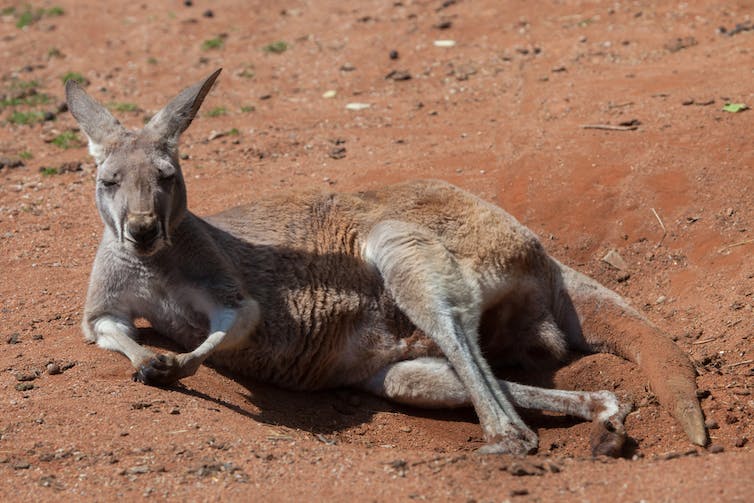 Just catching some rays – because I can. from www.shutterstock.com

Zebras (Equis species) have black and white striped fur to reduce insect attack and confuse biting flies. Scientists have found all white or all dark coloured horse species and related species are more readily bitten by flies than striped zebras.

Hair can also play a role in defence for species such as porcupines, echidnas and hedgehogs. Porcupines have modified hairs called quills, while echidnas and hedgehogs have hollow spines, both covered in a thick layer of keratin. The animals also have bristles, underfur, and/or hair among their quills or spines, and on their bellies. 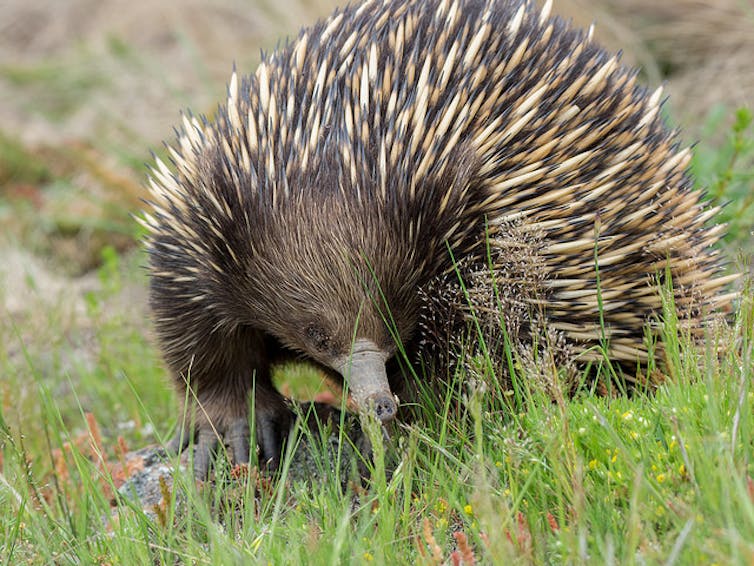 There are two main types of feathers: vaned feathers and down feathers.

Vaned feathers have a rachis or shaft, with barbs branching off, and smaller barbules branching off the barbs. Down feathers lack barbles, and are fluffy in appearance.

Down feathers are responsible for insulation, and are the feathers we use in our doonas, whilst vaned feathers aid flight. 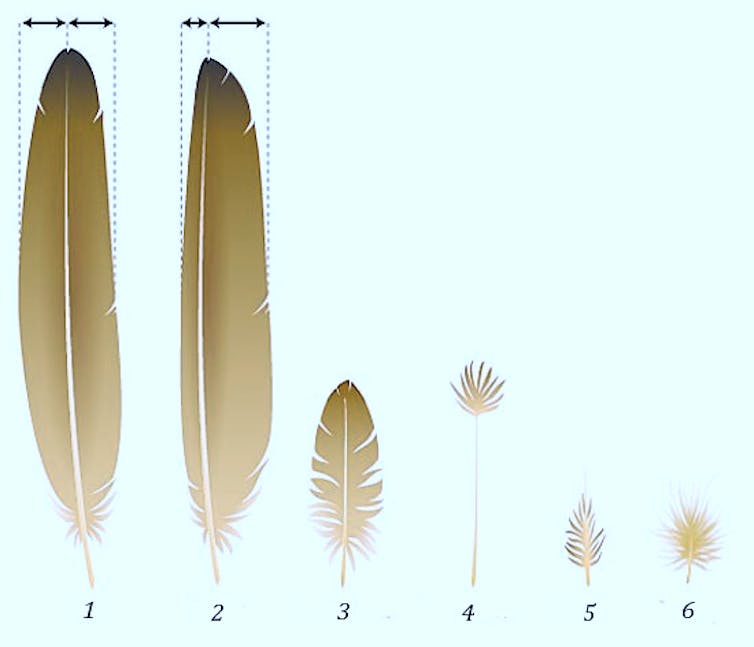 In some birds, the barbles on vaned feathers produce a powder that aids waterproofing.

Birds also have a uropygial gland located towards the base of their tail. It provides wax-like substances to aid feather preening and maintenance, and likely provides an additional water proofing as well.

There is one further type of feather, that is very specialised: the piloplume. These feathers are used by males to display to females and attract a mate. Generally speaking, this is why male birds are often more colourful than female birds. 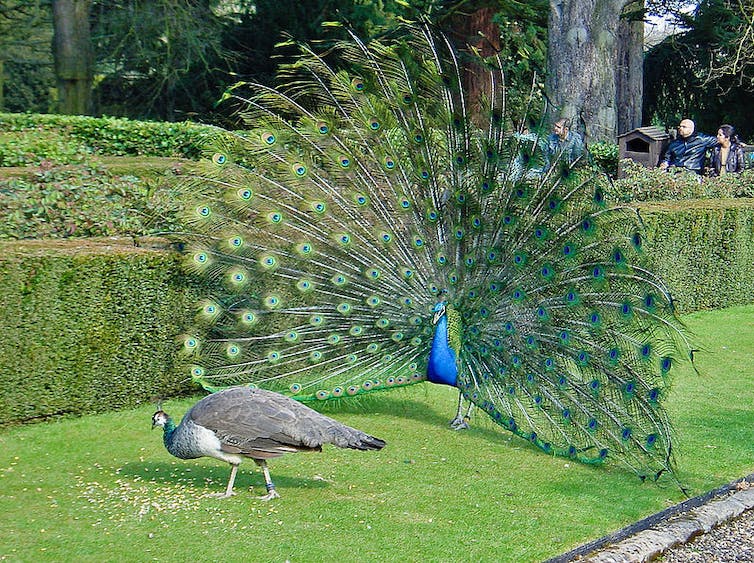 These tail feathers have the sole function of looking good. Wikimedia Commons, CC BY

Mammals use different methods to display to females and to attract mates. Deer display strength and agility to females through antlers, whales use song, while other mammals, such as cats, use scent.

Finding a mate is of course essential to produce the next generation. And feathers and fur play key roles in making sure that happens.