More and more people are adopting plant-based diets in Australia and other western nations. But also seemingly on the rise is resentment towards vegans and vegetarians.

This can range from ridicule on social media sites (“Nobody likes a vegetarian”) to bumper stickers (“Vegetarian is an old Indian word for bad hunter”). Recently, the editor of the UK Waitrose magazine, William Sitwell, stepped down after he called for a piece about vegans that would “expose their hypocrisy”.

There has been a term coined for this backlash: “vegaphobia”. There are even self-help books, such as Living among Meat Eaters: The Vegetarian’s Survival Handbook which offers advice to those whose dietary choices might be under attack.

So what is it about vegans that is so annoying?

Read more: Why you should eat a plant-based diet, but that doesn't mean being a vegetarian

On their high horse

One reason vegetarians and vegans are the target of this negativity may be thanks to their sometimes overtly moral behaviour, in the same way that a “goody two shoes” might annoy us. In one US study nearly half of all participants already felt negatively towards vegetarians. They became even more resentful when they felt that vegetarians considered themselves to be morally superior to omnivores.

These findings are echoed by the results of my interviews with omnivores in Australia, which have shown that plant-based eaters are deemed, by some, to be “snobbish” and “elitist”.

The perception of a moral reproach can also trigger resentment in others. For example, an ad from PETA suggested that “feeding kids meat is child abuse”. While such advertisements may attract attention, the use of strong guilt in messaging like this may also backfire.

This might explain the attitudes of the residents in a town called Aargau, in Switzerland, who in 2017 called for the denial of citizenship to a foreign vegan resident. She was deemed “annoying” and critical of local Swiss customs, which include hunting, piglet racing, and cows wearing cowbells.

Another source of annoyance may be the so-called “militant vegan” who tends to use tactics of admonishment and intimidation, such as the vegan activists who splashed fake blood on French butchers’ displays. Another recent example are the negative comments made by some plant-based food supporters after the death of omnivore chef Anthony Bourdain. There were subsequently criticised by vegan activist Gary Francione for their moral insensitivity and intolerance. 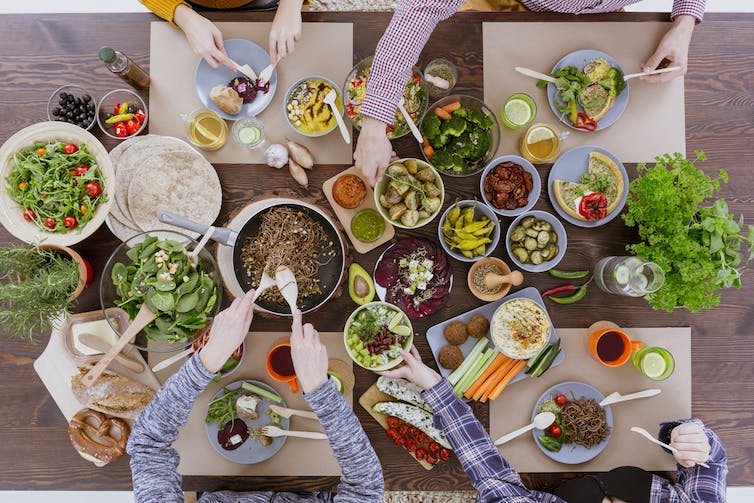 Rather than an all-or-nothing approach, advocating for meat-free days or a ‘reducetarian’ diet may be more appealing to omnivores. Shutterstock

A key reason people adopt a plant-based diet is concerns about animal cruelty and suffering. Several activist organisations, in a bid to encourage people to reduce meat consumption, highlight the mistreatment and slaughter of animals by showing graphic and often shocking images which can trigger strong emotions.

This tactic, while effective in attracting attention, can also backfire. For one, exposure to animal cruelty can be overwhelming to the point where the audience may block out the information. It can make people avoid taking further action.

Read more: Do vegetarians live longer? Probably, but not because they're vegetarian

When exposed to the plight of an animal suffering, many people get upset and wish for the cruelty to end. This is all well and good, but there is a risk that such communications will foster negative attitudes towards the message sender as well. Repeated exposure to messages about animal cruelty may also, in the long run, result in the audience getting accustomed to such messages and they may eventually begin to ignore it due to emotional numbing or apathy.

Sudden awareness of animal cruelty may also create pain and loneliness while others may feel powerless, especially if denied the psychological benefit of helping others.

On the other hand, there are messages vegans and vegetarians can use that may be received better. These include incremental changes such as promoting meat-free Mondays, or becoming a “reducetarian”. These would give the audience a vision to aspire to and motivates them to attain it.

Brian Kateman, co-founder and president of the Reducetarian Foundation, highlights a similar message to many vegan campaigns today, that meat-intensive diets are worse for our health, the environment, and for the animals we eat.

But while many vegan campaigns messages advocate an all-or-nothing approach, that only eliminating meat is the answer, realistically it might not be possible for everyone to do so. Hence, reducetarianism might be a more achievable middle ground.

Despite the growing popularity of the plant-based food movement, it seems that the respect and empathy for animals which lies at the very heart of this movement could perhaps also be extended towards others who make different choices and, in doing so, open the doors towards greater acceptance.