Australian productions of Richard Wagner’s Die Meistersinger von Nürnberg (The Mastersingers of Nuremburg) are rare and for those of us attending the opening night of Opera Australia’s production in Melbourne, it is easy enough to see why.

Die Meistersinger is an extravagantly long, complex, and resource-intensive piece of theatre. But this, in turn, reflects the ambition of the composer to create works that would have an equally grandiose social and political impact on audiences.

For economic reasons alone, co-productions make particular sense, and here Opera Australia has collaborated with the Royal Opera House, Covent Garden, and the National Centre for the Performing Arts, Beijing, to mount a production conceived by the Royal Opera’s then house director, Kasper Holten, in 2017.

Holten’s work has typically divided critics, and this production is no exception. When it premiered in London, the Spectator’s Michael Tanner declared, “Nothing could prepare me for so deep an abyss of idiocy”. Others, however, have found Holton’s directorial interventions to be revelatory.

Such a stark division of opinion reflects the nature of so-called Regieoper, a style of production where a director feels licensed, if not obliged, to reinterpret the largely 19th century Western European operatic canon in order to reflect contemporary sensibilities and concerns. 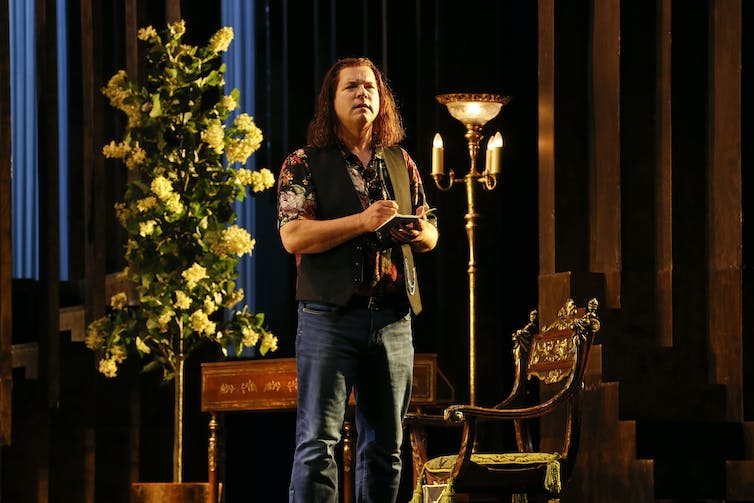 Wagner’s works are, however, particularly ripe for such treatment because he was himself a pioneering modern dramatist. His operas foreshadow cinematic styles and techniques as well as the themes and interests of symbolist and psychoanalytical drama.

While Die Meistersinger stands apart from Wagner’s other works in being grounded more in historical, rather than mythical, materials (we find here, for instance, no goddesses with winged helmets, nor knights arriving on the backs of swans and the main character, the cobbler and poet Hans Sachs, is based on an actual historical figure), he still ultimately gives this material a mythic frame.

The setting of the opera, the city of Nuremburg, a town in the geographical heart of Teutonic Europe, serves as the embodiment of the spirit of the German people writ-large. The singing competition that lies at the heart of the opera’s plot thus acts as a means for Wagner to proselytize what he considers to be quintessentially German cultural qualities and virtues.

It was no surprise, then, that Die Meistersinger eventually became a favourite work of the opera-loving leader of the Third Reich. The work was performed, for instance, at Adolf Hitler’s formal inauguration in March 1933.

And the character of Sixtus Beckmesser (here brilliantly sung and acted by Warwick Fyfe), the one person in the opera who does not seem to be able to “get” what makes German art great, has more recently been interpreted as an evocation of anti-Semitic tropes. Certainly we know from his own writings that Wagner believed that Jews were a corrupting influence on “true” German culture. 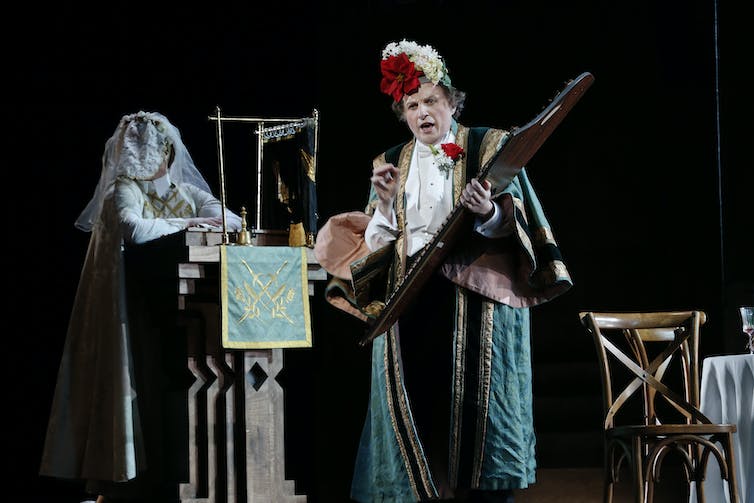 As is so often the case, Wagner’s works (as opposed to Wagner the man), ultimately defy straightforward interpretations. Beckmesser’s role as a comic foil in the opera derives from his musical (and, by extension cultural) conservatism. Yet, despite his eventual public humiliation, by the end of the opera Hans Sachs seems ultimately to support his point of view, declaring that Germans should honour their masters. Even if Germany itself were to disappear as a political entity, he declares, “Still would remain/ Our sacred German Art”.

One of the benefits of Holten’s staging is that what we see and hear at this point, however, is no longer a simple, direct, appeal, but rather a knowing representation of one. Similarly, Holten is also interested in reminding us of the gendered aspect underpinning Wagner’s drama.

At the conclusion of the opera, in defiance not only of her father, and the men-folk of Nurenburg, but in defiance of the opera itself, Eva quite literally walks off stage. She refuses to play her otherwise pre-destined role as a wife and mother, or indeed as Walther von Stolzing’s ‘prize’. 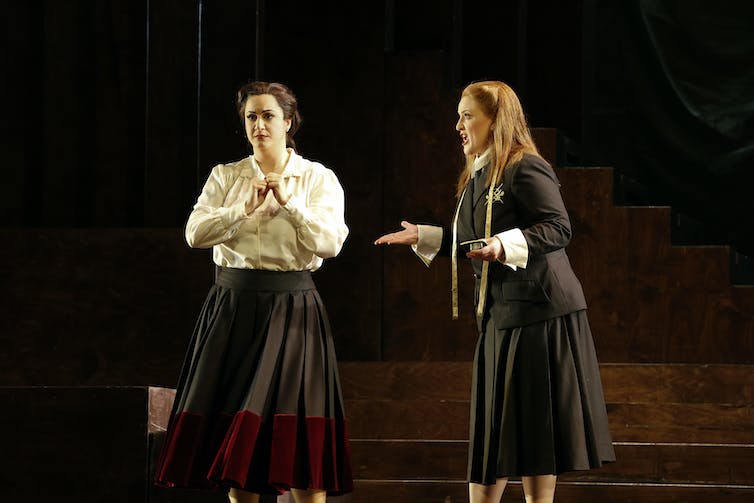 Natalie Aroyan as Eva and Dominica Matthews as Magdalene in the Melbourne production. Jeff Busby

It’s a clever move. But here, too, it does not close the issue. What, then, do we make of Eva’s actions given that she also sincerely loves Walther? Does not her act of freedom come at the price of emotional honesty? Gender politics aside, is it not an uncomfortable truth (for both sexes) that loving another always involves always a degree of personal compromise?

I suspect Wagner himself, however, would not have been upset were we to contemplate such issues, given his own lifelong interest in the struggle we all face to reconcile the competing demands of social and personal integrity. And it is one sign that this, ultimately, is a successful production. It is also terrific to see the full stage of the State Theatre in use. So often Melbourne audiences for Opera Australia productions have had to put up with “cut down” stagings that were designed initially for the much smaller dimensions of the Joan Sutherland Theatre at the Sydney Opera House. 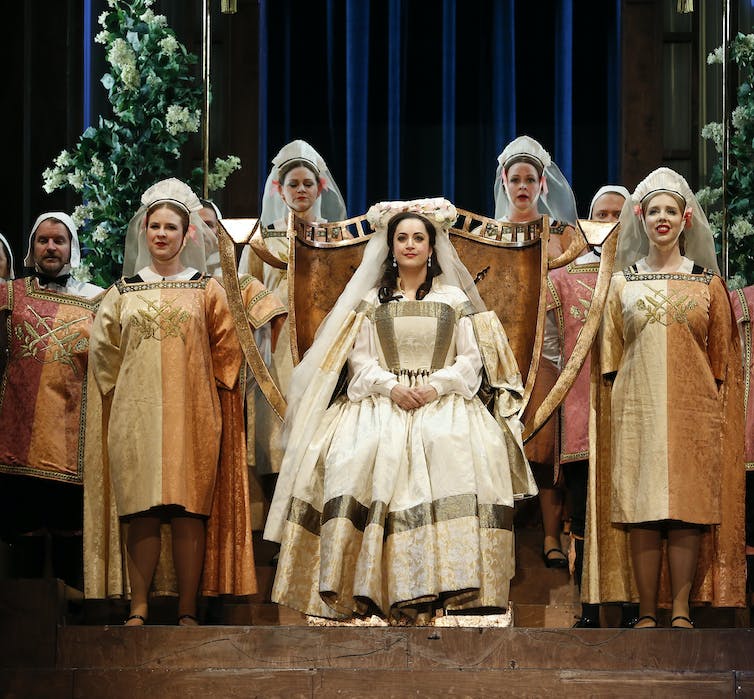 Hans Sachs was sung beautifully by German bass-baritone Michael Kupfer-Radecky even if he didn’t quite have the vocal gravitas that both role and the venue really required. Vocal presence was certainly not an issue for Stefan Vinke as Walther von Stolzing, but he did not sound comfortable meeting the exceptional technical demands of the role.

The minor principals and chorus, however, all acquitted themselves admirably. Any quibbles aside, this is a great ensemble performance by Opera Australia and well worth a listen and look.